A Return Engagement by Stephanie Laurens 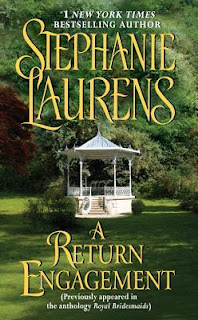 Everyone's eyes are on a royal couple, but there is more behind the scenes than they'll ever know.

Lady Nell Daughtry is certain her sister will be a perfect princess, if only she gets the reluctant bride safely to the church to marry Prince Frederick of Lautenberg.

But what she doesn't know is that, in the wedding party, she's been paired with her former fiancé, Robert Knightly … and now she'll be face-to-face with the man who walked away.


❤ ❤ ❤ ❤ ❤
Confession time (and I'm completely being honest here): I'm not a big fan of historical romances. Sorry! I don't know why that is. I've read a couple that I really liked (most of which were friend recommendations), but I haven't read a lot. As an Avon Addict, I want to try different genres and I decided that my goal for the rest of August and September is to get onto the historical romance train and get over my fear of them. I thought it would be easier to start off with a novella and I picked up Stephanie Laurens' A Return Engagement. I actually really enjoyed it. It was such a cute story of fate and a second chance at love. My only problem with it was the length. I would have loved a full length book with more of the history between Robert and Nell. For most of the novella I kept wondering if I was missing something. I didn't like how it just started with them seeing each other again for the first time in several years. Of course, it was all explained towards the end of the story, but I think I would have liked it better as a prologue or a brief opening chapter. Other than that, I enjoyed the story. I liked Robert and Nell. I thought they were cute together. Nell was embarrassed and apprehensive about seeing Robert after she broke their engagement. Meanwhile, Robert wanted answers and constantly looks for the best opportunity to get them from Nell. I liked his persistence. I thought the curse was a funny addition. Poor Nell and her sister. All they needed were good clunks to the noggin. All in all, it was cute story, but I felt there was something missing.
Posted by CrystalBee at 3:00 AM