Game On by Tracy Solheim 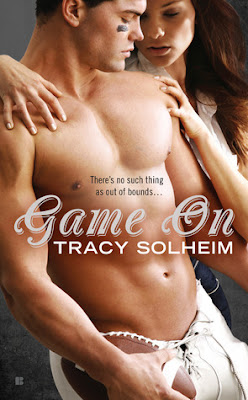 Game On
Out of Bounds #1
Author: Tracy Solheim
Published: May 7, 2013
Publisher: Berkley

The only way to win is to score…

With a reputation for fast moves on the gridiron and even faster moves off the field, Shane Devlin was a player in every sense of the word. Unfortunately, his bad-boy persona has made him a risky prospect as a quarterback, and only the Baltimore Blaze are willing to give him a chance. And he’s about to take a hit he never expected.

Working for the Blaze, Carly March knows too well how jocks think—and what they think with—so she’s always made a point of keeping them at arm’s length. But when she shares a kiss with the devilishly handsome Shane, she finds it hard to play by her own rules—and even harder to resist him.

Can a football hero and a business-minded beauty take it all the way? Or will their mutual attraction cost them the big game?


~~~~~~~~~~
Can we stop for a moment to study the hotness of this cover?
Hmm? What was I saying? Oh yeah, my thoughts on Tracy Solheim's debut novel, Game On. Sports is one of my absolute favorite themes for a romance book. I will always gravitate towards them. Baseball, hockey, football - I don't care what the sport is, I am a happy girl when I have one in my hands. That said, I adored Game On. It had its funny moments mixed with some sexy moments and incredibly sad moments. It had a lot going on . . .
Shane Devlin is a "bad boy" quarterback in the NFL. He puts on a "devil may care" attitude to push people away. Carly March is the sweetest character. She feels a bit out of place with her family and friends, but she loves them. Both characters have had a rough childhood. Shane and Carly both lost their mothers and were abandoned by their fathers. Both characters also have a lot of trust and love issues. It took a lot for them to overcome their past to find happiness.
Like I said, I adored this book. Yes, there is a lot of drama (a stalker, deaths in the family, abandonment), but I thought it brought a lot to the story. I love a story with a lot of beef and Game On had it. The drama and the horrible childhoods of Shane and Carly made me love them. It made me want to root for them. Shane is a bit of an ass to Troy, but it almost made sense considering Troy the symbol of a childhood that was ripped away from Shane. Before the death of his parents, Troy had everything Shane dreamed of at his age and it tore at him. Understandably, it took Shane awhile to warm up to Troy, but it was sweet once he did. On the other hand, Carly was ready to fall in love, just not with another jock. The more time she spends with Shane and Troy, she becomes the catalyst that brings the brothers closer together and forces Shane to open his heart to both of them.
I am in awe that this was Tracy's debut novel and I can't wait for the next two books in the series.