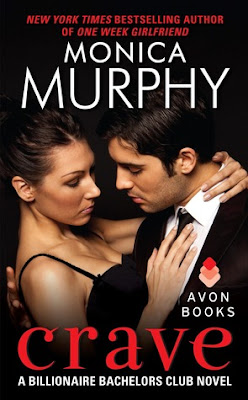 Billionaire Archer Bancroft always gets what he wants—and he’s wanted Ivy Emerson, his best friend’s sister, for far too long. Being forbidden and untouchable only makes her more tempting. When a million-dollar bet with his friends throws down a challenge—last bachelor standing takes all—Archer knows he can win. That is, until one enchanted evening with Ivy takes his heart for a ride.

Ivy knows Archer is nothing but bad news: Infuriating, arrogant…and completely intoxicating. But despite her best efforts, she can’t seem to keep away. When a stolen kiss leads to a night of heated passion, Ivy realizes she’s in trouble and in head over heels.

But in the light of day, everything seems clearer and Archer’s not so sure a one-night stand is all he wants. Concocting a plan to keep Ivy by his side, Archer might just be willing to lose this bet…and win the jackpot instead.


* * * * * * * *
Monica Murphy's Crave ﻿is the story of Archer and Ivy, two people that have known each other for most of their lives. As the younger sister of his best friend, Archer naturally bumped heads with Ivy for most of their friendship. That changed once she turned 18 and their arguments turned into a strange form of foreplay. They argued and he got turned on. Thanks to his parent's loveless marriage, Archer never pursues a relationship long enough to even think about settling down. Knowing this, he agrees on a bet with his two best friends, Matt and Gage, in which the last man standing wins. Thinking he's got it in the bag, Archer and Ivy share a heated night that leaves both of them wanting more.
I love a book with a friends-to-lovers romance! Crave was adorable. It was fun to watch Archer and Ivy argue until they turned blue in the face only to realize that it was foreplay for them. The more they bickered, the more they wanted each other. For a shorter book, I felt that the 1st person POV switching between Archer and Ivy allowed the author to go deeper into both character's thoughts and feelings. It definitely gave another layer to the story. I loved seeing Archer's thoughts as he worked through his emotions and realize that he was in love with Ivy. Same for Ivy. She had to learn that she's happy with the way she is and she doesn't have to keep picking out the losers that didn't make her happy. She knows what she wants and damn it, she'll get him. The only thing I wish had been explored more was Archer's groveling at the end. I would have loved to find out what Gage's reaction was when Archer finally came clean to him about his relationship with Ivy and as Archer made amends for his mistake. That would have been an interesting moment. It would have been fantastic if Ivy had walked in on that conversation. *snicker*
Crave was a great introduction into the new series. I'm looking forward to reading Gage's story, Torn. I wonder why he was so distracted in this book . . .
Posted by CrystalBee at 3:00 AM