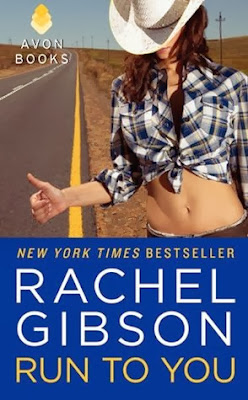 There's nothing like fleeing Miami to ruin a girl's day. Stella Leon's bartending gig was going fine until gorgeous ex-Marine Beau Junger decked her mob-connected boss, spirited her out of the city, and claimed that Stella's half-sister--the one with the perfect life--sent him. Now Stella has no choice but to go along for the ride... and seduce Beau's military-issue socks off...

The Marine Corps was Beau's escape from his old man's legacy of naval heroism and serial philandering, but no amount of training could prepare him for the day he looked in the mirror and saw his father staring back. The answer: swear off meaningless sex. Oh, and find a way to make Stella Leon quit being so damn hot...

As with all of her books, I loved this one. With that said, it didn't seem like a tradition Rachel Gibson book. When I think of her books, five things come to mind. Loveable characters? Check. Funny and humorous scenes? Check. Sex? Check plus 300 pages of foreplay. Witty writing? Check. Fun, easy-going plot? Not really. Sure, Run to You had a lot of fun scenes, but overall, the story felt darker than her previous books. I absolutely loved it. I felt it was darker because Beau and Stella are two damaged characters. Both had fathers that were not there for them. Beau hated his father for repeatedly cheating on his mom. Stella's father did not want her period. He paid off her mother to stay away from him. Its the actions of their fathers that initially turned them against love. In this time of their lives (Beau in his late 30's and Stella in her late 20's), they've decided to not have sex until marriage or until they fall in love. I appreciated the fact that they did not like each other right off the bat. She thought he was a grumpy Gus (and he was) and he thought she was a pain in the ass (which she was). They drove each other bat-shit crazy and I enjoyed every moment of it. It took a lot for them to give in to their temptations an jump each other. Essentially, they had 300 pages of foreplay. This is going to seriously sound wrong, but I wish we had seen more of their moments leading up to having sex. Before you think I'm a pervert, let me explain. I wish we had seen more of their connection on the deeper level. We already know they care for each other in their own crazy way. They have some seriously hot foreplay without having sex, but what about afterwards? What was the morning after like? How was it like to wake up in each other's arms? I wanted more of that connection. When they do finally have sex, it is so adorably sweet and hot. And I am glad Stella initiated it. You. Go. Girl! I just wanted more of their deeper connection.

There are some returning characters in this book, including one special cameo by a character we've just met not too long ago. I love it when we meet Rachel's characters again.

Overall, I adored Run to You.  I'm hoping that the next story in the Lovett, Texas series is Blake's. The guy needs to settle down like this brother. Preferably in Lovett because I want to revisit the town.


Don't forget about my current giveaway for copies of Rachel Gibson's Simply Irresistible and See Jane Score. Enter by filling out the Rafflecopter below. It is only open to U.S. residents.
To earn the 10 extra entries, you must post on ALL of my T.G.P. posts (excluding #3.5). There will be at least 7 T.G.P. posts that will be published before the giveaway ends.