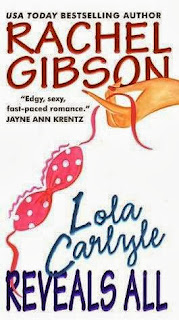 When ex-supermodel Lola Carlyle learns that some very -- ahem -- private photos of herself are being peddled on the Internet, she hides out where there's sun and -- she thinks -- safety, until the gossip dies out. Then the private yacht she's blissfully napping on is "commandeered" by some man who says his name is Max Zamora, and that he works for the government.

It sounds crazy, but Max is telling the truth -- his cover's been blown, he's on the run, and now he's confronted by a very angry -- and beautiful -- woman. He's seen Lola before -- barely clothed on covers of fashion magazines. But she's more beautiful in person. From the top of her pert blonde head to the tips of her little painted toes, Max finds her sexy, curvy... and a pain in the butt. And that's before she blows up the ship!

Now, the unlikely pair is stranded in the middle of the ocean, it's getting very hot -- not just from the sun -- and Lola is about to reveal it all...

When I first read Lola Carlyle Reveals All many moons ago, it wasn't a favorite of mine. Honestly, I think it was because I couldn't grasp the two main characters. They just never seemed to click for me. This book was the reason why I wanted to do the Gibson Project. It had been years since I've read  Lola Carlyle Reveals All and I wanted to see if it'd grow on me this time around. I'm happy to say that it did and I really enjoyed it. Character wise, I loved Max. He's a bit rough around the edges, but he once he shows his true side, you realize he's a good guy. I adored the scenes of him saving Lola and B.D. when the dog almost drowned. Who wouldn't love a guy that'll make a doggy floatation device? Definitely swoon worthy. I'm afraid Lola didn't warm up to me as much as Max did. I liked how she gave Max a hard time with all of the questions, but there was something about her that seemed a little flighty to me. I did like her more this time, though! :o)

The other aspect of the book that I appreciated more this time around was the fact that Max and Lola were the only two characters for the majority of the book. They were essentially forced to get to know each other before taking things further. They also had to depend on each other for survival. I love books with this type of storyline. I know for a fact that it was lost on me the first time I read the book and I felt like it gave the book more substance this read through.

I'm so glad I finally sat down to re-read Lola Carlyle Reveals All. I think it needs a new cover, though. Just sayin'.

Enter by filling out the Rafflecopter below. It is only open to U.S. residents.
http://www.rafflecopter.com/rafl/display/9859302/" rel="nofollow">a Rafflecopter giveaway