Less Than Perfect by Kelly Jensen 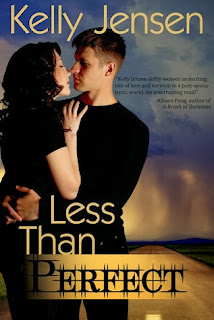 "It's hard to imagine what our planet might look like in a hundred years. Green, probably. Despite difficulty imagining, the extent of decay a century might encourage, I do think we'll still find perfectly preserved bricks of ramen. And they'll probably taste just the same." - Less Than Perfect

Mikayla’s read every book in her collection of post-apocalyptic novels at least twice. She thinks she’s prepared for aliens taking over Earth. She’s not.

Nor is she prepared for the attention of a good-looking refugee named Reg.

All Mikayla and Reg want is a safe place to see out the end of the world, hidden away from the aliens that call themselves The People, but cities of the depopulated United States not infested with The People are rife with gangs, the detritus of civilization and disease.

On a mission to restock their supplies, Mikayla and Reg are captured by The People and prepared for the procedure that will make them perfect, but no longer quite human. In order to escape, they need to rely on each other…if Mikayla can trust a man who seems too good to be true.

I don't like aliens. Ask me if I've ever watched any of the Alien movies and the answer would be a resounding no. They freak me out. Whether peaceful or hostile, I don't care. They freak me out. What else freaks me out? The idea of "perfect" people, much like the movie Surrogates. Why am I confessing this? Well, that is what Less Than Perfect is about. Aliens have invaded our planet! At first, they seem peaceful. They offer to help us better our society by taking away our faults and making us perfect. You have freckles? No problem! Glasses? Speech impediment? Broken bone? The People will change you to be perfect. They'll send your friends, family, and even complete strangers to lure you into their traps. Word of advice - don't drink the lemonade.

*looks at the glass of lemonade sitting on her desk*

Both Mikayla and Reg fought to survive. They've had to go through unmistakable horror to find the small amount of normalcy with Hiram and Beth. When they are discovered and forced to go on the run, it takes a strong person to not give in. Both Mikayla and Reg are strong characters. When one of them is down, the other will stop at nothing to protect them. Through the ugliness around them, they also found love. Their romance starts off with innocent kisses in a time of crisis. They gradually get to know each other. As Mikayla and Reg start sharing their past and how they survived, they start to get closer and begin to depend on each other for survival. The same goes for the relationships with Hiram and Beth in the beginning of the book and their new friends in the end of the book. Each and every character carried their weight in the story and each character brought their own strengths for survival.

I really enjoyed Less Than Perfect. This is going to sound weird, but I liked how balanced it was. It wasn't too gory/creepy. The way that Kelly Jensen described The People and how they were making people "perfect" freaked me out. Where people sacrificed for the greater good? Where did the perfect people go afterwards? And what the hell was in the lemonade? There was also a strong balance between the ugly (life after invasion) and the pretty (the sweet romance between Mikayla and Reg) was spot on. I actually thought the romance between Mikayla and Reg made the book a lot lighter. It didn't seem out of place. Not too many romances makes us question things, but this one did. How did The People know how much our society can value perfection? What would absolute perfection do to a society? For me, questions like that fueled the book and kept me awake until I finished it at 3 o'clock in the morning. Perfection ruined the world in Less Than Perfect. The only ones left were people that questioned perfection and criminals that thrived off the dissolution of society. Those that fought to survive not only had to fight the aliens, they also had to fight off those that thrived off the chaos. Good luck...

Don't get me wrong, I still don't like aliens. Just thinking about what the aliens were doing to people to make them perfect freaks me out. I think that's why I enjoyed Less Than Perfect as much as I did. I do love a good scary story.

...but I'm still not watching Alien.
Posted by CrystalBee at 3:00 AM