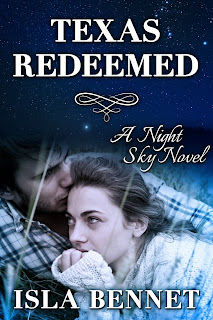 "Nobody expects you to bounce back right away. Losing someone you love isn't quick and painless." - Felicity

Ranch owner Valerie Jordan learned the hard way that people carve out their own destiny. She knows firsthand what can come of one night of unchecked attraction and lost inhibitions. And she also knows there’s only one way to handle guarded missionary doctor Peyton Turner: with caution. Thirteen years ago, they went from being friends to lovers to strangers. To save himself and outrun his past, Peyton disappeared. Now the prodigal son of Night Sky, Texas, is home—though he has no intention of staying. But once the revelation that he and Valerie share a troubled teenage daughter sends him on a hunt for answers, there’s no avoiding one another…no ignoring the undeniable desire that draws them together.

Texas Redeemed is a passionately written and emotionally gripping story of lust and risk, love and forgiveness, of confronting the damaging secrets of the past for a chance at redemption.

Never have I fallen so deeply for a group of characters than I have for the citizens of Night Sky, Texas. Texas Redeemed stole my breath. I sat there for 10 minutes after I finished reading just to settle my emotions. It is such a beautiful story of friendship, love, and redemption. None of the characters are perfect. Every single one of them has flaws, but it is those flaws that bring out the best in them. The story is beautifully written. I loved both the sudden attraction between Valerie and Peyton and their slow dance around each other. It took them awhile to trust each other enough to the take step forward towards a relationship together. I loved watching the two of them get to know each other again. The same with Peyton and his daughter. Heck, Peyton with the entire town. I loved that Peyton was able to stand up to his demons and move past them. Valerie is a very strong character. She's loving, fiercely protective, and resilient. She's been through so much with being a single mother, losing her daughter to an illness, and now watching her other daughter spiral out of control. Its amazing what she's able to deal with. There are so may secondary characters that are going through their own problems. The best thing about Night Sky, Texas is that nobody will let them fail without safety net.

I loved the story. I loved the characters. The cover is absolutely gorgeous. I tend to say this a lot, but I can't wait for the next books in the Night Sky series. I want to know more about these characters.

Bravo Isla, for creating such an amazing debut novel.


❤ ❤ ❤ ❤ ❤
Excerpt
Valerie could match his stubbornness measure for measure. “I’m not leaving then.”

He swaggered into the bathroom, then came the sounds of a toilet flushing and water running. He appeared in the doorway with a toothbrush sticking out of his mouth. “Still here?”

“I said I’m not leaving.” She emphasized her point by sitting at the foot of the bed.

Peyton said nothing more as he brushed and rinsed, then stalked into the bedroom to grab a pair of crumpled jeans from the floor and yank them on. “You look good in my bed, Val.”

“Seriously, that’s not why I’m here.” She walked to the opposite side of the room. “So what’s with the scar? Did you miss the patient when you were operating?”

The look he gave her was grim. “I was mugged and stabbed while I was on a mission. It happened a long time ago and as you can see, I’m fine. Luckily, all my necessary parts function.”

She mentally cringed when she met his eyes at the words necessary parts. “I don’t believe in luck.”

He ventured closer. “What do you believe?”

“That you have some ridiculous death wish.”

Frustrated, she shoved his shoulder. “Quit brushing off what I say. You’re a doctor who works in the most dangerous places. You’re Anthony Turner’s boy, the rebel—the guy who rode around on a motorcycle at crazy speeds and got into trouble left and right. You never give a damn what happens to you, and you never consider the people who might care.”

“You actually care, Valerie?” His eyes were shuttered, the words a low rumble.

“We—because we’re friends.” At his harsh look, she continued, “Isn’t that what you want? Us to be buddies again?”

“You want to be friends with the guy who hauled ass out of this town thirteen years ago. That’s not me. I’m different, Valerie. I’m not that man, and too much has gone down for me to want to be. And if you don’t realize that, you’re making a mistake.” He brought his lips toward hers, almost touching her. “Get to know me.”

“I want to learn you.” This time he did touch her, tracing the scar next to her eye with the tip of his finger before molding both hands to her buttocks and urging her forward.

Instantly she felt his heat … and the need to have his hands right where they were, but with her skirt out of the way. Something in the way he squeezed her flesh and parted her legs with one of his told her he was more than ready to fulfill that need.

Isla Bennet’s first encounter with a smoldering hero was on the junior high school bus—between the pages of a novel. Books have been her constant through growing up in the Midwest, partaking in some wicked travels, and working as a bookseller and nanny while earning two college degrees. She’s studied everything from English to sociology to art, and has figured out that she loves meeting people—particularly the ones she makes up. These days she indulges in her weakness for carpentry and all things retro, and dives into a new love story every day as a writer, freelance editor and RWA member—all while pursuing her wish to become a horseback-riding, volleyball-playing, French-speaking seasoned traveler.
Author Links
website: www.islabennet.com
Twitter: https://twitter.com/IslaBennet
Goodreads: https://www.goodreads.com/author/show/7106441.Isla_Bennet
Pinterest: http://pinterest.com/islabennet/
❤ ❤ ❤ ❤ ❤
Author Giveaway
Isla is giving away a $50.00 gift card to Amazon or Barnes & Noble. To enter, fill out the Rafflecopter form below.
a Rafflecopter giveaway
Posted by CrystalBee at 3:00 AM