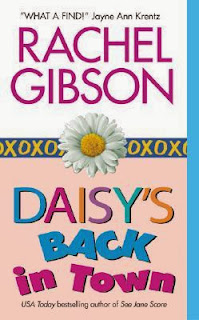 "I wanted people to watch. I wanted people to see us together. I wanted people to see us kissing today. I want everyone to know that you're mine.”  - Jackson Parrish
Daisy's Back in Town
Author: Rachel Gibson
Published: January 2004
Publisher: Avon Books
Purchase Links: Amazon - Barnes & Noble
Daisy Lee Monroe thought she'd brushed the dust of Lovett, Texas, off her high-heeled shoes years ago, but she's come back home only to find that little has changed. Her sister is still crazy, and her mom still has pink plastic flamingos in her front yard. And Jackson Lamott Parrish, the bad boy she'd left behind, is still so sexy it hurts. She'd like nothing better than to avoid this particular man, but she can't. Daisy has something to say to Jackson, and she's not going anywhere until he listens.
Jackson learned his lesson about Daisy the hard way, and now the only word he's interested in hearing from Daisy's red lips is good-bye. But she's popping up everywhere, and he doesn't believe in coincidence. It seems the only way to keep her quiet is with his mouth, but kissing Daisy had once been his downfall. Is he strong enough to resist her now? Strong enough to watch her walk out of his life again? Is he strong enough to make her stay?
❤ ❤ ❤ ❤ ❤
Not only am I back, but I'm back with one of my favorites. It is still one of my favorites, but I had a harder time warming up to Daisy. She seemed a little too selfish to me. Not only does she keep Jack's son away from him, but knowingly allow another man to be Nathan's father because she didn't think Jack loved her anymore. It didn't matter whether or not he loved her. Jack should have been told about Nathan years before. And to only come back home because her husband (and Jack's former best friend) dies and she's feeling guilty? That's just wrong. BUT (yes, there is a big but), I loved Daisy at the end of the book when she finally starts getting her roots back. She realizes what they did was wrong and I appreciated that about her. Jack? I loved him from the get-go. The rest of the secondary characters rocked. I love Rachel's small town stories!
I loved Daisy's Back in Town. The story is both heartbreaking (Jack mostly) and funny. I loved watching Jack and Nathan grow closer. Their sex talk was freaking hysterical. This may sound a little mean, but I was glad that Jack stood up to Daisy. He made it known how much he was hurt and it helped the both of them to grow from that. Also watching Daisy grow closer with her friends and her own family. Not to mention Jack and Daisy together...hot! Fantastic story! And the cover is absolutely adorable.
❤ ❤ ❤ ❤ ❤
So excited for next week's book - The Trouble with Valentine's Day. I  ❤ Rob. *swoon*
Posted by CrystalBee at 3:00 AM