The Wicked Wallflower by Maya Rodale 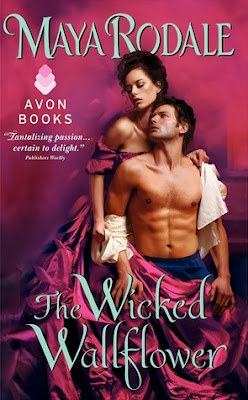 Lady Emma Avery has accidentally announced her engagement—to the most eligible man in England. As soon as it's discovered that Emma has never actually met the infamously attractive Duke of Ashbrooke, she'll no longer be a wallflower; she'll be a laughingstock. And then Ashbrooke does something Emma never expected. He plays along with her charade.

A temporary betrothal to the irreproachable Lady Avery could be just the thing to repair Ashbrooke's tattered reputation. Seducing her is simply a bonus. And then Emma does what he never expected: she refuses his advances. It's unprecedented. Inconceivable. Quite damnably alluring.

London's Least Likely to Misbehave has aroused the curiosity—among other things—of London's most notorious rogue. Now nothing will suffice but to uncover Emma's wanton side and prove there's nothing so satisfying as two perfect strangers…being perfectly scandalous together.

Oh my! Maya Rodale is another author I haven't read before and now I want more. I absolutely adored The Wicked Wallflower. Although there are a couple of off-the-chart scenes between Emma and Blake, I have to say that I loved the more romantic moments than the steamy ones. The relationship between Emma and Blake was so stinking cute. I loved the banter and the teasing between them just as much as I love the sly, innocent looks they give each other when they think the other isn't looking. I loved the scenes where a simple touch was all they needed. I grinned like a fool every time Blake called her Emily just to get a reaction out of her. So cute! The romantic gestures he does for her... I could go on for a very long time. The secondary characters were a riot. I adored Aunt Agatha. She's a feisty old woman with a sarcastic humor that'll rival anyone. I wish I had friends like Olivia and Prudence. I cannot wait for their books. There is another character that I thought should have her own story told. If not in this series, then as a heroine of another. That was Harriet Dawkins. There was just something about her. She's a wallflower just like Emma, Olivia, and Prudence. Emma saw her as a kindred spirit. We only see her in a handful of scenes, but I would love to read her story.

Besides my love of just about every character, there were two other aspects of The Wicked Wallflower that were different and that I really enjoyed. The first was the spilt format between Emma and Blake. I loved it by the end of the book because it shows what each of the characters are doing at the same crucial moment. I liked that. Especially at times when it was necessary to know what each character felt at that moment. I thought it was perfect when Emma is doubting her feelings towards Blake (and his feelings towards her), while Blake is frantically working on a plan to prove his love for her. I felt that just gave the book a whole different dimension. The second aspect of the book I enjoyed was the introductions into each chapter. Oh my god, they were hysterical!

The Wicked Wallflower was such a special book. I enjoyed every moment of it. I'm in trouble... Another author I must add to my "get every past book" list.


❤ ❤ ❤ ❤ ❤
Some of my favorite lines from The Wicked Wallflower...
"Speaking of fire, do you smell smoke? No, maybe not. I must be imagining things. Like your future happiness going up in flames" - Prudence
"He's so ... dreamy." - Olivia
"I would roll over in my grave and haunt you until the ends of the earth. I'm not joking." - Aunt Agatha (when Emma asks her what would happen if she didn't marry Blake)
I have many more highlighted in my Kindle, but I want you to find them and giggle.
❤ ❤ ❤ ❤ ❤
Maya Rodale and Avon Romance are celebrating the release of The Wicked Wallflower with Wallflowers Week! Be sure to visit www.AvonRomance.com to read more about this fabulous book and to enter to win books!﻿
Posted by CrystalBee at 3:00 AM