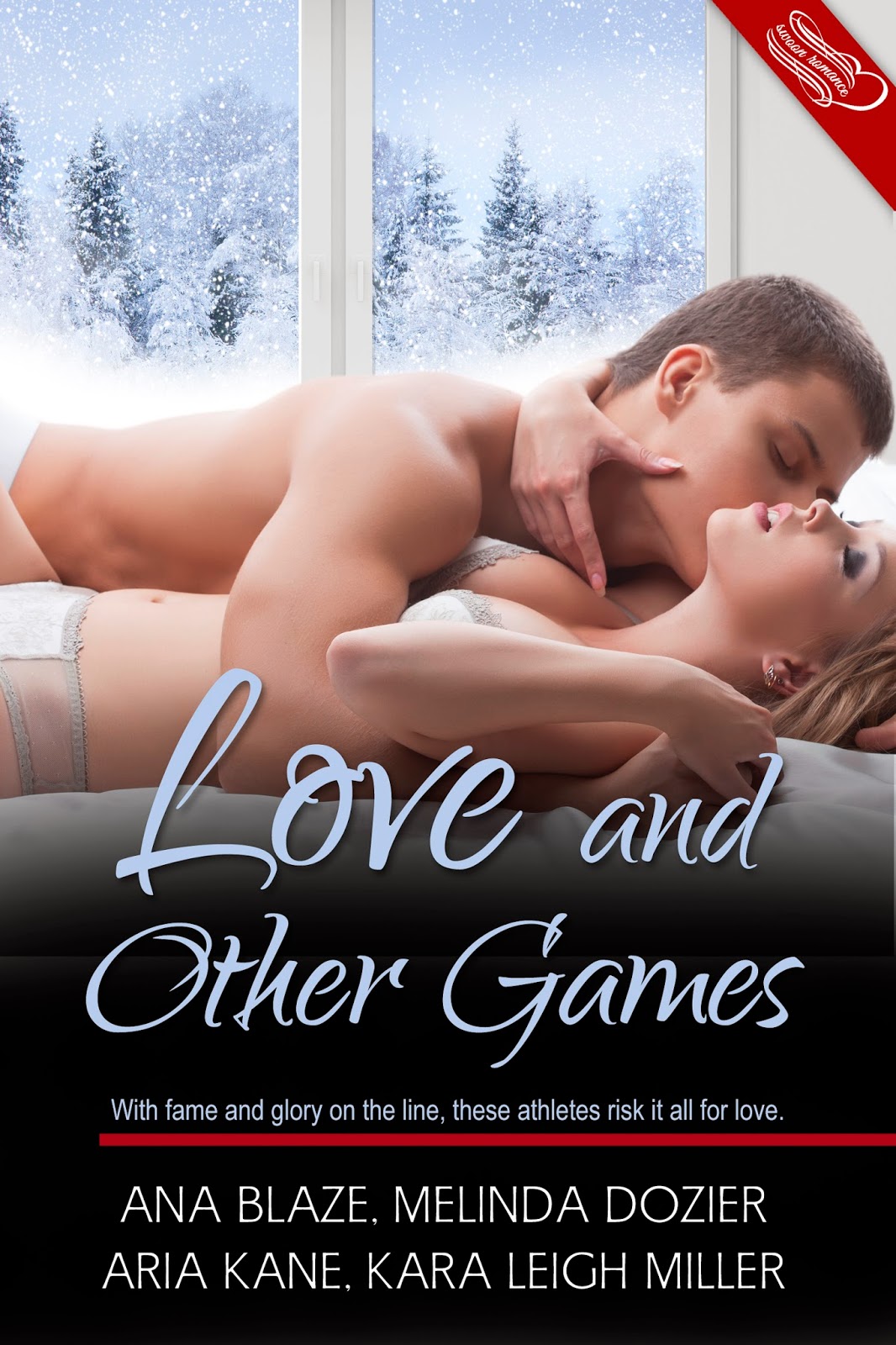 "They must think you're all grannies or something. A vest, a turtleneck and a scarf. How am I supposed to feel you up?" - Ty Madsen (Trouble with Gold)


LOVE AND OTHER GAMES is a collection of four sexy new adult stories centered around athletes competing in the Winter Games by Ana Blaze, Melinda Dozier, Aria Kane, and Kara Leigh Miller.


Worth More Than Gold by Ana Blaze
Amy Pierce, the klutzy sister and manager of America’s Skating Sweetheart, is used to being invisible. But when a friend drags her to a party near the Olympic Village, Amy catches the eye of a sexy Norwegian ski jumper. It’s a magical night, but an awkward next morning has her running.

Everyone knows Erik Andresen’s best shot at an individual medal was back in 2010, before an injury pulled him from the competition. He’s there for his team, but a hot night and a remarkable final training session have him wondering if a gorgeous good-luck charm could give him another chance at the podium.

With a little bit of luck, these two might have a shot at something worth more than gold.

Trouble with Gold by Melinda Dozier
US snowboarder and notorious prankster, Ty (Trouble) Madsen is only getting a taste of his own medicine when his Olympic teammates shackle him to a fence wearing nothing but his boxers.

Reception and protocol volunteer, Nadia Hoffman, gets up close and personal with the sexy snowboarder to rescue him, but she's not the kind of girl who lets her hormones get in her way. A professional performance could help her land her dream job at Olympics Committee Headquarters, but her new assignment supervising the rambunctious US Snowboarding Team is making that difficult. Can she see behind the snowman in the community center bathroom and into the warm heart of the man everyone calls Trouble?

The Girl behind the Gold by Aria Kane
Greek aerial skier Lia Milonas’s parents are about to lose the family farm. Saving it means medaling and landing a huge sponsor. While her no-nonsense attitude has her well on her way to a medal, it hasn’t won her a place in fans' hearts.

“Come back with a story that will make readers cry, or don’t come back.” This is what Brandon James’ boss told him before he left New York to cover the Winter Games for Moment Magazine. With a wink and a smile, he can charm his way into any invite-only party, but that career-making story is nowhere to be found – until he meets Lia.

The two strike a deal that should get them both what they want - but neither would have guessed they’d also find what they need.

Despite Brenna Jessup's abhorrence for the games and the athletes, she's hand-picked as the official photographer for the U.S. Olympic Hockey Team.

When a faux pas by Brenna almost costs Colton his career, she owes him. Too bad for her, Colton doesn't want apologies -- he wants retribution! And he knows just how to get it -- and her -- in the process.

When I was a little girl, I would always pretend that I was an Olympian. I'd do my gymnastics routine on the bathroom tiles. I'd figure skate my way around the living room. It wasn't until I got older did my pretend Olympics turn into dreaming of an Olympic romance. Meeting the guy at the Olympic Village. Getting to know each other between events. Dancing the night away at the closing ceremonies. Too bad I suck at sports...

Love and Other Games is a collection of four gold medal worthy romances all set during the Olympics in Switzerland. The stories are fun, sexy, and quick reads. Each have characters that I couldn't help but love. First, I'm going to share a brief thought I had about each story.

Trouble with Gold - I loved Nadia. She was so adorably clueless. Watching her set out to have fun and end up falling for Ty was just plain cute. As for Ty, I could totally picture him being a big goofball during his off days and crazy-ass snowboarder during competition.

Ice Gold - My favorite story in the book. Hockey players are my downfall! Cole... Cole, Cole, Cole. His best attribute is his cockiness. Just imaging him and a couple of his teammates taking those pictures with Brenna's camera had me in tears. Loved every bit of this story.

The Girl Behind the Gold - This one was a bit different than the other three. My heart broke for Lia. She knows that by winning the Gold medal and landing an endorsement would save her family's farm. Of course this puts a lot of pressure on her. She meets Brandon and he is so sweet to her, helping her loosen up. Such a sweet story.

Worth More than Gold - My second favorite in this book. It was the hottest of the four stories. Holy Hannah! Amy and Erik on the train was sizzling hot!

As a huge fan of sports themed romances, I have to say that there is a lack of books that take place during the Olympics. I, for one, would love to read more of them. That may be one of the main reasons why I loved this book. It was something new in the world of sports romance. The four stories worked extremely well together. I loved that they all take place at the same Olympics. Most of the characters know of each other. I loved that connection. There was also an underlying theme of luck and superstitions, both of which play a big role in sports. Each of the four stories also offer something different. If you love hockey romance, there is one for you. If you love a guy with a toe-curling accent, then you'll love Erik. There is something in this book for everyone. If you want a series of fun sports and Olympic themed romances to read while watching the Olympics next month, then you have to pick up this book. I adored it so much, I ended up buying a finished copy. 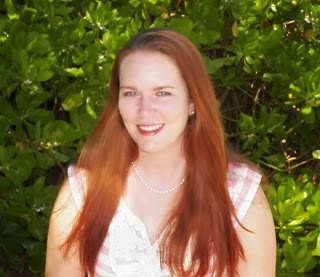 Aria Kane is a recovering mechanical engineer and romance writer. As a military brat, she grew up all over the country, but now lives in sunny Florida with a 60 lb mutt who thinks he's a chihuahua.

Kara Leigh Miller
Born and raised in the small town of Mexico, New York, Kara was an only child who was forced to find ways to entertain herself. Playing make believe with her Barbie dolls and stuffed animals was her first real taste of storytelling before she became old enough to develop a love affair with the written word. 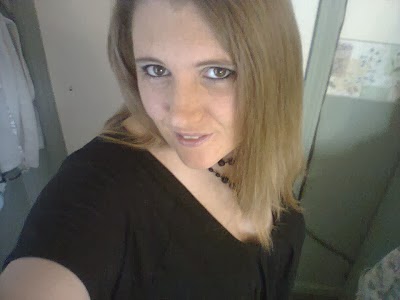 In early 2010, Kara picked up her very first romance novel, and she was instantly hooked. She loves to write contemporary romance, new adult, and young adult romance. Currently she has several full-length novels in the works, a series of novellas, and a handful of short stories. Kara is an active member of the CNY Creative Writers Café and the CNY Romance Writers.

Today, Kara resides in New Haven, New York with her husband, five kids, and three cats. When she's not reading or writing, she's thinking about reading and writing. And when she's not doing that, she's spending time with her family and friends.  Recently, Kara has taken on the position of Managing Editor for the Surge Imprint at Anaiah Press, LLC -- a Christian fiction press. She's working exclusively in the young adult and new adult line. 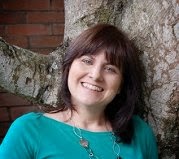 Melinda Dozier lives in Guatemala, Central America, with her husband, three boys and German Shepherd.  She enjoys being the queen of her household and dreams of being pampered fully by her boys once they’re grown. Learn more about her at www.melindadozier.com. 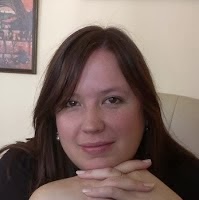 Ana Blaze
Ana lives just outside Washington DC with her very supportive husband and three rather demanding cats. She loves the ocean, Indian food, Ikea, and cooking. Ana admits to watching too much television and she swears that someday she’s going to learn how to play the guitar resting on the bookshelf in her office.

If you wish to continue with the book tour for Love and Other Games, click the banner below.