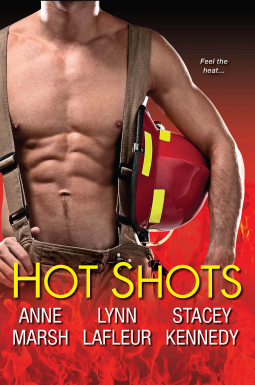 Sexy as sin and hot as hell, these firefighters smolder with passion and burn with desire. . .

"Fired Up" by Anne Marsh

When photojournalist Maysen Halliday arrives in Lanville to take calendar pictures of the sexiest firefighters in Texas, red hot Fire Chief Clay Spencer makes her want him for her own personal centerfold...

Fired Up by Anne Marsh - There is nothing hotter than getting to know a guy over the phone. To hear the rumble in his voice when he speaks, the life in his voice when he laughs, and the hitch in his breath when he comes. Anne Marsh is seriously making me consider a career in the phone sex industry. Holy crap! The way she describes Hannah and Cole's encounters over the radio was smoking hot. They may have never met, but knowing that Hannah is in danger sends Cole into action. All bets were off once they were within arms distance of each other. Anne Marsh's other books have been in my TBR for a little while now and they've been bumped up a few notches. *grin*

Sizzle by Lynn LaFleur - This one was my least favorite of the novellas. I enjoyed the story, but the characters didn't grow on me. I like alpha heroes. They don't have to be overly aggressive when it comes to pursuing the heroine, but I would like him to make a move. I like it when he wants her and acts on it. Clay wanted Maysen, but he refused to act on it. If Maysen hadn't made the first move, I don't think Clay ever would have. I do want to try another of Lynn's books because I enjoyed her writing style. In this one, I just did not have a connection with Clay and Maysen.

Five-Alarm Masquerade by Stacey Kennedy - Yes, please! I loved watching Gavin struggle with his control for Abby. At first, his plan is to sleep with her to get her off his mind and he thought a masked encounter with her was the perfect idea. Suddenly, he wants more. He wants her to know it is him. They have an intense sexual experience and they are open to the possibilities of a relationship. Very hot novella. Yum...