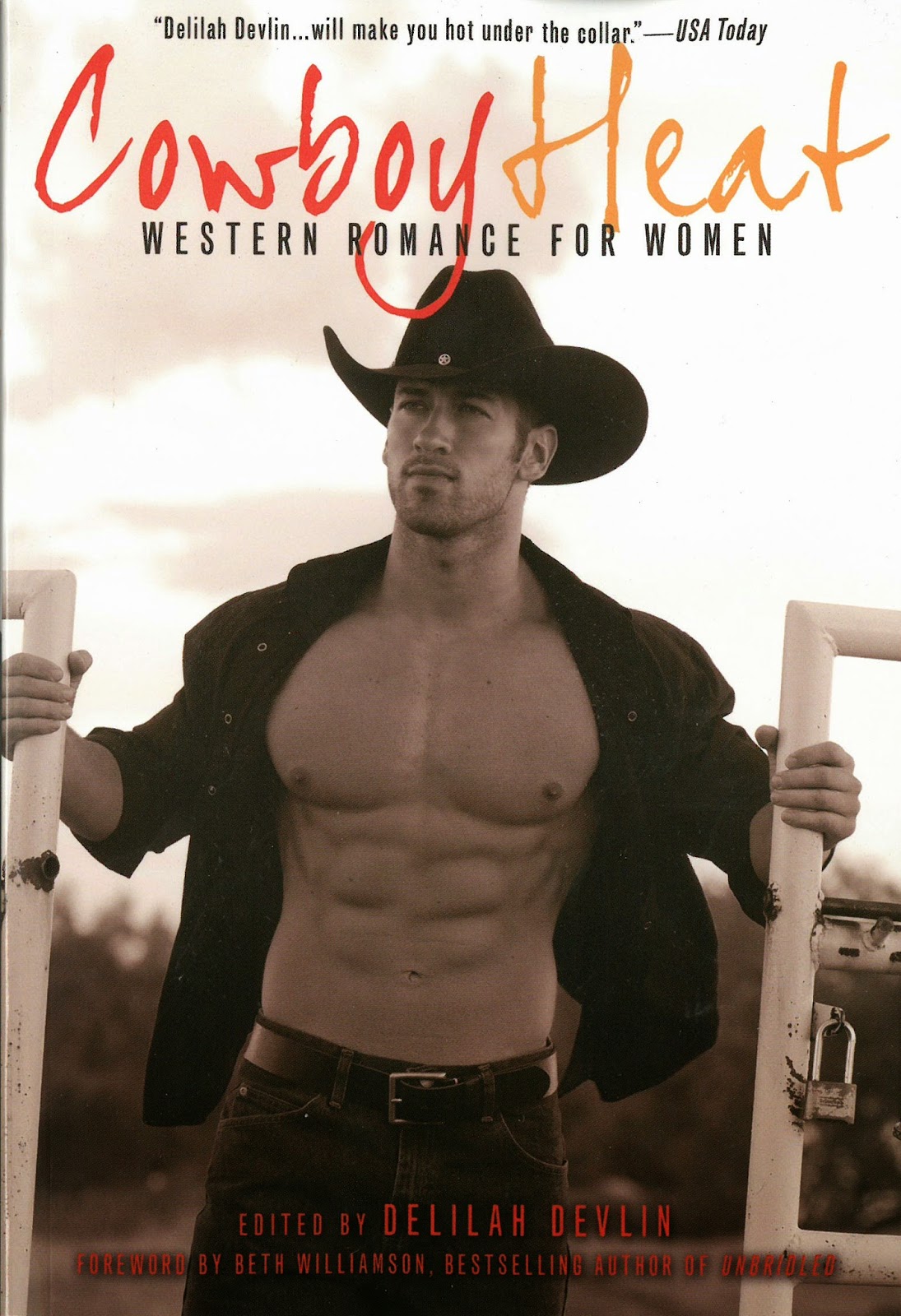 Are you ready for some cowboys?! I know I am! These fifteen fabulous authors give a whole new meaning to "save a horse, ride a cowboy" in this new anthology from Cleis Press - Cowboy Heat.

Grab yourself a cowboy and pick up this book TODAY!

For some extra fun and the chance to win your own copy, don't forget to check out the Facebook Release Day party on March 18, 2014! Click - HERE - to be sent to the party.

And don't forget to check out the Cowboy Heat blog page to find some yummy cowboy goodies!

Is it just me or does the cover model look like Armie Hammer??


The last thing this independent, high-powered lawyer wants is a cowboy in her life, but one steamy kiss from a sexy rancher burns her resolve to a crisp.

What a disaster. Delilah glared at her rental car in helpless frustration. She hated the feeling. She was hardly a frail, fragile woman. She prided herself on the fact that she was self-sufficient and didn’t need anyone. Counting on others was, after all, a recipe for disappointment.

Hard, cold experience had taught her that.

Yet here she was. In the boondocks. In six-inch heels. With a flat tire.

Oh, she could change a fricking tire. Hell, she could rip out and refurbish a transmission. But the idiots at the wilderness rental car company hadn’t bothered to put a jack in the trunk. She was resourceful…but not that resourceful.  Even if she could channel her MacGyveresque tendencies, there was nothing out on this barren plain she could use to lever her car up high enough to do the job.

So here she stood by the side of the road in the middle of nowhere, in six-inch heels and without cell phone service—the epitome of a helpless woman. All she needed was slasher music and she could be the star of a horror flick.

A plume of dust blossomed on the horizon and her mood lifted. Oh, thank god. Someone was coming. No one had passed in the two hours since the blowout.
Hopefully, it wasn’t a slasher.

The plume grew. A beat-up pickup topped one rise, and then the next. The truck rolled to a stop in front of her crippled Honda.

Oh. Lovely. Her savior had a gun rack.

Delilah covered her mouth and nose as the cloud of dust caught up with the truck and engulfed her. Angie’s birthday party had better be worth all this trouble.

She plastered a smile on her face and turned to greet the Good Samaritan. At least, she hoped he was a Good Samaritan. She was quite alone on this deserted stretch of road and—

He unfolded himself from the cab of his truck, and her breath wedged in her throat. He was enormous. And, judging from his ratty chambray shirt, shit-kicker boots and Stetson, he was a cowboy.

He stepped closer through the lingering cloud of dust, and Delilah’s heart ker-chunked. He was gorgeous. Not only was he tall—which she really liked in a man—he was big. Broad and brawny and muscular. His face was a dream from his heavily lashed brown eyes to the intriguing dent on his chin. She had to remind herself why cowboys and city girls didn’t mix, but even that couldn’t keep her from ogling his forearms. His sleeves were rolled up, just enough to give her a glimpse of defined veins and a sprinkling of dark hair. She loved veiny forearms.

“Howdy.” His voice was deep and smoky.

Delilah couldn’t appreciate the sultry timbre. Of all greetings in the universe, Howdy was her least favorite.

“Having some trouble?” He whipped off his Stetson to wipe his brow and thick black curls tumbled out.

Curls. Not fair. Why couldn’t he be bald?

He glanced at her car. A dimple exploded on his cheek.

Dimples were her kryptonite.

“Would you like me to change it for you? You do have a spare?”

Yeah. There it was. Sure he was superhot, gorgeous and sexy as hell. But his patronizing tone squelched any simmering temptation she might have been harboring.

That’s how it was with cowboys, wasn’t it? They saw all women as helpless, idiot creatures stumbling around in six-inch heels, batting their lashes and flashing their boobs and simpering.

Delilah was not a simperer. She was a fuck-you, take-no-prisoners, hard-core lawyer, who could take care of herself just fine.

But she did have a flat. And no jack. She kinda needed his help.

So she batted her lashes. “Um. I think there’s a tire thingy in the…what do you call it? Trunk?” She affected a Southern drawl and thrust out her boobage, just for good measure.

It annoyed her that he bought her act. And it kind of didn’t. The bedazzled look in his eyes was a salve to her ego. After Trevor and all. It was nice to know she could still appeal to a man. Even a redneck cowboy.

He loped over to her car—yes, loped. She tried not to stare at his ass but his jeans were tight. It was a challenge to look elsewhere. He bent to search the trunk—again, a mighty fine ass—and stood, tipping back his Stetson. His profile, against the bird’s-egg-blue backdrop of the sky, stole her breath.

He sighed and headed for his truck, pulling out an impressively fancy jack. “This,” he said, “is a jack. You use it to lift the carriage up high enough to change the tire.”

It was so sweet the way he made his voice all slow and pedantic. You know, so she could understand. Idiot woman that she was.

“Gosh. You’re smart.” She probably didn’t need to gush quite that much, but hell, she hated condescending men. Especially cowboys. But she might as well have fun with this.

He knelt and fitted the jack and started cranking. His muscles bunched, forearms bulging with each pump.

Delilah sighed, and told herself it was only a pretend sigh, but her gaze was riveted to the sight. “You are such a big, strong man.”

He flashed a grin at her.

Yeah. Of course he did. Men loved to be told how big and strong they were. She completely ignored the dimples erupting all over his bristled cheek. Did he never shave? “How can I ever repay you?”

He stilled. The glint in his eye was horrifying. Crap. Had she gone too far with her helpless female shtick? She was all alone. On a deserted highway. With an enormous Neanderthal cowboy.

When he tipped his head to the side, her trepidation vanished. He looked more like a mischievous boy than a mad rapist-slasher. “How about a kiss?”

Her brain fogged over. And it wasn’t horror at the prospect of a strange man demanding a kiss on the side of a deserted road that muddied the waters. It was pure exhilaration at the thought of his mouth devouring hers, those arms wrapping around her, that massive chest, warm and hard as he yanked her close…

Why was she always attracted to the wrong guys? She wanted a man who liked opera and dreamed of traveling to Italy. Not a guy who listened to Country and Western music, spat chew into a bean can, and whose dream of an exciting evening was a night at the local bar playing pool.

“What do you say, ma’am? One kiss, in exchange for my…services?” When she hesitated, he repeated, “A little one.”

Why she nodded, she had no clue.

Well, she knew why she nodded—because she was incapable of speech.

Why she agreed was the mystery.

Then again, he was superhot. She ached to know how he tasted…and it wasn’t as though they would ever see each other again. Besides, if things got out of hand, she had mace. And she knew how to use it.

At her assent, he sprang into action. It was astounding how quickly he changed that tire. He tossed the flat into the trunk, returned his jack to his truck and wiped his hands.

Her heart skittered as he stepped closer.

Email ThisBlogThis!Share to TwitterShare to FacebookShare to Pinterest
Labels: Promo