Hello! Welcome to the first Series Saturday! I was looking over my blog the other day and it dawned on me that I don't just sit and discuss books when I'm not reviewing them. Since I like to talk about books, I thought up a couple semi-weekly themed blog posts that'll be fun between reviews. Let's face it, I am not the fastest reviewer. And that is how "Series Saturday" was born. Each Saturday, I will talk about a series that I'm currently reading, have read, or want to read. Have you read any of these series? Are they also on your TBR?

This week, we are going to start with a series that I just recently added to my TBR... 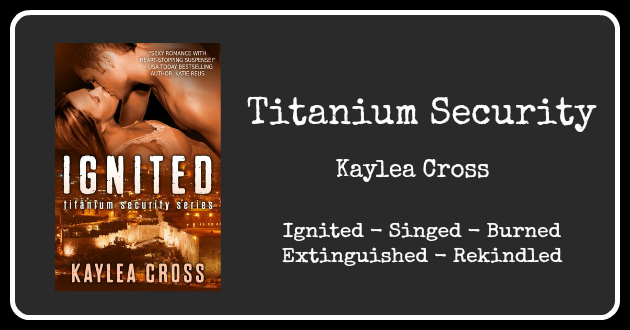 The Titanium Security series consists of five books: Ignited, Singed, Burned, Extinguished, and Rekindled. I have been itching to read a darker romance with a lot of action for a couple weeks now and while I was browsing on Amazon, Ignited popped up into my book suggestions. Read the synopsis and quickly added all five books. Just look at the covers! I love how colorful each of the covers are. Not to mention, they are sizzling hot. No pun intended... Have you read any of the books? If you have, leave a comment below and tell me what you thought about them. If you haven't read them, comment if you'd like to and have added them to your  TBR.

When her father is murdered by a Taliban cell in the tribal regions of Pakistan, Khalia Patterson reluctantly steps into his shoes to carry on the legacy of Fair Start Foundation, a non-profit group dedicated to furthering the education of girls. There she meets Hunter Phillips, the ex-SEAL and head of her Titanium security team, and quickly learns that coming to Pakistan might prove to be a deadly decision.

Battling demons of his own, Hunter grudgingly leads Khalia’s protective detail as a favor to his boss. From their first meeting it’s clear she’s going to be trouble, and that the cell that killed her father is hell bent on taking her out as well. Keeping her alive is one of the toughest assignments he’s ever faced, yet through one harrowing situation after another she continually impresses him with her strength and inner courage. Even though he fights his feelings for her, it’s a losing battle. And when the job is over, he doesn’t know how he’ll let her go.

She walked away from him once…

Struggling to live with her decision to walk away from the only man she ever loved and watching helplessly while her brother succumbs to his battle with severe PTSD, NSA analyst Claire Tierney’s life is at an all time low. The final hit comes when she accesses classified information at work that might get her fired. Instead, she’s assigned to a joint taskforce charged with hunting down a Taliban assassin planning an attack on American soil, and finally has something productive to focus on. Until she meets the rest of the team and learns she’ll be working with the last person on earth she wants further contact with; her ex. She knows letting him go was the biggest mistake of her life, but just when she thinks things can’t get any worse, new intel points to the assassin’s intended target. Her.

This time he’s not letting her go…

As a former Special Forces Master Sergeant and second-in-command of his Titanium Security team, Gage Wallace can handle anything, except being forced to go through life without Claire. When she abruptly walked out on him six months ago, his whole world caved in. It’s clear she’s still determined to keep her distance, but when she’s named a possible target of the very cell they’re trying to dismantle, Gage will stop at nothing to ensure she’s safe. When tragedy destroys Claire’s defenses and the explosive desire between them ignites once more, this time he’s not letting her go. Too late they discover that the danger confronting them is far greater than anyone ever realized, and it’s a race against time to stop a terrorist from unleashing hell on them all.

A woman with a dark past...

Forced into hiding after her NSA-sanctioned task force lands on a terrorist cell’s hit list, cryptologist Zahra Gill must rely on the skill and experience of her ex-Special Ops Titanium Security teammates to keep her safe—including former Force Recon Marine Sean Dunphy. The impossibly sexy man has the unnerving ability to shatter her concentration by simply walking into the same room. Even though she’s sworn to keep him at a distance, his charm and protectiveness weaken her resistance. Drawn to his strength and magnetic sensuality, she finally gives in to the passion she’s denied herself for so long...even though she knows she might lose her heart in the process.

The man strong enough to win her trust...

Sean’s had his eye on the guarded, proud analyst from the first day they met. He knows she’s hiding something from him, but nothing could have prepared him for the shocking truth of her past. When a targeted attack brutally exposes Zahra’s dark secrets, Sean will do everything in his power to protect the woman he’s fallen for. Unfortunately the cell hunting them has powerful connections and their enemy is closer than they ever imagined.

For years former Marine Jordyn Bridger has been in love with a man who refused to see her as anything but his best friend’s little sister. A mind-blowing kiss finally changed that, but then he disappeared from her life. Now he’s back, to recruit her for a job with his NSA-sanctioned Titanium Security team. They’re going after the terrorist responsible for the recent attacks on their team and Jordyn is eager to lend her skill set to the hunt. She’s determined to prove to Blake that she’s capable of holding her own—both in the bedroom and on the battlefield.

Former Marine Scout/Sniper Blake Ellis hid his true feelings for Jordyn for years out of respect for her and her family, but once he learns those feelings aren’t one-sided, he can’t keep his distance any longer. When a team tragedy thrusts Jordyn into the front line with him on a battlefield, Blake will do whatever it takes to protect her. She’s everything he ever wanted in a woman but he was too stubborn to see it. Now it might be too late for them. As they race to capture the terrorist they’re hunting, Blake and Jordyn find themselves fighting for their lives. If they want to make it out alive they must work together to defeat an unseen, powerful network that will stop at nothing until their entire team is dead.

He left her when she needed him most...

Four years ago, Dr. Grace Fallon lost everything that mattered in a terrorist attack she barely survived. Now she’s stronger than ever and in Pakistan with a UN-sanctioned team for the most important assignment of her career. She’s dedicated her life to eradicating the world of chemical weapons, and long ago accepted the inherent risks associated with her job. Until the man whose memory has haunted her for so long suddenly reappears and inadvertently makes her the target of one of the most dangerous terrorists on the planet. Forced to accept Alex’s protection, it’s impossible to deny the white-hot attraction still burning between them. And while she trusts him to guard her from this new threat, Grace must once again decide whether to risk her heart to the man who once shattered her entire world.

Now he’ll risk everything to win her back...

Four years ago, NSA agent Alex Rycroft left Grace because had no choice. But never again. Malik Hassani has escaped custody, he’s on the run, and has locked onto Grace as a means to target Alex. This time Alex will do whatever it takes to protect her—and convince her to give them another chance. Walking away from her nearly destroyed him and now that she’s back in his life, he can’t let her go. When the unthinkable happens and Grace’s life hangs in the balance, he’ll sacrifice everything to save her—including himself.
Posted by CrystalBee at 5:00 AM

Email ThisBlogThis!Share to TwitterShare to FacebookShare to Pinterest
Labels: series