Cover Reveal - Burn for Me (Hidden Legacy #1) by Ilona Andrews 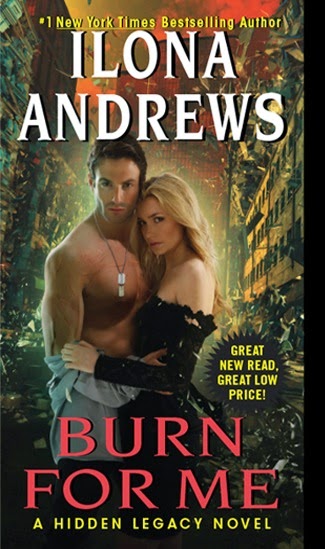 Check it out! A hot new series from Ilona Andrews!

#1 New York Times bestselling author Ilona Andrews launches a brand new Hidden Legacy series, in which one woman must place her trust in a seductive, dangerous man who sets off an even more dangerous desire…

Nevada Baylor is faced with the most challenging case of her detective career-a suicide mission to bring in a suspect in a volatile case. Nevada isn’t sure she has the chops. Her quarry is a Prime, the highest rank of magic user, who can set anyone and anything on fire.

Then she’s kidnapped by Connor “Mad” Rogan-a darkly tempting billionaire with equally devastating powers. Torn between wanting to run or surrender to their overwhelming attraction, Nevada must join forces with Rogan to stay alive.

Rogan’s after the same target, so he needs Nevada. But she’s getting under his skin, making him care about someone other than himself for a change. And, as Rogan has learned, love can be as perilous as death, especially in the magic world.

It is such a gorgeous, distinctive cover, melding together unique paranormal aspect of the world and the sizzle of the relationship between Mad Rogan and Nevada. It's rare when the cover captures a scene from the book exactly the way the author had imagined it. You learn to resign yourself to it. Covers aren't meant to be a literal representation of the narrative, but BURN FOR ME is.  It actually shows a pivotal scene, especially when combined with the aerial view splashback.  If you read the book, you'll know exactly what I mean. When I got the cover file, I sent it to a friend.  She emailed back in minutes.  The email said, "Who did you sacrifice to Cover Gods to get this?"
—Ilona Andrews on her reaction to the cover for BURN FOR ME

BURN FOR ME is a slight departure from Ilona Andrews’ other bestselling urban fantasy series. There’s still the trademark snappy dialogue/narrative and action-packed scenes, but there’s a stronger romance thread here that we wanted to get across right away with this cover.  Our hero Rogan is not just hot and sexy, but he’s powerful.  Like kill-you-with-a-stare powerful.  And Nevada is just as strong, only she doesn’t realize her full potential yet.  So I wanted to show off our couple, have that intimacy between them and not lose any kickass-ness (I know, not a real word, sorry).  The background with the exploding buildings around them…the idea was Ilona’s and the execution is just exquisite.
—Erika Tsang, Ilona’s Editor extraordinaire

Ilona Andrews is the pseudonym for a husband-and-wife writing team. Ilona is a native-born Russian and Gordon is a former communications sergeant in the U.S. Army. Contrary to popular belief, Gordon was never an intelligence officer with a license to kill, and Ilona was never the mysterious Russian spy who seduced him. They met in college, in English Composition 101, where Ilona got a better grade. (Gordon is still sore about that.)


Gordon and Ilona currently reside in Texas with their two children, and many dogs and cats. They have co-authored two series, the bestselling urban fantasy of Kate Daniels and romantic urban fantasy of The Edge.
Posted by CrystalBee at 12:16 PM