Moonlight on My Mind by Jennifer McQuiston - Book Tour! 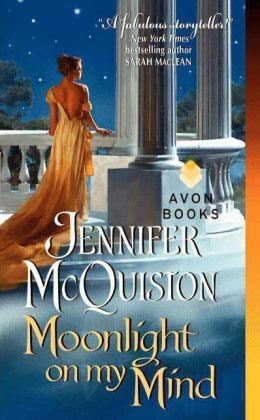 To ruin a man’s life once takes a regrettable mistake.

To do so twice takes a woman like Julianne Baxter. Eleven months ago, Julianne’s statement to the authorities wrongly implicated Patrick, the new Earl of Haversham, in his older brother’s death. The chit is as much trouble as her red hair suggests, and just as captivating. Now she has impetuously tracked him to the wilds of Scotland, insisting that he return home to face a murder charge and save his family from ruin. A clandestine wedding may be the only way to save her reputation—and his neck from the hangman’s noose.

Julianne has no objection to the match. More and more she’s convinced of Patrick’s innocence, though when it comes to igniting her passions, the man is all too guilty. And if they can only clear his name, a marriage made in haste could bring about the most extraordinary pleasure…

Jennifer McQuiston does it again... When it comes to snark and sassy historical romance, Jennifer rocks! And yes, that is a good thing. I loved What Happens in Scotland. I freaking adored Summer is for Lovers. And when the opportunity to read Jennifer's newest book came up, of course I jumped on it. It should come as no shock that I also loved Moonlight on My Mind. Patrick and Julianne... Where do I begin? I loved Patrick. To be accused of his own brother's murder and to have to flee from his family the way he did would break down anyone's character. The fact that he takes in orphaned lambs and wounded dogs just made me fall in love with him from the moment he was introduced. Definitely 100% swoon-worthy. He doesn't quite know what to do with Julianne, though. He feels the attraction, but she told the law and, well, everyone that she saw him kill his brother. That alone should make him run as fast as he can from her, but he doesn't. Instead, he places his faith and his future in her hands, hoping that she'll help him clear his name. Julianne, on the other hand, was not my favorite character in Summer is for Lovers. Honestly, she's an infuriating nut-job. One minute she is a hard-ass, take no prisoners kind of gal. And in the next minute, she is right back to being a snob and looking down her nose at people. And you know what... I liked that about her. She's honest and could really care less about what people think about her. As the book progressed, Patrick starts to break down the walls around Julianne and we get to know more about her right along with him. I adored them together. Watching her stand up to Patrick's family when they were ready to spread rumors about him and spoke unkindly about their marriage. That was the moment when she won me over. I loved all of the scenes between the two of them, but the absolute best scene in the entire book was Patrick realizing that Julianne had taken over his bedroom at his family home. I wish I could have seen his face as he opens the wardrobe only to find her dresses. Priceless...

I adore Jennifer's writing style. The mixture of snark, sass, and romance is perfection. Toss that with a lot of giggle-worthy moments and you have another perfect McQuiston creation. Her characters are real. They have cringe-worthy moments where I would love to throttle them. And Julianne has a lot of these moments... They are not perfect and I like that about them. I am so glad that I found Jennifer at the beginning of her career. I'm new to the genre and I know that now I will always pick up her new books and I look forward to continuing my McQuiston paperback collection (although I still need to pick up What Happens in Scotland).

...now where is Penelope's story? *grin*

Oh! And congratulations for having "New York Times Bestseller" on the cover. You deserved it!

A veterinarian and infectious disease researcher by training, Jennifer McQuiston has always preferred reading romance to scientific textbooks. She resides in Atlanta, Georgia with her husband, their two girls, and an odd assortment of pets, including the pony she promised her children if mommy ever got a book deal. Jennifer can be reached via her website at www.jenmcquiston.com or followed on Twitter @jenmcqwrites.

Click on the banner to continue with the book tour.