Falling for Owen (The McBrides #2) by Jennifer Ryan - Book Tour! 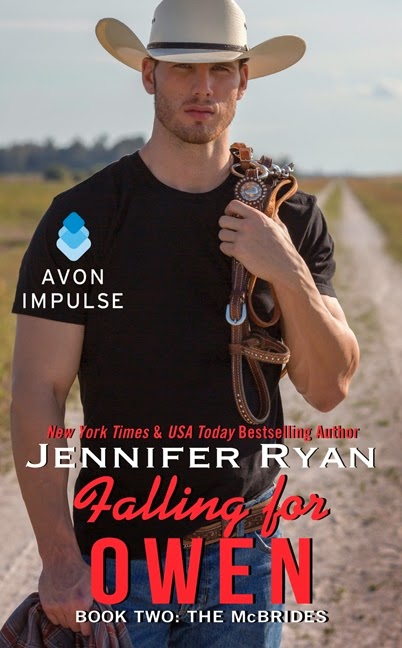 "I'd been thinking of leaving for a few months. I wanted kids and judging by the age of the girl who showed up at my house demanding I give my husband the divorce he told her he wanted, so did he." - Claire Walsh

Falling for Owen
The McBrides #2

The McBrides of Fallbrook return with reformed bad boy Owen. He'll do whatever he must to protect the woman who's captured his heart. Attorney by day, rancher by night Owen McBride conquered his dark past and made it his mission to help the innocent—even at the expense of a personal life. But when a client's abusive ex-husband targets Owen and his gorgeous neighbor Claire gets caught in the crossfire, his feelings turn anything but professional. The mysterious beauty awakens something in him, and he'll move heaven and earth to keep her safe.

Coffee shop owner Claire Walsh learned the hard way that handsome men aren't to be trusted. Owen may be sexy as hell and determined to take care of her, but she's reluctant to put her heart on the line. His presence in her life puts a target on her back, yet the more time she spends with him, the more she finds she can't help falling for Owen.

Confession time... I have yet to read Jennifer's Hunted series and, honestly, I don't know what the hell I'm waiting for.

Jennifer Ryan's Falling for Owen is a surprisingly sweet romance mixed with a side of mystery. We meet (and fall in love with) Owen McBride in the first book in the McBrides series. He's used to taking care of people. He stepped in to take care of Raine and her two daughters when his brother was away. And when Claire's life is in danger, partially because of him, Owen doesn't hesitate. He is immediately drawn to her and will not stop until she is safe. He is such a kind, loving character. Claire Walsh is a strong, independent woman that is struggling a little thanks to the debt her ass of an ex-husband left her with. Much like Owen, she is also a very kind character. I loved Owen and Claire together. Each character has so many facets in them, yet they are very similar in the fact that they'll put the needs of others before their own. It doesn't take long for them to act upon their mutual attraction and it was so sweet watching them get closer. Things do move quickly for them, but that has a lot to do with what is going on around them. Someone is out to hurt Claire and Owen is afraid to lose her. I loved how fast the McBrides welcome new members to their growing family. Brody adopting Owen's sign of affection by kissing Claire's head was adorable. For a family that has so much hurt in the past, they deserve all the happiness in their future.

I am quickly becoming a big fan of Jennifer Ryan. The connection her characters have with each other is incredibly strong and runs deep. I loved how smoothly time passes in Falling for Owen. There is one good sized gap in the timeline that, I thought, perfectly showed how much time had passed in Owen and Claire's relationship. Since everything moves pretty quickly, it did a fantastic job showing that they were able to spend a considerable amount of time working on their relationship. Well, considerable amount of time for a romance book. I enjoyed everything about this book and I cannot wait for both Brody and Owen kiss the head of Dylan's love interest in the next book. *grin*

Jennifer lives in the San Francisco Bay Area with her husband and three children. When she isn’t writing a book, she’s reading one. Her obsession with both is often revealed in the state of her home, and how late dinner is to the table. When she finally leaves those fictional worlds, you’ll find her in the garden, playing in the dirt and daydreaming about people who live only in her head, until she puts them on paper.  Please visit her website at www.jennifer-ryan.com for information about upcoming releases.

Click on the banner to check out the other blogs on the tour.
Posted by CrystalBee at 2:30 AM