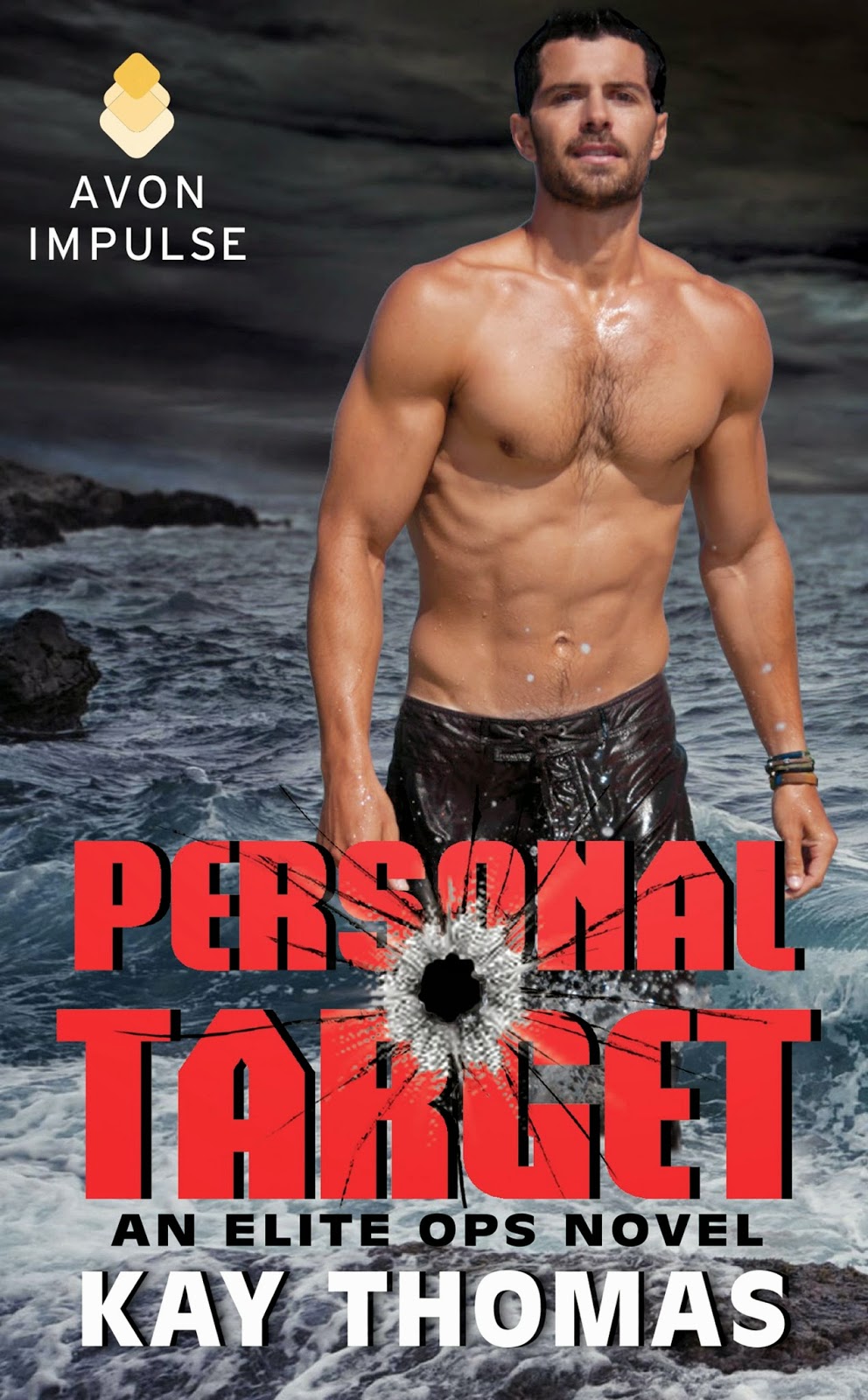 Holy mama! I've yet to read the first book in Kay Thomas's Elite Ops series, but I will for sure pick it up in time for the release of Personal Target.

AEGIS: an elite team of ex-military men working under the radar of most governments.

If you have a problem no one else can handle, they can help. A former SEAL and Black Ops specialist who left the CIA, Nick Donovan gave up a life on the edge to work in the private sector. But that didn't stop his enemies from coming after him—or his family. In a case of mistaken identity, a drug cartel kidnaps his sister-in-law's best friend … a woman from Nick's past.

One minute Jennifer Grayson is housesitting and the next she's abducted to a foreign brothel. Jennifer is planning her escape when her first "customer" arrives. Nick, the man who broke her heart years ago, has come to her rescue. Now, as they race for their lives, passion for each other reignites and old secrets resurface. Can Nick keep the woman he loves safe against an enemy with a personal vendetta?

Award-winning author Kay Thomas didn’t grow up burning to be a writer. As a child she wasn’t even much of a reader until fourth grade. That’s when she was stuck at home with the flu, and her big sister read THE BLACK STALLION aloud to her. For hours Kay was enthralled—shipwrecked in a foreign land and riding an untamed horse across the hot desert sand. Then tragedy struck. Her sister lost her voice. (Kay claims she caught her flu.) But Kay couldn’t wait to hear what happened to Alec Ramsey—so she picked up that book, finished reading it herself, and went in search of more adventures at the local library. Today Kay lives in Dallas with her husband, their two children, and a shockingly-spoiled Boston terrier.

In addition to their US releases—her national best-selling "bulletproof" novels have been published in France, the Netherlands, Estonia, Australia, the UK and South Africa. BULLETPROOF HEARTS (April 2011) won the 2012 HOLT Medallion in Short Contemporary and was a finalist in the National Readers' Choice Awards. Her debut novel—BETTER THAN BULLETPROOF (January 2009)—was a 2010 HOLT Medallion Award of Merit recipient, a Readers’ Crown finalist, and a Romantic Times Reviewer’s Choice nominee.

In November 2013, HARD TARGET: Elite Ops-Book 1 was published in her new series from Avon Impulse. Elite Ops will be a three-book romantic suspense series featuring sexy ex-military men…and the women who rescue their hearts. Look for PERSONAL TARGET in July 2014. For excerpts, book trailers, and more—visit her website at www.KayThomas.net.