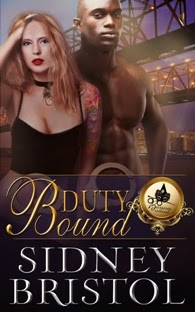 Welcome to my stop on the Duty Bound tour with Sidney Bristol and BippityBoppityBooks. Please be sure to check out the other tour stops, where you can read stop-exclusive excerpts and some reviews!

She’s the woman he sent away.

Lisette wouldn’t be back in New Orleans if she didn’t need protection—and who better to turn to than her ex-boyfriend turned Detective? She’s got a closet full of secrets that include a stalker ex and a kinky past. She vows to not dream about Mathieu…much. If only he were a Dominant, one who would not just flog her into bliss, but love her as well. A girl can dream, can’t she?

He was her first love.

Mathieu wants nothing to do with another damsel in distress, but he can’t say no when the little blonde woman walks back into his life with proof her ex is big trouble. He’ll give her a place to sleep, but nothing more. His heart is locked up tight. Except, Lisette uncovers his past in the BDSM world and she’s never backed down from a challenge. He can handle her, can’t he? Lisette and Mathieu embark on a relationship that is strictly about sexual gratification, but evolves into more. When the bodies align, the hearts entwine. Except their rekindled flame is in danger. Lisette’s ex has found his prey, and he’s not afraid of taking a life.

Officer Mathieu Mouton sat at one of the four-top tables along the windows of Café Du Monde and gazed out at the darkening city, a sense of foreboding deep in his gut. The glitz and glitter of New Orleans stared back at him, like a young woman hungry for her beau. If it wasn’t for his sister, Mathieu would have been at home flipping through the channels, scratching his dog, Gator’s head, trying to put another week behind him.

Instead, he checked his phone again.

She needs your help, Mathieu.

He grimaced at the echo of his sister’s words as she’d cornered him in their mamma’s kitchen after the weekly family dinner. Damsels in distress were a dime a dozen in New Orleans and getting entangled in a charity project was not on his to do list. But no one said no to Lola. Not even grandmère. If Lola wasn’t poised to take over the Assistant District Attorney spot opening up in the spring, grandmère would have made Lola a voodoo queen. It ran in their family since grandmère’s grandmère.

The coffee in his cup was cold, the beignet untouched.

If this broad didn’t show up in the next...

The café door opened and a bell chimed. A woman wearing a cherry red coat that covered her from knee to chin stepped in and shook the chill from her body. She carried a backpack that was stuffed until the seams strained.

Mathieu sat forward, propping his elbows on the table as he studied the patron.

She turned, honey blonde hair streaked with golden brown flipping over her shoulder as she surveyed the room. Her eyes snagged on him immediately and he sucked in a deep breath.

“C'est sa couillion.” He was a raving lunatic.

No wonder Lola hadn’t told him the name of the woman he was meeting. She started toward him. Even Mathieu could feel the cosmic pull between their two bodies. It’s what had drawn him to her all those years ago—and was the reason he’d left.

“Lisette Babineaux, haven’t seen you in a minute,” he drawled, rising to shake her hand.

Lisette’s gaze flicked from his hand to his face before she put her small palm against his. Her skin was still soft and her nails were chipped, but painted with a pale pink polish. Despite the good quality of her clothing, it was dirty and worn. That didn’t make sense. The Babineaux family was well off, and their little princess had never wanted for anything. But a lot changed in the years since he’d left her. He wasn’t the same boy he’d been back then.

She’d always been delicate, refined, as if she’d stepped out of a painting of some debutant ball. Too fragile for a man with his dark tastes, but he’d hungered after her regardless. In his inexperience, he’d thought he could be a different man for her, one who didn’t crave bondage with his women. He’d been wrong.

A handful of years hadn’t changed her appearance all that much. Her hair was shorter, her eyes just as green, and the smattering of freckles preserved the air of youth about her, but there was a wariness to her that was new.

“I know. It’s good to see you.” She unbuttoned her coat and draped it over the back of her chair. Under the coat she wore a long-sleeved black shirt and jeans. Nothing too flashy, but it had never been her clothes that drew the attention.

It can never be said that Sidney Bristol has had a ‘normal’ life.  She is a recovering roller derby queen, former missionary, and tattoo addict. She grew up in a motor-home on the US highways (with an occasional jaunt into Canada and Mexico), traveling the rodeo circuit with her parents. Sidney has lived abroad in both Russia and Thailand, working with children and teenagers. She now lives in Texas where she splits her time between a job she loves, writing, reading and belly dancing.