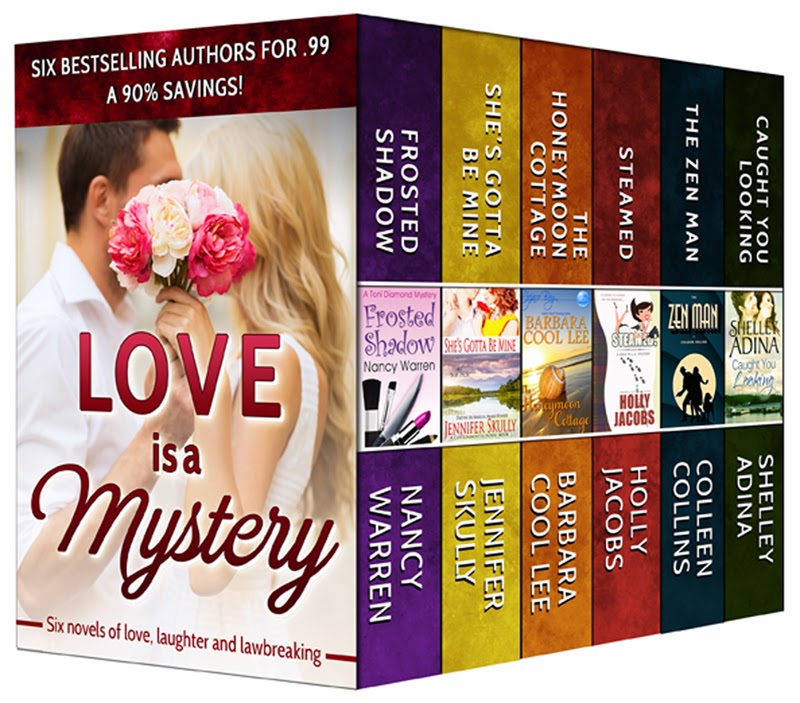 LOVE IS A MYSTERY: SIX NOVELS OF LOVE, LAUGHTER AND LAWBREAKING!

Six bestselling authors' romantic-mystery novels in one boxed set, featuring heroes and heroines who are fearless, funny, and very good at sleuthing out crimes. Available June 1, 2014 for only 99¢ for 90 days—a 90% savings if purchased separately!

There’s nothing pretty about murder. Meet Toni Diamond, make up artist to middle America. She’s also got a nose for trouble and a passion for solving mysteries. Imagine Columbo in a lavender suit. She never met a woman who wouldn’t look better with a little help from the Lady Bianca line of cosmetics. But don’t be fooled by appearances. Underneath the fake diamonds and the big hair is a sharp brain and a keen eye that sees the details as well as the funny side of life. When a Lady Bianca sales rep is murdered at the annual convention in Dallas, Toni is the one who notices things that some people, like sexy Detective Luke Marciano, might easily miss. Only someone who understands as much about how to make appearances deceiving could see into the mind of this killer -- a murderer who wants to give Toni a permanent makeover. Into a dead woman.

SHE’S GOTTA BE MINE by Jennifer Skully (Cottonmouth #1)
Dumped? For her husband’s high school sweetheart he hasn’t seen in twenty years? Roberta Jones Spivey isn’t going to lay down for that. Instead, she reinvents herself and the new Bobbie Jones—new haircut, new name, new attitude—follows her soon-to-be ex to the small Northern California town of Cottonmouth. What better way to show him—and his sweetheart—what he’s missing in the brand new Bobbie Jones than taking up with the town’s local bad boy—who’s also reputed to be a serial killer. Nick Angel is devilishly handsome and sexy as all get-out. In a word, perfect. It’s all going exactly according to plan…until a real murder rocks the little town of Cottonmouth. Of course, Nick didn’t do it…did he?

Camilla Stewart is making a fresh start in Pajaro Bay after her ex-fiancé stole her life savings, embezzled from her job, and then disappeared without a trace--leaving behind nothing but his eight-year-old son, Oliver. But when sheriff's captain Ryan Knight informs her that her ex is not only a con artist but an accused murderer, Camilla realizes she and little Oliver are the only souls on earth who can identify a serial killer... and they are next on his hit list. In this first entry in the Pajaro Bay romance series, readers are welcomed to the charming little

village, with its cast of quirky characters and its funky cottages overlooking the sun-drenched coast. The Pajaro Bay novels have won many awards, including the Romance Writers of America's prestigious Golden Heart Award for Romantic Suspense. You can learn more about the series at author Barbara Cool Lee's website, BarbaraCoolLee.com. While there, find out about the charities receiving part of the profits from the Pajaro Bay books, try out the recipes mentioned in each story, and see what's coming next from Pajaro Bay.

Now she’s a murder suspect with only one option—find the real murderer before she ends up in jail for a crime she didn’t commit.

Quincy came to LA looking for fame and fortune. What she’s found is infamy and misfortune. There’s a killer out there, and Quincy’s going to them…or die trying.

THE ZEN MAN by Colleen Collins

Just as washed-up criminal defense attorney, life-long Deadhead (nickname “The Zen Man”), and current PI Rick Levine decides to get relicensed as a lawyer, he’s charged with killing one and ends up in the slammer with a half-mil bail.

Released on bond, Rick and his girlfriend Laura have 30 days to find the real killer. In the course of their investigations, they dig for dirt among Denver’s shady legal backrooms to its tony corporate centers. Dodging bullets, a kidnapping, trumped-up charges and the FBI's unwanted intervention, Rick and Laura continue tracking key suspects who have motive...eventually learning that true redemption begins at home.

Hot on the trail of a technology thief, private investigator Duncan Moore is convinced that he’s found him in beautiful Moonshell Bay. What he needs is proof. When he goes to ask the neighbor if he can watch from her upstairs bedroom—wow! Sparks fly right off the bat—and now he has two reasons to stay. Mallory isn’t sure she wants a hot, single guy in her house 24/7 ... although her matchmaking family certainly is. They’re ready to throw the engagement party!

Duncan isn’t prepared for how distracting and unique Mallory is. When his surveillance of her—er, his suspect—begins to show signs that Mallory might be involved with her neighbor, Duncan knows he’ll have to get even closer. It isn’t enough that she’s caught him looking—he has to catch his thief, too. But when it all goes down, who is catching who?

Award-winning author Shelley Adina wrote her first teen novel when she was 13. It was rejected by the literary publisher to whom she sent it, but he did say she knew how to tell a story. That was enough to keep her going through the rest of her adolescence, a career, a move to another country, a B.A. in Literature, an M.F.A. in Writing Popular Fiction, and countless manuscript pages. Between books, Shelley loves traveling, playing the piano and Celtic harp, watching movies, and making period costumes. http://www.shelleyadina.com/

Colleen Collins is an award-winning author who’s written several dozen novels for Harlequin and Dorchester, including two indie-published mysteries, The Ungrateful Dead and its sequel, The Zen Man, as well as three nonfiction indie books, Secrets of a Real-Life Female Private Eye, How Do Private Eyes Do That? and How to Write a Dick: A Guide for Writing Fictional Sleuths from a Couple of Real-Life Sleuths (the latter co-authored with Shaun Kaufman). Her books have placed first in the Colorado Gold, Romancing the Rockies, and Top of the Peak contests, and placed in the finals for the Holt Medallion, Best Indie Books 2012, Coeur de Bois Readers Choice, Award of Excellence, More than Magic, and Romance Writers of America RITA contests. After graduating from the University of California Santa Barbara, Colleen worked as a film production assistant, improv comic, telecommunications manager at the RAND Corporation, technical writer/editor, speech writer, and private investigator. All these experiences play into

Holly Jacobs leads a life full of romance and adventure. From skydiving to jet-setting around Europe, from snorkeling in coral reefs to writing while wearing beautiful silk peignoir sets and popping chocolate bonbons, Holly Jacobs leads a life that is the epitome of romance... Well, my fictional life sounds more interesting, but not better than my real life. Really, I'm the happily married mother of four. I cook a lot, garden and weave baskets! I write for Montlake Romance and Harlequin. My books range from lighthearted comedies to more serious dramas...but at heart, they're all stories of love.
http://www.HollyJacobs.com

Barbara Cool Lee is the author of the Pajaro Bay mystery romance series, as well as the Deeds of the Ariane fantasy series. Her books have won many awards, but she thinks the biggest prize is hearing from readers who enjoy her stories. She lives in a cottage by the sea on the California coast, where she's busy writing her next novel. If you would like to be first to find out when Barb's next book is released, join the mailing list at her website at www.BarbaraCoolLee.com.

If you like your romantic suspense fast-paced and laced with humor, try award-winning author Jennifer Skully. Jennifer adores quirky characters. The whackier the better! And you’ll find a whole cast of them in each and every Jennifer Skully book. Of course, being in the same body with alter ego Jasmine Haynes, she doesn’t let you down on the hot, sexy love scenes either. After a long hiatus, Jennifer Skully is back! http://www.skullybuzz.com/

Nancy Warren is the USA Today bestselling author of more than fifty novels. She’s known for writing funny, sexy and suspenseful tales. She calls Vancouver, Canada home though she tends to wander. She’s an avid hiker, animal lover, wine drinker and chocolate fiend. Favorite moments in her career include being featured on the front page of the New York Times when she launched Harlequin’s NASCAR series with Speed Dating. She was also the answer to a crossword puzzle clue in Canada’s National Post newspaper. She’s been a double finalist in the Rita awards and has won the Reviewer’s Choice Award from Romantic Times magazine. She spills secrets in her newsletter and you can sign up at http://www.nancywarren.net.