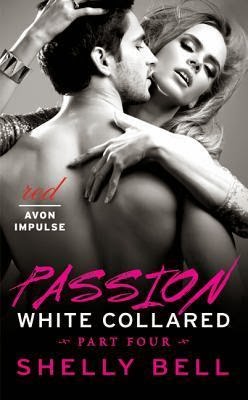 "I wanted Nick to know that however grateful I was to him for saving your life, I'd never let him have you. You belong to me." - Jaxon

In the thrilling conclusion of Shelly Bell's White Collared series, Kate and Jaxon are finally free to put the past behind them, but a shocking betrayal could have deadly consequences that neither saw coming.

With Alyssa's murder solved, Kate attempts to fix the damage to her relationship with Jaxon, but with his reputation and career destroyed by false accusations, Jaxon asks for time to consider their future. Yet as hard as Kate tries, she can't extinguish her desire for Jaxon, or forget the pleasure she's found in submission.

In an attempt to convince Jaxon they truly belong together, Kate allows him to dominate her completely, signifying her trust and proving her love. But just as everything she's ever dreamed of is finally within her grasp, Kate discovers a chilling secret from Alyssa's past that brings her world crashing down … and reveals a murderer hiding in plain sight.

Wow... To say "I did not see that coming" would be the understatement of the week. Holy plot twists, Batman. Not only is there a twist in Hannah's relationship with Kate, but there is a freaking huge twist in Alyssa's murder. I did not see either of them coming. Loved them! Passion brought the whole series to a beautifully haunting conclusion. There was the perfect amount of sexy and suspense. I found it interesting how Shelly turned the tables on Kate and Jaxon. Kate is finally ready to face her past without relying on her pills. She has made amends with Hannah and although their friendship will never be the same, both of them are able to move on. Kate is ready to start her life over. Jaxon, on the other hand, is ready to go into hiding. He can't face those that are judging him and that was something Kate felt after the death of her father. They come full circle and both realize that their future is with each other. I loved it! Passion was the perfect end to this fantastic series.

1. It was inspired by a real Michigan murder.

3. I created the sex club, Benediction, from rumors I’ve heard throughout the years that a similar exclusive club exists in Metro-Detroit.

4. White Collared is a murder mystery. See if you can figure it out!

5. There’s a love triangle between the heroine Kate Martin, her boss Nick Trenton, and her client Jaxon Deveroux. Will you be #TeamJaxon or #TeamNick? I was rooting for both of them. Together.

6. Kate is from the Upper Peninsula of Michigan, and while she’s worked hard to get rid of her accent, in her head (and mine), she sounds a bit like Marge from the movie, Fargo.

8. Everybody in the book has a secret. Just remember that.

9. As I wrote, I pictured Henry Cavill in the role of Jaxon Deveroux. He’s in Metro-Detroit this summer along with Ben Affleck (with whom I share a birthday) shooting Batman vs. Superman. I’m thinking of stalking them.

10. I didn’t write the book and chop it into pieces to bilk readers out of their hard-earned money. Trust me, I’m a reader too, and I love reading serials! I wrote it as a serial to increase the excitement of the reading experience and stimulate both mind and body.

11. I’ve been watching General Hospital and other television serials for more than thirty-five years. This book was born out of my love for cliffhangers. Who remembers the summer when everyone waited for Dallas to return to find out Who Shot J.R? (Let’s not mention the whole Bobby is alive and the previous season was a dream fiasco.)

13. White Collared is releasing weekly which means you won’t forget what happened in the previous installments.

14. It’s a standalone. While I’d love to write more stories for Kate, all the loose ends of White Collared are wrapped up at the end of the book, and she gets her happy ending.

15. The title refers to more than what the murder victim is wearing when she’s found. When you read it, see how many ways the term white collared is used both figuratively and literally.

16. It has a couple of my favorite tropes- forbidden love and older man/younger woman. In White Collared, it applies both to Jaxon and Nick.

17. Kate is the opposite of me. She’s outdoorsy, athletic, and used to love to garden, fish, and hunt. I prefer the indoors except when I’m laying by the pool, and I kill flowers, hate fish, and won’t hunt for anything but a bargain on books.

18. The character Nick Trenton is named after my friend who died our freshman year of college.

20. I’m hosting a forum on my Facebook author page so that readers can post their theories and talk with each other about the installments. I may pop in now and then to give hints and exclusive previews!

1. You love a good mystery. See if you can solve it!

2. Hot guys galore and a love triangle! Who should Kate end up with? #TeamJaxon or #TeamNick?

3. Kate is a Harley riding, gin drinking, self-sufficient young woman who just happens to be submissive in the bedroom and a masochist.

4. The breaks in the books are natural and organic. I didn’t write the book and chop it up into pieces to bilk readers out of more money. Trust me, I’m a reader too! It was written to increase the excitement of the reading experience and stimulate both mind and body. Plus, each part is only $.99 which means its $3.96 total for more than 400 pages.

5. It’s releasing weekly which means you won’t forget what happened in the previous installments.

6. It’s a standalone. While I’d love to write more stories for Kate, all the loose ends are wrapped up at the end of the book and she gets her happy ending.

7. You’re a fan of daytime serials or nighttime serials like Revenge, Dallas, and Scandal. I’ve been watching General Hospital for more than thirty-five years. This book was born out of my love for cliffhangers. Who remembers the summer when everyone waited for Dallas to return and find out Who Shot J.R? (Let’s not mention the whole Bobby is alive and the previous season was a dream fiasco.)

8. You loved or hated Fifty Shades of Grey.

9. If you don’t like Part One, you don’t have to buy the next installment (I promise that won’t be the case!).

10. You don’t want to miss out on the weekly Twitter chats, or your chance to post your theories on the forums, and participate in the contests.

WHITE COLLARED, PART FOUR: PASSION PLAYLIST
Chapter 1. Glitter in the Air by P!nk
Chapter 2. Broken by Seether with Amy Lee
Chapter 3. It’s Been a While by Staind
Chapter 4. Streets of Mexico by Ron Masom
Chapter 5. Monster by Eminem
Chapter 6. Bleeding Out by Imagine Dragons
Chapter 7. Lost In Paradise by Evanescence
Chapter 8. No Surprise by Daughtry
Chapter 9. Say Something by Big World and Christina Aguilera
Chapter 10. Burn it Down by Linkin Park