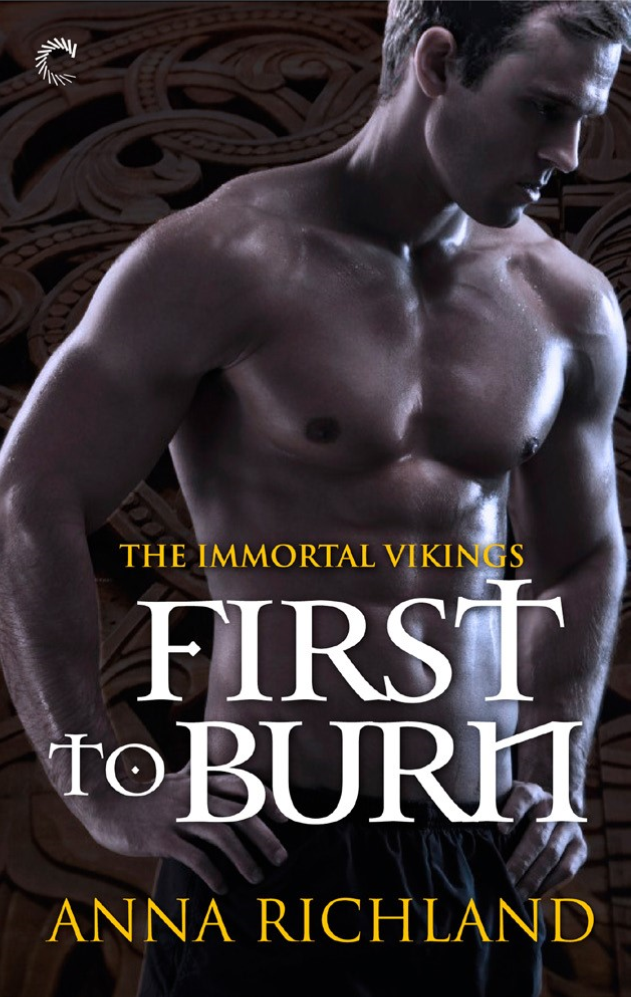 A Soldier with Secrets.
Immortal Viking Wulf Wardsen once battled alongside Beowulf, and now serves in Afghanistan. He's trusted the mortal men on his elite special operations team to protect his secret, until an explosion lands Wulf in a place more dangerous to him than a battlefield: a medevac helicopter.

A Doctor with Questions.
Army captain Theresa Chiesa follows the rules and expects the same from others, even special forces hotshots like Sergeant Wardsen. She's determined to discover the secret behind his supernaturally fast healing, and she won't allow his sexy smile to distract her.

An Enemy with Nothing to Lose.

Even as Theresa's investigation threatens to expose him, Wulf dreams of love and a normal life with her. But the lost Viking relic needed to reverse his immortality is being hunted by another—an ancient enemy who won't hesitate to hurt Theresa to strike back at Wulf.

Glad that her legs had brought her to the table without buckling, Theresa slipped into the seat across from her roommate.

Jennifer looked up from her phone. “What took you so long?”

“You didn’t see?” How could Miss Nosy have missed this? Sergeant Wardsen had stalked her through the chow line in full view of the entire room.

“Text from my sister.” Her friend leaned across the table. “What’d I miss?”

“One of the special ops guys.” For the rest of this deployment, she’d savor the way that phrase froze the other doctor in her chair.

“What?” Jennifer’s eyes bugged as if she needed a Heimlich.

“Sergeant Wardsen, he of the missing papers, wanted to talk.”

“One of those gi-normous mystery men spoke to you? Actual words? Wait—he exists?” She pointed her empty fork at Theresa. “You’re shamming me.”

“Am not.” As she cut into her chicken cordon bleu, a rivulet of melted cheese pooled on the plastic plate, the way she liked it. A damn fine Tuesday. “He stopped me in line to apologize for his commander’s rudeness in the gym. He said, and I’m quoting, ‘I’m sorry. The team’s sorry.’”

Jennifer’s mouth dropped open for a long moment until she put a fork full of pasta in it and chewed. “So, was he cute?” She started to turn in her seat.

“Stop!” Theresa pinned her friend with a glare. Talking about men in the abstract, in the what-will-I-look-for-after-I-leave-the-army way, passed the time. But she drew the line at staring at real men. “Don’t you dare look.”

“Why not? A guy chatted with you. You’re blushing. I want to check him out.”

“It is for me. It is for the army.” They both knew the fraternization rules.

“And you’re a short-timer, so why not? Human catnip, huh?”

“I’m not answering that.” His pants had fit noticeably well, and when he smiled his bottom lip had curved with invitation, but she couldn’t RSVP yes. Men were off-limits out here, and once she was back in civilization, she’d be so close to her final separation date, she wouldn’t have time to think about dating until she was settled in the next stage of her life.

“And he speaks in full sentences?”

“Please, thank you, the works.” Sergeant Wardsen’s eyes had warmed as they talked, as if she’d thawed something inside him. She speared a tomato to stop the flutter in her stomach.

“Skip the melodrama.” She’d never admit that Sergeant Wardsen’s struggle to describe his commander’s problem made her agree, so she ignored her roommate and ate another bite.

“You exchanged what? Three sentences?”

“More like…” Theresa replayed the conversation while she crunched the chicken’s thyme-seasoned crust. “At least a dozen.”

“With that much chitchat I’m surprised you don’t know his Social Security number.”

“I asked if he was—”A crumb stuck in her throat, and she had to gulp water to stop coughing. “Married.”

“I couldn’t possibly have heard that correctly.”

She covered her forehead and eyes with one hand. “You did.”

“No effing way.” Through her fingers, she saw Jennifer’s shirt front droop into leftover red sauce as her friend leaned halfway across the table. “Is he?”

“Nooo.” The single stretched sound might have been an answer to the question or a plea to drop the subject or even good advice to herself. She couldn’t decode her emotions.

Jen whistled without a sound and shook her head. “When you go for it, you don’t mess around. And a sergeant.”

How did her friend know exactly the tone her grandmother had used when good Italian girls dated outside the faith? “That’s why we forget it.” Her gaze drifted to the special ops table where guys were high-fiving each other while Sergeant Wardsen sat with a stiff spine at the end of the row. “He’ll never talk to me again.”

“Oh, I don’t think those dudes give up easily.” Jennifer gulped her cola. “If you won’t let me stare from here then I need a refill.”

“Please be subtle. Please.” That was like asking a surgeon to thank you when you provided a clamp, so she slipped lower in her seat as Jennifer marched to the drink bar.

Anna Richland lives with her quietly funny Canadian husband and two less quiet children in a century-old house in Seattle. Like the heroine of FIRST TO BURN, she joined the army to pay tuition, a decision that led to an adventurous career on four continents (if standing on the bridge in Panama that divides North and South America counts as two).

She donates a portion of her book proceeds to the Fisher House Foundation, which provides housing for families of wounded soldiers in the US and Great Britain, and Doctors Without Borders, which delivers emergency medical care in more than sixty crisis zones world-wide.

To find out about her October novella, HIS ROAD HOME, and the next Immortal Vikings romance, THE SECOND LIE, visit her website at annarichland.com and sign up for her newsletter.