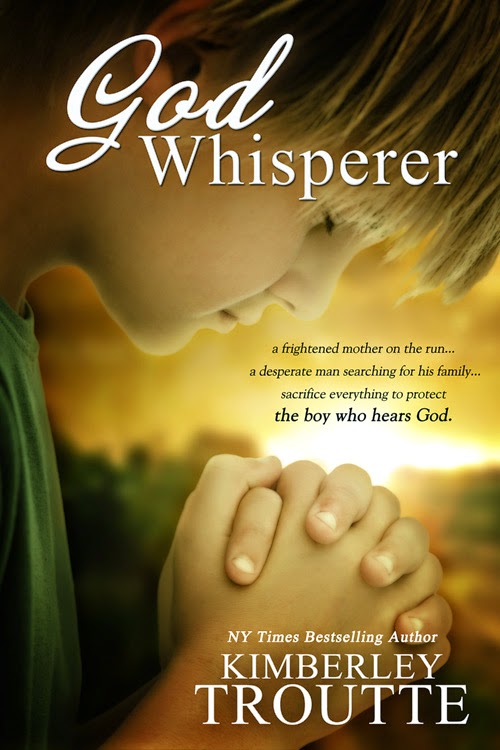 A frightened mother on the run

LONNIE HOGAN has lived and breathed fear for the eight years she and her son have been on the run. She cut ties with the past and is hiding out in a small offbeat Danish community in California. Will the killers find them? She’s ready to run again, or fight for her son’s precious life, but she won’t let anyone take David.

A desperate man searching for his family…

Few people on St. John, Virgin Islands, know their favorite doctor, MARK NORTON, is a desperate man searching for the life that was stolen from him. After hours, he surfs the internet for leads and retraces paths gone stone-cold to find his missing family. He’ll do anything to find them and get his son back.

Will sacrifice everything to protect the boy who hears God…

DAVID HOGAN is a regular kid, if you don’t count the one-ear thing. He didn’t mind being deaf in one ear, but it hurt his mom, way down deep, as if she caused it. Why won’t she see bad things can happen for good reasons? Like the ear surgery that allowed him to hear God. Talking to God is one of the greatest things to ever happen to him, even if Mom doesn’t believe it. But the killers can find them now. Can one little kid save them all?

Lonnie sat down next to him and lifted the plastic ear covering. “All right, time to let that ear breathe.”

Big tears dripped off her cheeks.

She didn’t lie. The outside edge of the ear was still wrapped in a bandage, but my goodness, it was no longer a little nub. He had a new ear complete with an ear canal. It was plugged with tan-colored goo, but there it was—an actual hole.

She released him. “Sorry.”

He looked her in the eyes. “You believe in miracles?”

Lonnie was taken aback. She believed in them a long time ago, but now? “I just meant we were lucky to find Dr. Mason. He was the right guy for the surgery.”

Tucking her feet under her, she sighed. “I used to.”

“You’re right about that.” She rubbed his arm. “Dr. Mason said to take it easy.”

He narrowed his eyes at her. “You’re so stalling. Tell me the story. What made you stop believing in God?”

How could she tell him about the horrors she’d been through? David was eight years old and still believed in Santa. Why wouldn’t he believe in God, angels, and the tooth fairy? She didn’t want to take any of it from him. Not yet. He was growing up so fast.

She chose the simplest explanation. “If there is a God, I don’t understand how He could let bad stuff happen. You know? War, hunger, sickness. Why allow those things? Especially babies born with—” she did not, nor would she ever, say the word deformed, “—with problems? If there is a God, I’m really mad at Him.”

He stared at his knees for a moment as if mulling over her answer. Turning a hopeful face towards her he said, “Maybe God has a plan. Like, um, bad stuff happens for good reasons?”

She ran her fingers through her hair. “I don’t know, kiddo. That’s kind of hard for me to swallow.”
David was silent for a moment and then said, “You’ve swallowed worse haven’t you?”

“What’s that supposed to mean?”

“I have no idea.” He massaged his neck, like his dad used to do. It took her breath away.

“David.” She put a hand on his shoulder. “Why would you say that?”

A strange look passed over his face. It reminded her of the time when he was three and snuck a gallon of ice cream out of the freezer, hid in his closet, and ate it until he was sick.

“No clue.” He tapped his forehead. “Since the surgery, thoughts pop into my head like someone else is in there.”

“What?” Worry flickered up her spine.

She lifted his chin until they were eye-to-eye and studied him. His pupils were normal, his coloring fine.

Except for the giant bandage wrapped around his ear, he looked like a healthy kid.

“You’re tired.” She put the protective covering back on his ear. “Rest, now. We’ll see your regular doctor on Monday to change the bandage and check you out. If he says you can stop taking the pain pills we’ll stop. Maybe the medicines are making your brain fuzzy.”

But his expression said something else. It was the ice-cream-sneaking-guilt-face all over again. He was hiding something from her.

New York Times and USA Today Bestselling Author, Kimberley Troutte, is a top 100 Amazon author for romantic suspense. GOD WHISPERER was inspired by her sweet son who was born with one incomplete ear. When surgeons created an eardrum and canal for him and he could hear with both ears for the first time, Kimberley wept with joy and gratitude.
10% of the author royalties will be donated to the American Society for Deaf Children.