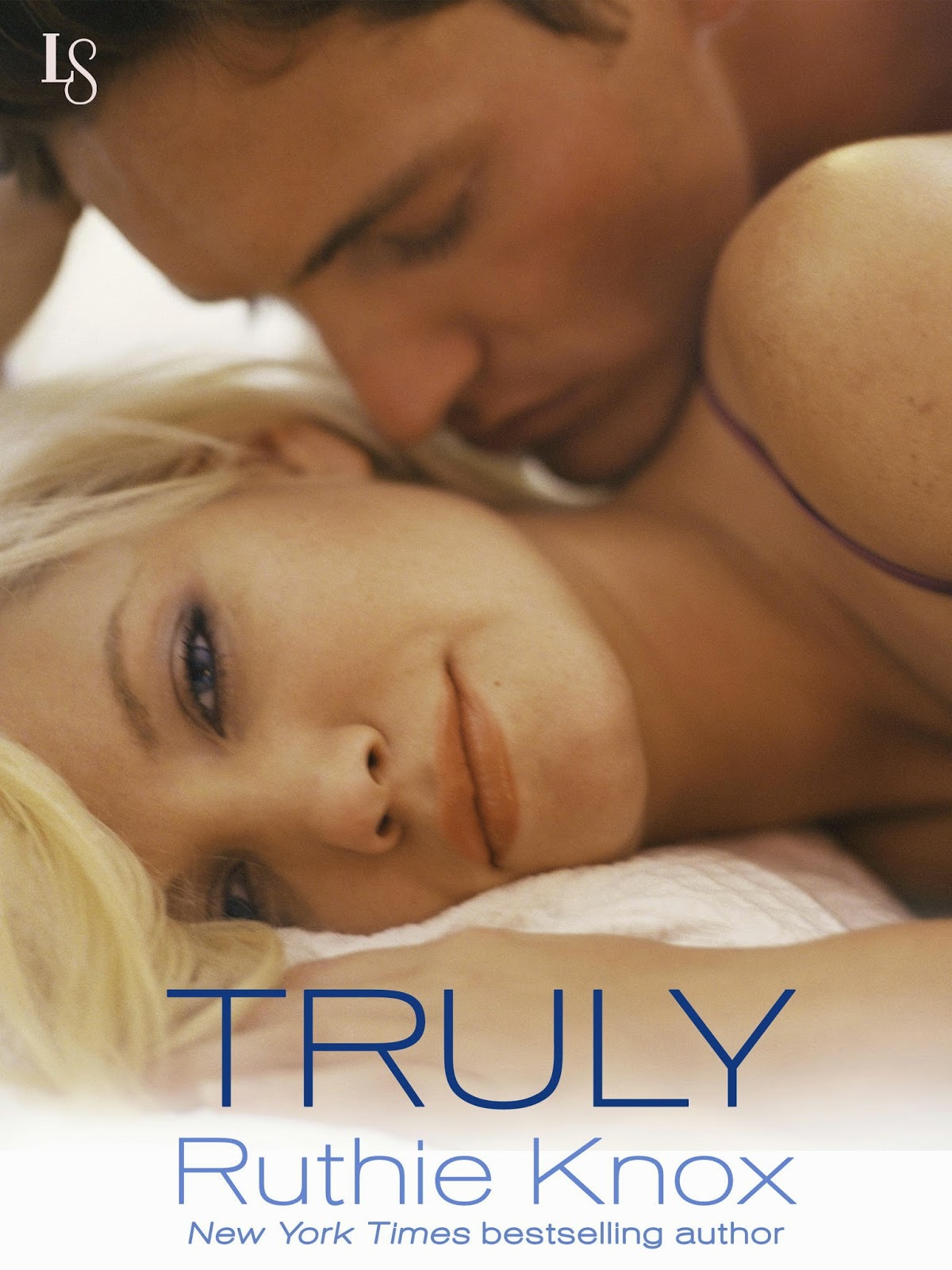 May Fredericks hates New York. Which is fair enough, since New York seems to hate her back. After relocating to Manhattan from the Midwest to be with her long-distance boyfriend, NFL quarterback Thor Einarsson, May receives the world’s worst marriage proposal, stabs the jerk with a shrimp fork, and storms off alone—only to get mugged. Now she’s got no phone, no cash, and no friends. How’s a nice girl supposed to get back to safe, sensible Wisconsin?

Frankly, Ben Hausman couldn’t care less. Sure, it’s not every day he meets a genuine, down-to-earth woman like May—especially in a dive in the Village—but he’s recovering from an ugly divorce that cost him his restaurant. He wants to be left alone to start over and become a better man. Then again, playing the white knight to May’s sexy damsel in distress would be an excellent place to start—if only he can give her one very good reason to love New York.

Truly
from Chapter One
© 2014 Ruthie Knox

How amazing that had been. Ordinary May, being pursued by the Packers’ bad-boy second-string quarterback. Being respected by him. And from the very beginning, she’d kept his head screwed on straight.

Oh, she was an idiot.

A plain, unremarkable sort of idiot, standing on a stage where she didn’t belong, wearing shoes that hurt her feet and loathsome Spanx that left a red line of shame on her belly when she finally peeled herself out of them.

Unsexy. Uninteresting. Steady. That’s what Dan saw when he looked at her. He loved her for being mind-numbingly safe.

It’s been four years since I met May, he’d said. I left all my old ways behind. I quit thinking about sex and started focusing on the one thing that matters to me most.

But he had. He’d told three hundred strangers that the one thing that mattered to him most was—wait for it—football.

And something had happened to her.

The diamond in Dan’s hand flashed under the stage lights, so bright it made her eyes hurt. So bright it set surreptitious shards of fierceness ablaze in her. Her toes had curled inside the sexy shoes she’d bought for this special occasion. Her calves had bunched beneath her silk stockings. Her stomach had tensed below its corset-by-another-name.

She’d felt so bad, it was almost good.

And that moment—those seconds—had drawn a line across her life, dividing it into Before and After.

She didn’t want to remember all the lurid details: the shouts, the camera flashes going off as Dan inspected his injured hand in shock. How placid and far away she’d felt afterward as Dan’s agent rushed them offstage and shuffled them, not to New Jersey, where they actually lived, but to Dan’s Manhattan apartment, where they were instructed to hole up and keep their mouths shut.

She was still angry, but her anger had gone underground and turned into a sort of muffled restlessness. A buried, insistent refusal that made it hard for her to sit still, to do as she was told, to listen to Dan reassuring her that she was being hasty, that it wasn’t over, that everything would work out.

He’d left for a meeting with the team’s PR people, and she’d written him a note, grabbed her purse, and run.

Her plan was to get to Newark Airport, change her ticket, and fly home. But she hadn’t gotten that far, because the lobby had been full of flashbulbs and shouting, and a man dressed like a security guard had grabbed her by the arm, led her to a side entrance of the building, and—just when she was feeling relieved to have escaped—plucked her purse off her shoulder and run.

She’d been left in an alley with five bucks and a MetroCard, and the only logical thing to do was go back to the apartment.

But the before-and-after line she’d drawn had followed her into the alley. She’d sensed that if she turned around she might see it, thick and black and wet, painted across the ground directly behind her heels.

The line said You can’t go back.

She didn’t want to. She didn’t want to talk to Dan. But neither did she want to be sitting here, broke, with no purse and no friends or family within a thousand miles, and no phone to call them with.

New York Times bestselling author Ruthie Knox writes contemporary romance that’s sexy, witty, and angsty—sometimes all three at once. Her debut novel, Ride with Me, is probably the only existing cross-country bicycling love story. She followed it up with About Last Night, a London-based romance whose hero has the unlikely name of Neville, and then Room at the Inn, a Christmas novella—both of which were finalists for the Romance Writers of America’s RITA Award.
Her four-book series about the Clark family of Camelot, Ohio, has won accolades for its fresh, funny portrayal of small-town Midwestern life. Ruthie also writes New Adult romance as Robin York. She moonlights as a mother, Tweets incessantly, and bakes a mean focaccia. She’d love to hear from you, so visit her website and drop her a line.