Review of ONE NIGHT MORE (U.S. Marshals #1) by Mandy Baxter 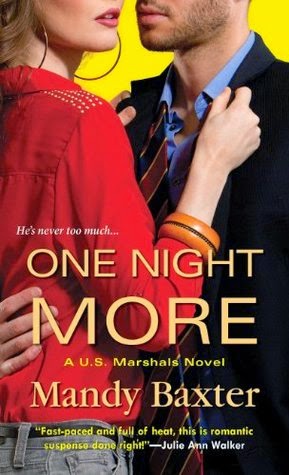 "Oh, dude. When it comes to donuts, all bets are off." - Harper Allen

Savvy, hard-riding, rule-breaking—they’ll go anywhere and do anything it takes to protect and serve. But this U. S. Marshal has just met his match—and playing for keeps is one sizzling game…

Getting saved from disaster by a handsome stranger—Harper Allen has no problem with that. But when he leaves without a word or a clue to his real identity, the newbie reporter writes it off as the best one-night-stand she’ll ever have. Until a year later, when Harper comes face to face with the man assigned to hide her from a senator’s killer…

Galen Kelly hasn’t forgotten a single sensual minute of his night with Harper . . . or that she betrayed him. With the FBI also on their trail, he’s got to pretend he’s never met her or risk both their lives. But as danger closes in, Galen may not be able to protect himself from taking the biggest risk of all…

One Night More was quite possibly the funniest romantic suspense book I've read in a long time. It is a bit heavier on the romance, but the suspense kept me on the edge of my seat. I loved this book. It was funny. It was chalk full of sexual tension between Harper and Galen. And while I figured out who was behind the attacks fairly early, the book still kept me guessing about the motive. Put these three factors together and you've got a fantastic story.

It's him! After an amazing one-night stand, Harper Allen thought she would never see Galen Kelly again. She spent the past year dreaming about him. In that one single night, Galen managed to ruin her for any other man. So when he saunters back into her life, Harper is stunned silent when he doesn't remember her. What?! It's bad enough that she witnessed a murder, how she is being forced into Galen's protection. According to Harper, life just wasn't fair. For Galen, he's forced to lie to his superior. How could he forget the luscious woman sitting before him? He has no choice or he'll be pulled of Harper's protection. As time passes, three things are clear... Harper is bound and determined to scare ten years off his life. Galen is determined to keep her close. And there is someone that really wants her dead.

Oh, my gosh! When I started One Night More, it had been quite a while since I've devoured a romantic suspense book. From start to finish, I read it in one day. I loved everything about this book. Galen Kelly... Galen... One word to describe him? I can't... He's sexy. He's smart. He's all alpha male. With one look, he could have a room full of women wrapped around his ... pinky. What did you think I was going to say? I would seriously lay down and surrender. But alas, he only has eyes for Harper. It kills him that he has to lie about remembering her. Their one night together will forever be burned into his memory and after their year apart, he is still just as drawn to her as he was in the bar. Harper Allen cracked me up. I adored her. She feels the need to prove herself and finish the story that nearly got her killed in the first place. Unfortunately, the murderer is still after her and by the end of the book, she probably scared 20 years off Galen's life. Galen and Harper were amazing together. Their sexual chemistry was sizzling. The banter between them was hysterical. I'm a sucker for banter and I have to say that these two were rocking it. There were times when it turned quickly into foreplay... Especially a certain "discussion" about the TV show Supernatural. That is all I'm saying...

One Night More was my first Mandy Baxter book and it will definitely not be my last. It was a super quick and an extremely fun book to read. It was fast paced, but the characters still had time to grow and come to life. We don't just get to know Harper and Galen. We also briefly meet Landon, a colleague and Galen's friend. I fell for him in this book as well and I can't wait to see what Mandy has in store for him next. One Night More is definitely a book I want to buy in paperback so I can forever have it in my library.

Mandy Baxter lives in rural Idaho. She’s a part-time pet wrangler, a full-time sun worshiper, and only goes out into the cold when coerced. She loves black clothes, pink appliances and thinks junk food should be a recognized food group. In the summer, she can be found sitting by the lake, enjoying the view from her dock.