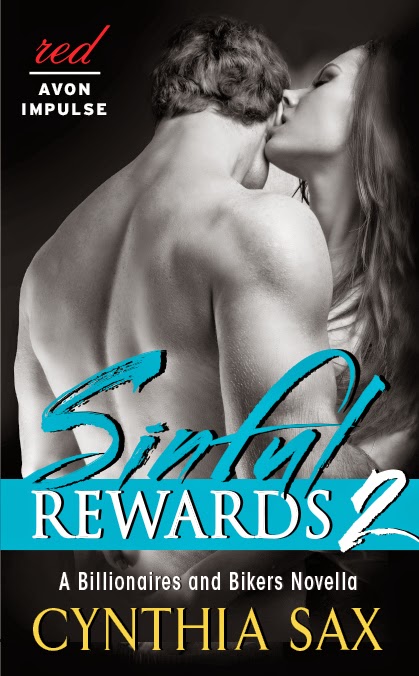 "If he makes you cry, I really will have to kill him." - Hawke

As the stakes are raised again, will Bee succumb to the sensual allure of this latest dare?

Holy Hannah! For such a short novella, it sure has done a number on my nervous system. I smiled the moment it appeared on my Kindle. I sighed and melted while I read it. And then I sat in sadness when I remembered that it is only the 2nd novella in a series of 12 and I have to wait a month for the next installment. Cynthia... That's just plain mean. *grin*

Sinful Rewards 2 starts off as Belinda is in stunned silence as she is staring at the gift her secret admirer sent. Who sent it? Well, we don't know. There are some signs that point to Nicolas... There are signs that point to Hawke. Belinda's head hopes it was Nicolas, but the rest of her body longs for it to be from Hawke. Either way, she is going to have one hell of a fun time trying to figure out who her mystery texter is.

I am dying know who Belinda picks! I love this series.. The character of Belinda is very intriguing. On one hand, she's torn between two hot men and wants to explore her sexuality. At the same, she's also the good girl that wants a stable relationship with a man that'll stick around. As for Hawke and Nicolas, I am team Hawke. He is more interested in knowing Belinda. His conversations with her are about how her day was. Meanwhile, the time she spends with Nicolas, their conversations always seem to be about him. I don't think Belinda has caught on to this yet, but I hope she does soon. :) I thought this was a fantastic follow up to the first novella. Although none of the characters have had sex yet, it is still sizzling hot. Not to mention, Cynthia keeps the reader guessing while the love triangle gets hotter. And now the wait begins for part 3...

Is it September yet?

“You like my bike, huh?” Hawke grins, one corner of his lips quirking endearingly higher than the other. The stubble shadowing his square chin accentuates his broad cheekbones, the darkness contrasting vividly with his pale eyes.

“Yep.” I don’t like what his bike symbolizes, his chosen means of transport is built for one person, but I admire the workmanship. “It’s very pretty.”

He thinks I’m pretty. My soul fills with happiness.

“Bikes aren’t pretty, sweetheart. They’re powerful machines.” Hawke clutches the throttle and revs the engine, the sound vibrating through my chest. “One thousand CCs, like having a beast between your legs.”

He’s a beast, all leather and denim and muscle, and I’d like to have him between my legs, our two naked forms fused into one, his rough hands cupping my ass cheeks, lifting me into him.

God, I want this man yet I can’t have him. I squeeze my thighs together, struggling to contain my urge to touch him, to stroke him, taste him. He’s wrong for me in so many delectable ways and I shouldn’t be thinking of him. Nicolas, my stable, serious billionaire, should own my thoughts, my body, my heart.

“I have to go to work.” I step backward, retreating as I always do from temptation, and never have I been as tempted as I am right now.

My gaze lingers over Hawke’s wide leather-clad shoulders, massive arms, scarred knuckles. His tattoos remain hidden but I know they’re there, decorating his golden skin, as detailed as the designs on his bike. He’s big and broad, a mountain on wheels, giving the illusion of solidity yet destined to leave, the combination confusing my bad boy inner warning system.

“Hop on the back.” Hawke twists his torso and pats the tiny wedge of seat behind him, his palm smacking hard leather. “I’ll give you a ride.”

I skim my tongue over my bottom lip, the thought of sitting behind him, straddling his big body with my legs, pressing my breasts against his back, thrilling me.

“Do you have a helmet?” I ask, knowing the answer. Helmets aren’t mandatory in Chicago and a man like him doesn’t wear unnecessary protection. He takes risks, flying as free as the bird he’s named after, untamable and wild.

“No, I don’t have a helmet.” Hawke’s smile fades, his blue jean eyes growing serious. “But you’re safe in my hands, Belinda. I’ll be careful with you.” He extends one of his arms, holding his hand out to me.

I stare at his creased palm. It takes all of my willpower not to grasp his fingers, not to slide my hand in his, allowing him to pull me wherever he wants me to go.

“I can’t risk it.” I force the words, my heart screaming in protest.

“I see.” Hawke drops his hand. He doesn’t see. He thinks I’m talking about his bike. He doesn’t know the risk I can’t take is touching him.

Cynthia Sax lives in a world filled with magic and romance. Although her heroes may not always say, “I love you”, they will do anything for the women they adore. They live passionately. They play hard. They love the same women forever.

Cynthia has loved the same wonderful man forever. Her supportive hubby offers himself up to the joys and pains of research, while they travel the world together, meeting fascinating people and finding inspiration in exotic places such as Istanbul, Bali, and Chicago.Please visit her on the web at www.CynthiaSax.com