Review of ONCE MORE, MY DARLING ROGUE (The Scandalous Gentlemen of St. James # 2) by Lorraine Heath 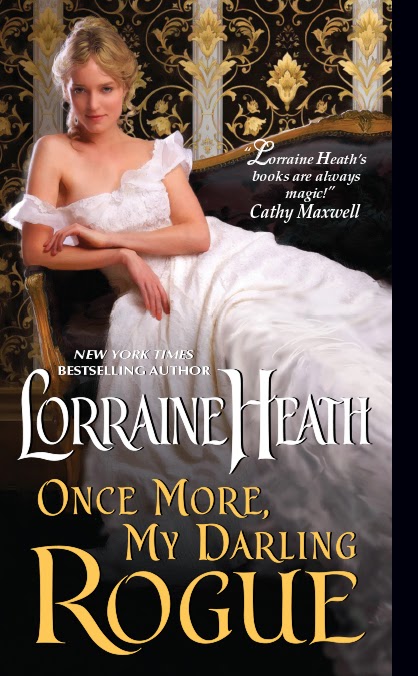 From New York Times bestselling author Lorraine Heath, comes the second book in a brand new series, The Scandalous Gentlemen of St. James, featuring three eligible bachelors...and the scoundrels that reside within each.

Born to the street but raised within the aristocracy, Drake Darling can't escape his sordid beginnings. Not when Lady Ophelia Lyttleton snubs him at every turn, a constant reminder he's not truly one of them. But after rescuing her from a mysterious drowning, he realizes she doesn't remember who she is. With plans to bring her to heel, he insists she's his housekeeper—never expecting to fall for the charming beauty.

While Ophelia might not recall her life before Drake, she has little doubt she belongs with him. The desire she feels for her dark, brooding employer can't be denied, regardless of consequences. So when Ophelia's memory returns, she is devastated by the depth of his betrayal. Now Drake must risk everything to prove she can trust this rogue with her heart once more.

Have you ever really wanted to read a book so badly, but you were afraid to start it? I had these exact feelings right before I picked up Once More, My Darling Rogue. It had nothing to do with the book itself. I loved the first book in Lorraine's The Scandalous Gentlemen of St. James series and I could not wait to pick up the second book. I was afraid that this book would have been another victim of the monstrous historical romance slump that has plague me the past three months. Nothing was sticking and I was beginning to get discouraged. When the tour for Once More, My Darling Rogue popped up, I knew that this was the time to try and defeat the evil slump... I was so glad I did because I absolutely adored this book. I love the fact that Lorraine's characters are so wonderfully flawed. Drake grows up knowing that his father is a murderer. He grew up on the streets before he stumbled on a family that took him in and loved him as one of their own. As a man with no title, he knows that he has little prospect of marriage, yet he's desperately attracted to Ophelia. It is all for naught, though. She snubs him every chance she gets. Ophelia is drawn to Drake, but she can't afford to fall for him. Her family is in dire need of money and there is no way she can marry a commoner. Drake and Ophelia go through one of the best character transformations. While Drake is simply thinking of putting Ophelia in her place when she looses her memory, it doesn't take long for his desire to protect her blossom when the story of her disappearance doesn't add up. Ophelia, on the other hand, starts the book as a royal snob when it comes to Drake. It only takes a few days as Drake's servant for her to start seeing past his commoner status and question her own social standing. She learns about his past and she starts to care about him. It is during their brief time together as a man and a woman with no title that they learn to see the other in a different light.

I don't know if my slump is gone or not, but I am so happy that I was able to fall in love with my second Lorraine Heath novel. I loved the first book and I adored Once More, My Darling Rogue. I can't wait to see who is next to find their true happiness. Since I am still new in this world, you'll have to let me know who you want to be in the next book. In the meantime, I'm just going to go along for the journey.

LORRAINE HEATH always dreamed of being a writer. After graduating from the University of Texas, she wrote training manuals and computer code, but something was always missing. After reading a romance novel, she not only became hooked on the genre, but quickly realized what her writing lacked: rebels, scoundrels, and rogues. She’s been writing about them ever since. Her work has been recognized with numerous industry awards, including RWA’s RITA® and a Romantic Times Career Achievement Award. Her novels have appeared on the USA Today and New York Times best-seller lists.