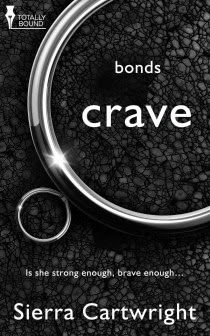 "If you're still in this room in sixty seconds, you'll get everything you're asking for." - Reece

She still craved him… The sight of a collar in her boyfriend’s drawer had stunned Sarah. Panicking, she had fled. But no other man has ever been his equal.

Two years ago, the woman he’d hoped to collar and marry disappeared. So Reece McRae is stunned to find his former girlfriend on her knees, behaving as the submissive he’d always wanted.

Is it too late? He should refuse her, but an undeniable sexual attraction consumes him.

Sarah had been under Reece’s spell from the moment she met him. When she found a steel collar in his drawer, she panicked. The idea of a lifetime of his relentless demands, sensual and otherwise, suffocated her.

In the years they’ve been apart, she hasn’t met his equal. Now, convinced one last night will vanquish his memory, she sets out to seduce him.

The Reece she returns to is even more determined to have his way. Is she now strong enough, brave enough, to surrender to his love?

In the two years since Sarah walked out of Reece's life, she spent every day regretting her decision. She was scared. Not of Reece, but of the level of commitment he wanted with her. She's been with other men, but none of them make her feel the way she felt when she was with Reece. Determined to get Reece out of her system, she is on a mission to seduce him. Reece, on the other hand, is stunned to see her kneeling in front of him. He refuses to let her back into his life and into his heart, but he can't say no to one more weekend with Sarah. Will the weekend be enough? Or will they want something more?

I wasn't quite sure what to expect with Crave. Not only was it my first book from Sierra Cartwright, it was also my first book to read from the publisher Totally Bound. I knew that they were known for their erotic romance books, but Crave was not what I thought it would be. Sure, it had a lot of amazingly hot scenes, but the element that I loved the most about the book was the characters. I loved all of them. First there was Sarah's tenacity. The girl knew what she wanted and damn it, she was going to get him. Then we have Reece and his three friends. Holy cow, can I have one of each? Their friendship was freaking fantastic. The banter between them was hysterical. I admired how they stood up for each other, especially after Sarah broke Reece's heart. They were skeptical about her and she had to win their trust just as much as Reece's. Above all, I really enjoyed Sierra's writing style. Crave was a mix of fun and sassy with a lot of sizzle. I loved the balance of the light moments and the strong BDSM moments between Reece and Sarah. They joke and tease just as much as they turn each other on. As the first book in the Bonds series, I thought Crave did an excellent job introducing the four friends. I knew it was a series, but wasn't sure whose book would be next. For the record, Kennedy is next and his book sounds even sexier. Yay!

She was previously published with Harlequin/Silhouette under a different pseudonym, and won numerous awards as well as a coveted spot on the USA Today bestseller list.

Last year, she was delighted to be among the launch authors for the exciting Clandestine Classics imprint from Total-E-Bound. The project generated international interest, and her contribution, the expanded Jane Eyre, was featured in segments on such shows as Jimmy Kimmell and Anderson Cooper Live. Time Magazine, Entertainment Weekly, and numerous other online sites also wrote features about the provocative new book.

Cartwright has been interviewed by USA Today, and she did a segment for the Orlando Fox affiliate with Chase Cain.

She’s a multiple CAPA nominated author who is delighted by the success of With This Collar, the first book in a six-book series “Mastered” from Total-E-Bound.

With This Collar has reached #1 on the Amazon UK Kindle Erotica chart, and #3 in the US Amazon Kindle bestseller list.