Spotlight & Excerpt from TEMPTING THE GOVERNESS by Vivienne Westlake 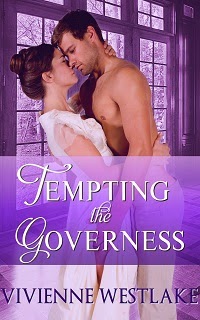 Never fall in love with your employer. Any respectable governess knew the cardinal rule. Christine Aubrey prided herself on her devotion to her charges, never suspecting that one day a former pupil would tempt her to break every rule in the book.

Theodore Blake was a “good boy” who grew up into a responsible man. Shouldering the burden of raising his sister’s children and managing his older brother’s affairs, Teddy has always done the right thing. But when his former governess returns to Birchwood, all he can think about is how good it would be to be bad.

As Charles scribbled on his parchment, she carried the babe over to the window. Dulcie put her small, chubby hand on the paned glass window and smiled. Christine glanced down below to see two men out on the expanse of grass, circling one another, clad in nothing but their breeches.

That wasn’t…no, was that Teddy? Where on earth were his clothes? What gentleman went about in such a state? She had taught him to comport himself with grace and refinement.

Christine pressed her face to the glass to get a closer look. One of the men was stocky, with bulging arms and legs and the other man, tall and lean with dark hair, edged away from him. They danced around one another for a moment when suddenly the man with the bulky frame aimed a punch at the one who looked like Teddy.

Her heart dropped within her breast. When Teddy rubbed his cheek and the other man paused to demonstrate a particular movement, she exhaled. It was merely a practice match with his trainer.

She knew that many men favored the sport of Boxing, but she’d never had occasion to see it in practice.

“Miss Aubrey!” Charles called. “I have the answer.”

Tearing her gaze away from the window, Christine turned toward the boy, and bounced the baby on her arm. Though she wanted to steal another glance at Teddy and his trainer, she did not want to draw attention to the fact that she was watching them.

Vivienne Westlake has been reading and writing romance since the age of fifteen. What makes her stories unique is her love of a sassy heroine who keeps the hero on his toes. Though she has a fondness for redeemable rakes, Vivienne’s favorite Jane Austen/Regency hero is Captain Wentworth.