Review of COVERING KENDALL (Love and Football #4) by Julie Brannagh 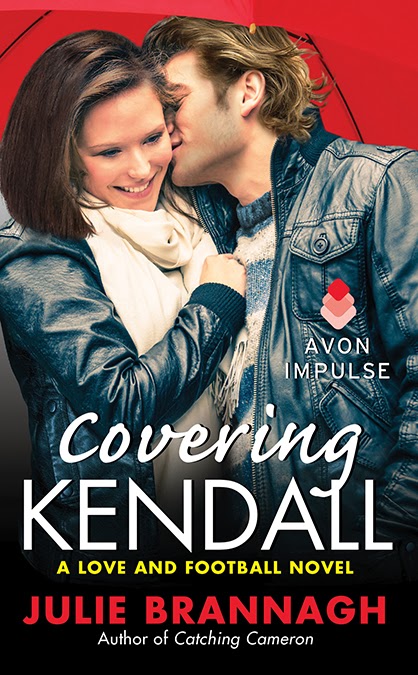 "One night, and we'll both go back to our lives. It'll be our little secret." - Kendall

Kendall Tracy, General Manager of the San Francisco Miners, is not one for rash decisions or one-night stands. But when she finds herself alone in a hotel room with a heart-stoppingly gorgeous man-who looks oddly familiar-Kendall throws her own rules out the window…and they blow right back into her face.

Drew McCoy should look familiar, he’s a star player for her team’s archrival the Seattle Sharks. Which would basically make Drew and Kendall the Romeo and Juliet of professional football…well, without all the dying. Not that it’s an issue. They agree to pretend their encounter never happened. Nothing good can come from it anyway, right? Drew’s not so sure.

Kendall may be all wrong, but he can’t stop thinking about her and he finds that some risks are worth taking. Because the stakes are always highest when you’re playing for keeps.

Julie Brannagh brings us back to Seattle for the fourth book in her Love and Football series. In Covering Kendall we meet new friends and catch up with a handful of our old pals. Kendall Tracy has gone where no woman has gone before - GM of a pro football team. Although she loves her career, she is under a lot of pressure from men waiting for her to fail. In order to be successful, she has strict rules... Rules that don't include sexy Drew McCoy. Rules that are quickly broken as they risk both of their careers in hopes that their secret romance will turn into forever.

I am having a lot of fun immersing myself in Julie's football lovin' world. Her characters are always romantic and lovable. And of course, it is a sports themed series, which is a theme that I'll devour. Covering Kendall was the perfect addition to a series that is already a favorite of mine. I loved the whole Romeo and Juliet vibe from Drew and Kendall. They found a way to fall in love and I don't think they would have let anything stand in their way. As strong and intelligent  individuals, they were that much stronger as a couple.  Kendall kicked ass and took names, while Drew crunched bones on the field. Then, of course, we have the many secondary characters that just made the book charming. Noah broke my heart. Call me crazy, but I'd love to see his mom matched up with a player. Hint, Julie... *wink* Of course, there is also Derrick and Seth. Both men sent me swooning numerous times during the story. Yum...

Covering Kendall sucked me in from the first page and wouldn't let me go until I finished. And now I'll try to wait patiently to see what Julie has in store for her favorite Sharks. Key work: try... I can't make any promises...

Julie Brannagh has been writing since she was old enough to hold a pencil. She lives in a small town near Seattle, where she once served as a city council member and owned a yarn shop. She shares her home with a wonderful husband, two uncivilized Maine Coons and a rambunctious chocolate Lab. When she’s not writing, she’s reading, or armchair-quarterbacking her favorite NFL team from the comfort of the family room couch. Julie is a Golden Heart finalist and the author of contemporary sports romances.