Review of DEFYING THE DUKE + a visit with Meta Mathews 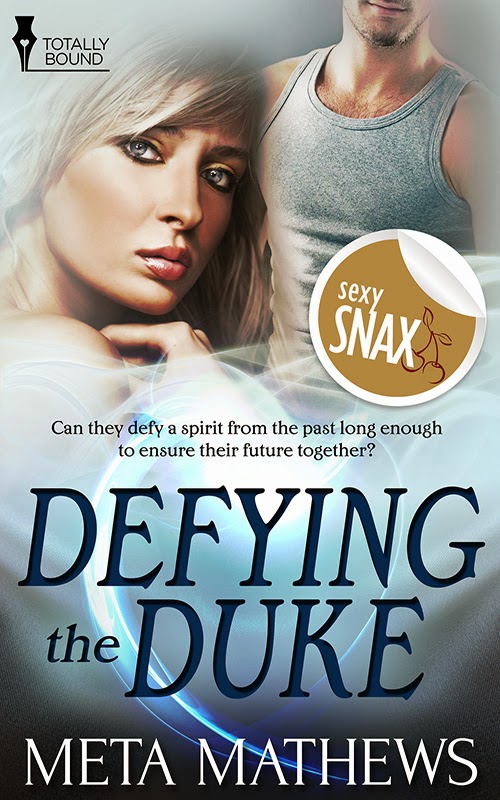 Can Amelia and Jack defy a spirit from the past long enough to ensure their future together?

Having discovered that there's no demand in Atlanta, Georgia, for college graduates with a Ph.D. in history, Amelia Comstock accepts a job from her former professor to research the mysterious disappearance of the Duke of Durbane two hundred years ago. Unfortunately, her research seems to have stirred up the duke's spirit which—convinced she's a courtesan—visits her during the night intent on pleasuring her sexually. When Amelia tries to quit her job in hopes of ridding herself of the duke, her boss tricks her into meeting his nephew, Jack, who bears an uncanny resemblance to the duke and who is struggling with his own unwanted visitor from the past.

When Jack Durban, a computer programmer, accepted a transfer to Atlanta, he didn't expect his uncle Ben, a professor and historian, to recruit him to help research the disappearance of the Regency-era Duke of Durbane. Nor did he expect to start getting ghostly visits from a woman wearing a ball gown who insists on pleasuring him against his will. Determined to end his research, Jack agrees to do one last favor for his uncle, which results in his meeting Amelia Comstock, a beautiful historian who strongly resembles his pesky visitor from the past. Jack soon realises that he and Amelia share a unique connection, meaning they must work together to defy the duke so they can enjoy their future together.

As romance readers, I'm sure we've all wondered what would happen if our favorite hero jumped out of the book and appeared in front of you. Would you freak out? Would you have your way with him? Now what if you don't have a choice? That is what Amelia and Jack come up against in Defying the Duke. As they research the Duke of Durbane, they have visits from the Duke and his wife. What starts as a sexual dream come true, turns into dubious consent encounters until Amelia and Jack find out the truth about what happened to the Duke.

Reading Defying the Duke was a fun way to spend a hour one rainy night. I liked that it had a little of everything to offer. When I explained it to a friend of mine, I called it a contemporary romance with hints of paranormal, historical, mystery, and fate all wrapped up in one pretty package. My only wish was for Defying the Duke to be a full novel because I felt that flashbacks between the present time and the past with the mystery of the Duke of Durbane would have been awesome. As a novella, however, I really enjoyed it. I liked the characters. I loved the idea of the past visiting and interacting sexually with Amelia and Jack. And I liked the mystery they had to solve. Most of all, I loved the hint that this all could have happened before and that Amelia was meant to meet Jack once again. All in all, Defying the Duke was a lot of fun packed in one short novella.

A Study of Courtesans
by Meta Mathews

To me, one of the most fascinating aspects of the Regency period was the world of the courtesans, some of whom wielded great power and accrued wealth along the way.

Writing Defying the Duke made me curious about how the courtesans of this period actually lived. My research led me to a book by Katie Hickman named Courtesans: Money, Sex and Fame in the Nineteenth Century. Ms. Hickman discussed five famous courtesans, but the one of most interest to me, because she was influential during the Regency, is Harriette Wilson.

Harriette was one of fifteen children, the product of an unhappy marriage between a Swiss watchmaker and his English wife. Harriette reported being afraid of her father. Perhaps because of this, she and three of her sisters left home to become courtesans. Harriette was the most successful of the sisters and later, after publishing her Memoirs, she also became the most notorious.

A near-contemporary of Jane Austen, Harriette lived in a world that was the opposite of Miss Austen’s. Harriette liked to have a good time and she liked sex. She also enjoyed being independent. She was not, of course, invited to the homes of respectable ladies, but she and her sisters sponsored their own entertainments, including an annual Cyprians’ Ball during which these “Fashionable Impures”—or demi-reps as they were sometimes called—played hostess for the men who were their protectors or admirers.

Eventually, Harriette became so popular that even members of the nobility were eager to make her acquaintance, but she was careful not to make herself too available, thus creating even greater demand for an introduction to her. As Ms. Hickman wrote about Harrriette, “An introduction to her,…was not a favour to be lightly granted. Supplicants were strictly vetted, as Harriette liked to be sure that they were ‘of the first respectability’.”

Although sought after by men as famous as the Duke of Wellington, when Harriette eventually fell in love, it was with John Ponsonby, a man not particularly well known today. Lord Ponsonby (a baron) was considered by many to be the most handsome man in England. He was also related to the cream of British aristocracy and was married to the daughter of an earl.

When Ponsonby became Harriette’s protector, they agreed that if his wife ever found out about them, they would go their separate ways. This eventually happened, of course, and when Ponsonby broke off the relationship with Harriette, she was devastated.

Harriette lived to be 59 years old. In later years, due partly to her inability to handle money, she was reduced to writing her Memoirs and, in effect, blackmailing men who preferred to pay rather than be mentioned in one of the twelve installments. Even this did not save her from a sad end. As she aged and her health deteriorated, she was plagued by debts she couldn’t pay and she was forced to beg for money from a former lover who sometimes remembered to send the funds and sometimes did not.

Still, at the height of her popularity, she was as wealthy as and probably more influential than most women of that era. She could also claim independence throughout most of her life. Still, it is unfortunate, in my opinion, that by achieving the independence she craved so deeply, she was forced to forego the security of marriage and thus at the end of her life became dependent on the generosity (or lack thereof) of a former lover.

Meta Mathews is—fortunately or unfortunately—one of those writers who can't pick a time period and stick with it. Her first published book was a sweet contemporary set in the American South (where, not coincidentally, she lives). After writing another contemporary, she veered back in time a couple of centuries for the setting of a traditional Regency, which won the National Readers' Choice Award that year. Next she decided to stick with the Regency setting but move from sweet to rather steamy (to put it mildly). Now, with her first book for Total E-Bound, she's combining the two time periods for an erotic paranormal set in the present in the American South but with visitors from Regency England. Where she'll go from here is anybody's guess. 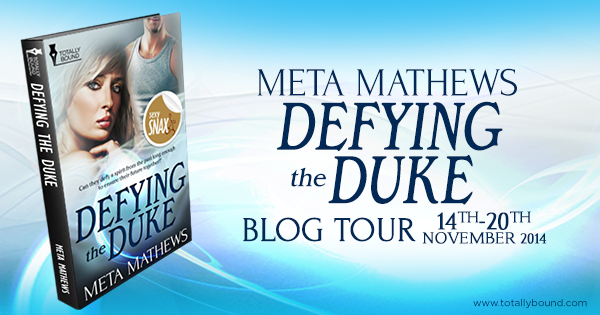