Review of UNLEASHED (Love to the Rescue #1) by Rachel Lacey 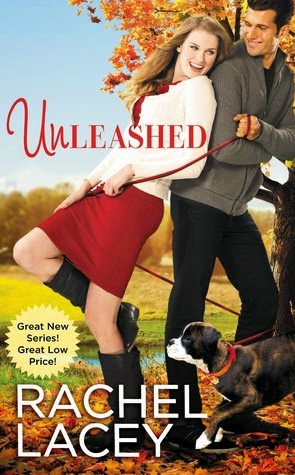 "I like you, Cara. A lot. If I wasn't leaving town in a few weeks, I'd be courting you so hard right now your head would spin." - Matt Dumont

What happens when you find the right one at the wrong time?

Cara Medlen has a serious case of animal attraction. And it's not because of all the foster dogs she's rescued. She's got it bad for her incredibly sexy neighbor. Her one rule: Don't get attached. It's served her well with the dogs she's given to good homes and the children she's nannied. Yet the temptation of Matt's sexy smile might just convince her that some rules are made to be broken.

Matt Dumont doesn't need his skills as a private investigator to detect disaster on the horizon. Cara is everything he thought he'd never find-gorgeous, funny, and caring. But there's no way he can start a relationship just as he's about to move to another state. Talk about bad timing. As their attraction sizzles too hot to deny, they'll have to make a decision: forget the consequences and let loose, or forget each other and let go...

If I had to pick one word to describe Rachel Lacey's debut novel... Well, I would scoff at the idea first because limiting it to one word is totally not fair. Okay, three words... Adorable. Sweet. Puppy love. Unleashed was an adorably sweet novel that left me with a serious case of puppy love. The cover is what initially drew me towards the book. I wanted to read Unleashed the moment it appeared on my Kindle, but I needed to wait until I was finished with the book I was reading at the time. But I wanted to get a feel for the book, so I gave in a little and read the first couple of chapters. Let's just say that it may have been the cover that grabbed my attention, but it was Rachel's voice and fabulous characters that stopped me from putting the book down. Don't you just love it when you finish a book in one day?

Cara Medlen has a ten year rule... She has to be in remission for ten years before she can live. Cara does everything she can to enforce her rule. Rather than having her own dog, she fosters for a local Boxer rescue. She can't risk falling in love with her handsome neighbor and decides to avoid Matt at all costs. Matt Dumont doesn't know what to think of his neighbor. Thanks to gossip flowing around their town houses, Matt believes that Cara is up to no good with her dogs and he's determined to stop her. When he realizes that his assumptions were all wrong, Matt's attraction towards Cara blooms until he can't stay away. He's drawn to Cara's beauty, but it is her good heart that wins his, He has his own reasons why he should be avoiding Cara, but he can't. With his upcoming move and her ten year rule, both Matt and Cara have to learn the importance of living in the moment.

There was not one page of Unleashed that I did not adore. Matt and Cara broke my heart and pieced it back together. Cara was amazingly selfless. She puts the well being of others before her own. It kills her to give away the dogs she's grown to love, but she knows that it is best for them to find their forever home, even if it constantly reminds her that she may never be as lucky. She desperately wants to be able to live, but she's so scared that her cancer will return and she'll lose her battle. She's seen what it does to the loved ones of other cancer patients and she can't bring herself to let that happen to anyone she loves, especially Matt. Speaking of Matt, can we please clone him? He loves his family and will give up anything for them. He loves animals and will go to great lengths to help Cara with her rescues. When it comes to Cara, Matt is incredibly gentle and so much in love. He wants to be with her for the short time, but he knows that it'll break both of them when it is time for him to move home to care for his mother. When they finally give in, they are so freaking sweet together. The tender moments they shared were so very swoon-worthy.

With her debut novel, Rachel hit it out of the doggy park. The romance was a slow build as Matt and Cara got to know each other first. They fought their attraction for as long as they could before it ignited one cold night. The ending made my heart soar. There were sugary sweet moments, funny moments (especially when Merry was around), sizzling hot moments... Unleashed had it all. I didn't want to leave Rachel's world and I was ecstatic to learn that Unleashed is the first book in a series. I can't wait for Rachel to sweep me away with the next book. I hope it'll be the first of many to come.

I grew up with a passion for reading and an unquenchable need to write stories of my own. As a girl, my journals and, later on, computers were always filled with snippets of stories and dialogue. These characters got inside my head and wouldn’t rest until I’d written them down. The number one item on my bucket list has always been to publish a novel, and I am beyond thrilled that my dream is coming true with Unleashed.

The first thirty years of my life led me around the globe on some amazing adventures. I’ve been climbed by a monkey on a mountain in Japan, gone scuba diving on the Great Barrier Reef, and camped out overnight in New York City for a chance to be an extra in a movie. These days, I’m a stay-at-home mom to my five-year-old son, and the majority of my adventures take place in the books I write. I currently live in warm and sunny North Carolina with my husband, our son, and a variety of rescue pets.