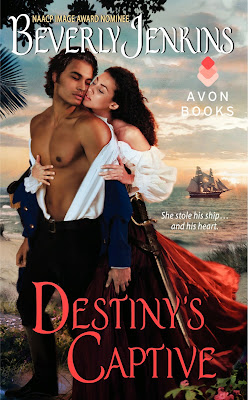 In national bestselling author Beverly Jenkins' Destiny series, the Yates men play hard and live hard. And when they find that special woman, they fall hard . . .

Noah Yates fully believes in the joys of a happy family and a good wife. But that's not the life for him. No, he would much rather sail the wild seas in search of adventure, not tied down. But then the unthinkable happens . . . he finds himself literally tied down. To a bed. By a woman.

And Pilar isn't just an ordinary woman. She's descended from pirates. And after giving him one of the worst nights of his life, she steals his ship! Now Noah is on the hunt, and he'll stop at nothing to find this extraordinary woman . . . and make her his.

“Hold him while I teach him some obedience.” The knife sliced through the cheek of eighteen-year-old Noah Yates, and the searing pain made him cry out as he struggled against the three men keeping him in place.

“My mother will pay for my release!” Noah pleaded, hating that he was begging, but it was all he had.

The watching crewmen laughed and a voice rang out, “Got us a mama’s boy, do we?”

“She as pretty as you?” another yelled.

Bruised from all the fighting he’d done since being shanghaied last evening, Noah Yates was weary, and yes, afraid of what might happen next. His older brothers, Logan and Drew, were un-doubtedly turning San Francisco upside down in an effort to ascertain his whereabouts, but they’d never find him—not on a ship far out at sea. His fate and that of the others unwillingly forced aboard the ship rested in the hands of the foul- breathed Captain Simmons.

“I’m going to ask you one more time: Do you want to sign on with my crew?”

“Take him belowdecks and put him in irons! He’ll change his tune. Bring that next one over

So Noah was dragged belowdecks and chained to the floor by his wrists and ankles. Earlier, the captain expressed an aversion to confiscating religious items, so he’d let Noah keep the gold cross hanging from a chain around his neck, but his boots had been taken along with his other possessions, leaving him clad in his shirt and trousers. Two other men eventually joined him in the dark, damp hold. One, who appeared to be about Noah’s age, introduced himself as Kingston Howard, a dockworker from Los Angeles. The third offered neither name nor conversation. He simply sat and wept.

Blood from the knife wound seeped into the corner of Noah’s mouth and as he used his shirted shoulder to staunch the flow, the pain burned bright. Closing his eye until the fiery wave ebbed, he tried not to think about how frantic his family must be over not knowing his fate and how terrified he was about what might lie ahead.

Beverly Jenkins is the author of thirty historical and contemporary novels, including four previous books in her beloved Blessings series. She has been featured in many national publications, including the Wall Street Journal, People, the Dallas Morning News, and Vibe. She lives in Michigan.