A visit with Willa Edwards, author of Owned for Christmas Today we are joined by the lovely Willa Edwards, whose new book, Owned for Christmas, came out on December 19th.


Take it away, Willa!

From the very beginning of my writing career I’ve been thinking about and writing ménages. I’d read plenty and the many different combinations. Before, I couldn’t imagine writing a ménage involving two brothers. It just wasn’t a situation I could see two siblings getting into. I’ve seen how brothers treat each other, how they fight and break each other’s toys just so the other won’t have it. I have a brother, and we did some of the same things. I couldn’t imagine a woman in the middle of that mess.

All my characters come to me all a little differently. Some are coy and subtle, only revealing little parts of themselves, slowly opening themselves and their story up to me. Others let me know what they are doing from the very beginning, but not why. Kate, Daniel and Grant were exactly the opposite. They came to me right away. Fully formed, bold and brash, letting me know all their motivations and conflicts. All their struggles and exactly why they needed this story. And just as I’d always dreaded, Kate walked into this story, stuck between two brothers.

Daniel and Grant’s conflicts didn’t originate or end with Kate. Like all siblings, their arguments reached almost back to childhood. But there’s no doubt Kate’s arrival in their lives lit the fuse between them, one that won’t easily be extinguished. It’s only fitting that she helps them put their relationship back together. With all the fighting between them, Kate definitely gets caught between them, between their old scars and new punches.

But what I never anticipated from writing a ménage featuring two brothers was how their similarities just as much as their differences are what make this ménage work. Both of these men have been raised by good old fashioned values. They were both raised to take care of their own, to protect their woman, no matter what. Though it shows up for both of them in different ways (with Daniel sticking by Kate’s side when she needs him, and Grant letting her go because he thinks that is what’s best for her). It’s this desire that also allows them to be together in this unconventional relationship, because that seems like the best way to take care of Kate. It may be their differences that Kate needs, but it is their similarity in character which means that they can all be together and make this ménage work.

Though I may have been apprehensive about writing a ménage featuring two brothers before, now I know that there are some pluses to writing about two brothers together. And there’s no doubt in my mind, Kate is happily torn between these brothers. I hope you’ll check out my new book, Owned For Christmas, now available with Totally Bound Publishing. And find out exactly how Kate ends up owned two brothers this Christmas season.

Although she had no idea Grant and Daniel were brothers, Grant revives all those needs that Daniel can’t fulfil. But she won’t give up the man who helped mend her broken heart after Grant shattered it—even if she has to bury the submissive part of herself to do it.

A year ago, Grant Farrell left the woman he loved—and the best sub he’s ever controlled—to tend the family ranch after his father’s death. It almost tore his heart out to leave Kate but he had no other choice. He didn’t realise how much it had hurt them both until she shows up at his family’s home on his brother’s arm.

Now more than ever he’s determined to keep her in his life, even if he has to share her to do it. But half measures won’t be enough anymore. He needs either to own her completely, or give her up to Daniel for good.

Can he convince Kate to forgive him for the pain he caused her and the secrets he kept? Or will he lose her to his brother for his past mistakes? 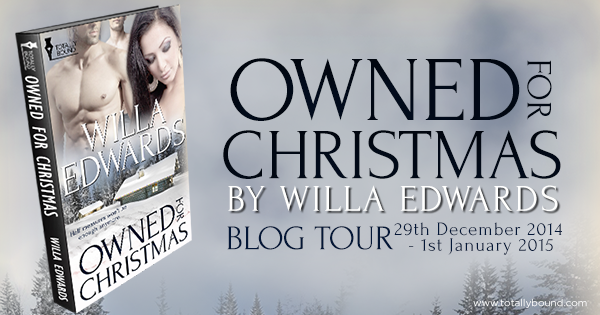