Spotlight & Excerpt from The Loving Daylights (B.L.I.S.S. #3) by Lynsay Sands 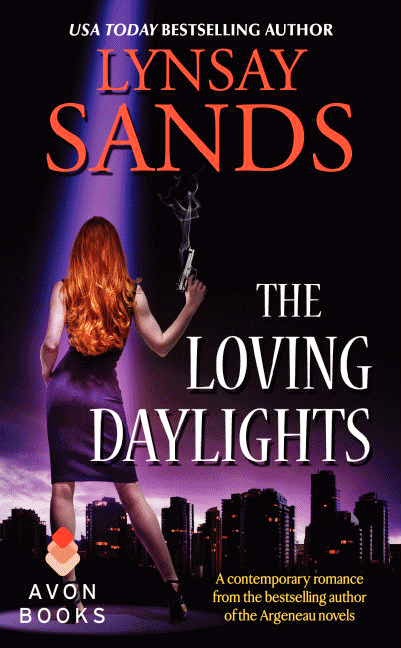 Shy Jane Spyrus loves gadgets. She can build anything B.L.I.S.S. needs in the international organization’s fight against crime-although its agents aren’t exactly lining up at her door. Some of them think her inventions are a little too . . . well, innovative. Like her shrink-wrap prophylactic constraints, or her spray-on truth serum.

Of course, you can’t use wacky inventions to fix all your problems; Jane knows that better than anyone. Her neighbor has been kidnapped, driving that point home. She will have to team up with another human being-and Abel Andretti arrives just in time. He will help Jane find her neighbor, stop a villain, and most of all he will show Jane to love the daylights out of something without batteries.

“I can’t believe you made it on time for a change,” Lizzy teased gently as Jane hung her jacket over the back of the empty chair she’d saved for her as promised.

Jane gave a somewhat forced smile as she sat down, very aware that Dick had followed her. Much to her relief, he didn’t comment, but kept on walking up the room, taking one of the two seats at the far end of the table so that he sat with his back to the windows.

“Y will be impressed to find you here and not stumbling in after she starts the meeting,” Lizzy continued to tease.

Jane grunted. Y never seemed upset at her tardiness, but almost expectant of it. Jane half-suspected that was part of the reason Dick Hedde was so obnoxious to her. Y seemed to like Jane and was very patient with her lateness. Dick, however, wasn’t well-liked by anyone and tended to take that out on Jane.

As if summoned by her thoughts, the door suddenly opened allowing Y and Mr. Manetrue into the room. While Y was the head of BLISS Mr. Ira Manetrue was the head of D. & C. and Jane’s immediate supervisor. Jane got along well with him too, much to Dick’s further annoyance. The gentleman, an old flame of her grandmother’s, had taken Jane under his wing the moment she started at BLISS. He considered himself something of a mentor to her. All of which made Dick’s loathing for her almost understandable. Jane could have told the man that if he would just be respectful and less of a greasy brown-noser he’d get further, but he made himself so unpleasant she couldn’t bring herself to do so. For the most part, she ignored him like everyone else. Or tried to.

“Good day everyone.” Mr. Manetrue greeted the room as he and Y took their seats at the far end of the table opposite Dick. Once the two of them were settled with notepads and pens at the ready, he asked, “Who’s going to start the presentations today?”

His gaze zeroed in on Jane, but she merely glanced down at the pen she was twiddling nervously between her fingers. She would have to make her presentation eventually, but didn’t have the courage to actually volunteer to do it...and be first at the presenting. Fortunately, others weren’t so shy and several stepped in ready to lead the way. Jane felt relief seep through her as Mr. Manetrue gestured for someone else to start.

Time passed swiftly as idea after idea and several prototypes were presented and displayed. Jane had a terrible time paying attention. She was all too aware that as each person finished their presentation, she was that much closer to having to make her own. She started trying to

remember what she’d planned to say. Jane always memorized a sort of speech for these meetings, and always forgot every word the moment she stood up to speak. This time it appeared to have fled sooner than that. Her mind was already a blank.

LYNSAY SANDS is the nationally bestselling author of the Argeneau/Rogue Hunter vampire series, as well as numerous historicals and anthologies. She’s been writing stories since grade school and considers herself incredibly lucky to be able to make a career out of it. Her hope is that readers can get away from their everyday stress through her stories, and if there’s occasional uncontrollable fits of laughter, that’s just a big bonus. Please visit her on the web at www.lynsaysands.net.