Review of Owned for Christmas by Willa Edwards 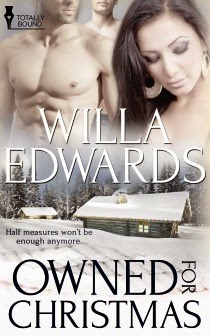 "This will be your first lesson in domination. You have to trust your sub to know her own limits. She can shake that sleigh bell any time she's had enough, but I don't think she wants to. Do you, pet?"  - Grant Farrell

Although she had no idea Grant and Daniel were brothers, Grant revives all those needs that Daniel can’t fulfil. But she won’t give up the man who helped mend her broken heart after Grant shattered it—even if she has to bury the submissive part of herself to do it.

A year ago, Grant Farrell left the woman he loved—and the best sub he’s ever controlled—to tend the family ranch after his father’s death. It almost tore his heart out to leave Kate but he had no other choice. He didn’t realise how much it had hurt them both until she shows up at his family’s home on his brother’s arm.

Now more than ever he’s determined to keep her in his life, even if he has to share her to do it. But half measures won’t be enough anymore. He needs either to own her completely, or give her up to Daniel for good.

Can he convince Kate to forgive him for the pain he caused her and the secrets he kept? Or will he lose her to his brother for his past mistakes?

Now this is how love triangles should end. Why does only one guy get the girl? Maybe the girl wants both... After all, it can be more fun that way... That's how I would describe Willa Edwards's Owned for Christmas. It was just plain fun to read. I liked the characters and how they balanced each other. Kate was a mix of sugar and spice. She truly loved the sweet natured Daniel, but also craved the spiciness that only Grant could provide. Daniel loved Kate enough to know that something was missing in their relationship. He knew that she was still recovering from a broken heart, but Daniel could never imagine that it was his own brother that broke it. As for Grant, he also loved Kate, but it took him letting her go to realize it. Now this is where things get really interesting...

At first glance, Owned for Christmas sounded like the typical Christmas romance. Boy loves girl. Boy brings girl home to meet family. Girl finds out that the boy who stole her heart is her new guy's brother. Girl hates seeing brothers fight and decides that is is better for everyone if she left. That is where Owned for Christmas moves into its own type of Christmas romance. I had so much fun reading this book. I know that Christmas is over, but if you are still in the holiday mood (or just want to read a ménage romance), give this one a shot. The best thing is... The guys get the girl and they still fight for her.