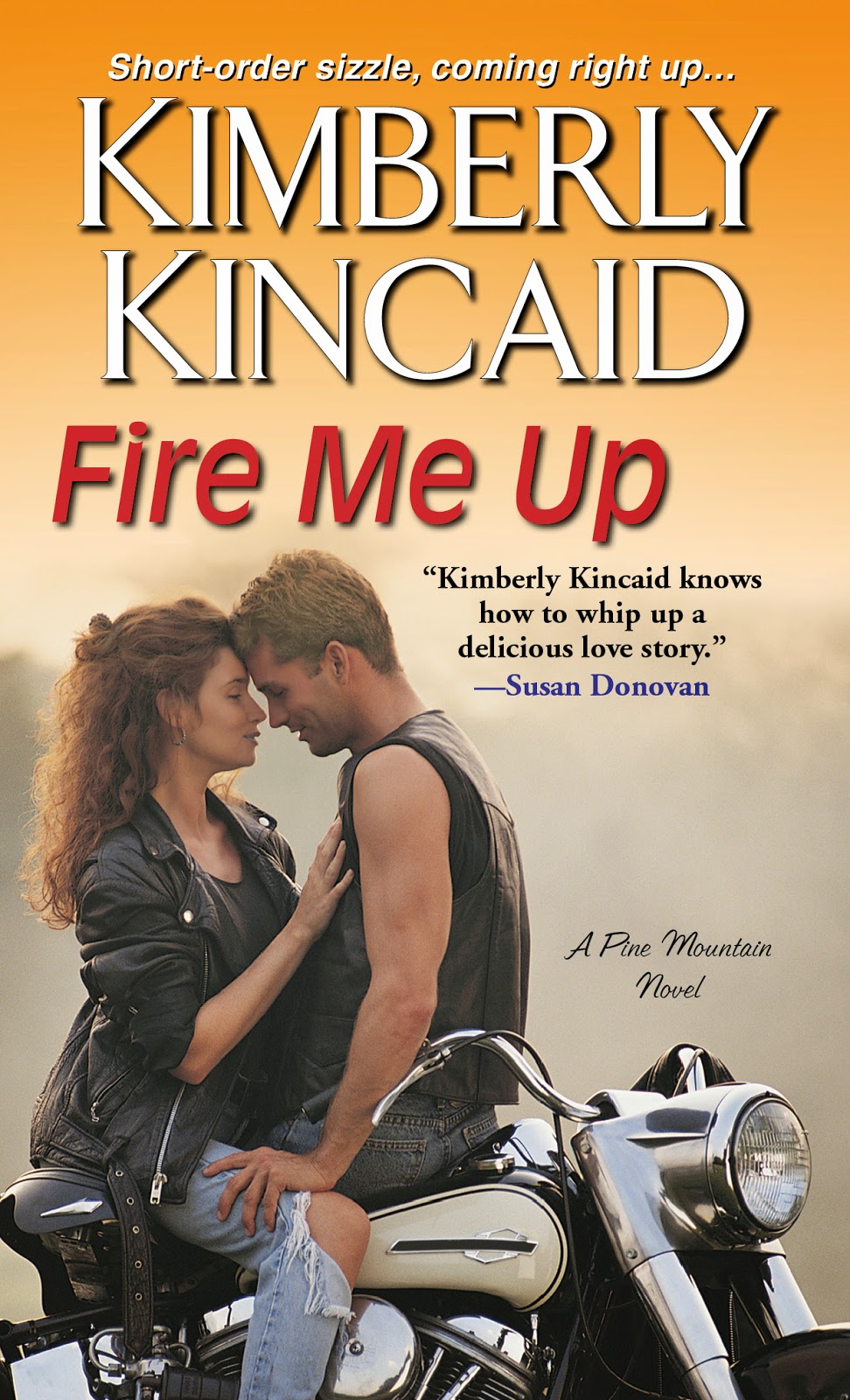 IF YOU CAN’T STAND THE HEAT…

Teagan O’Malley can handle a crisis. She’s a paramedic, it’s her job. But she never expected to land in the kitchen of her father’s pub, with no notice, no cash, and no room for error. The kitchen is not her favorite place. Lucky for her, she just scraped a bad-boy chef off the pavement after a motorcycle accident—and something about him says he can turn up the heat in more ways than one.

Adrian Holt has had a rough few years, and he’s not eager to get tangled up in anything more complicated than a good risotto. But with a broken arm and a head full of bad memories, he needs a challenge to keep him sane. Teagan’s dare-me attitude and smoldering mess of a bar are just what the doctor ordered. And the two of them together might cook up some even better medicine…

“You want a glass of wine?”

“What?” She blinked, but no way was he going to let go of distracting her now. Plus, if anything could divert her attention and make her relax it was a bottle of wine and a kickass meal.

“Call it an exercise in relaxation. Are you in?” He put just enough mustard on the words to make them a dare, knowing she’d bite. But her stress was going to swallow her whole if she didn’t offload some of it. Teagan wouldn’t last three days, let alone three more weeks, at the pace she’d been carving out.

She paused. “Wine’s not really my thing, remember?”

“Mmm. You’ll like this.” Adrian watched the flare grow in her eyes as he slid a bottle of merlot from the adjacent pantry, returning to the work space to unearth a corkscrew from a drawer. “Come on, I’ll even let you uncork it. What do you say?”

Teagan unfolded her curves-and-attitude frame from the bar stool, but she didn’t hesitate to reenter the kitchen. Her movements challenged him right back as she curled her fingers around the bottle, easing the sharp, silver point of the corkscrew into the cork without looking.

It didn’t come out sounding like a compliment, and heat stirred low in Adrian’s gut before heading south. He knew that daring her into the kitchen, even with good intentions, was a bad plan. Experience told him putting two volatile things too close together only meant they were bound to explode.

But then she looked up at him with a slow and sexy smile on her decadent mouth, and damn it, part of him wanted to watch her ignite.

“If you want to insult me, you’re going to have to do better than that. I’ve heard the presumptuous thing once or twice before.” Adrian pulled the wineglasses he’d borrowed from

the Double Shot from a cupboard, placing them just far enough away on the counter that Teagan would have to take a step closer to pour.

If he was going to get her into the kitchen, he might as well go all freaking in.

The cork gave a soft pop as she released it from the mouth of the bottle, and she inclined her head at him in thought. “Okay. How does pompous ass suit you?”

Damn, he wanted this woman more than he wanted his next freaking breath. “Barely lukewarm, Red.”

“Egotistical cretin?” Teagan asked, the words sounding strangely seductive in her throaty voice as she cut the space between them to pour.

Her hip brushed against his, ever so slightly as she leaned in to place the bottle on the counter, pulling back to return to the breakfast bar. Adrian let out a breath, sliding one of the glasses toward her before lifting the other to take a sip. The rich notes of the wine slid across his palate and lingered, heady and smooth on his tongue, and he edged closer to the counter, watching her.

“Getting warmer, huh? Hmm.” Teagan tapped a finger against her lips in thought before brightening. “Narcissistic muttonhead,” she offered, folding her hands in front of her with an angelic smile.

The corners of Teagan’s strawberry-red mouth twitched upward into a smirk that sparked through his blood, and she nodded down at the stove. “And it looks like you’re boiling.”

Understatement. Of. The. Year.

“Okay, wine boy,” Teagan said, holding on to her smile as she took the glass of merlot in her hand. “Do I need to do anything highbrow before I drink this?”

“Hold the glass up to your lips and breathe in first,” Adrian said, moving to gather more ingredients from the narrow pantry by the refrigerator.

“You’re always this bossy in the kitchen, aren’t you?”

He didn’t hesitate. “Yes.” She scoffed softly, but he continued before she could work up a smart comment. “In order to enjoy a good glass of wine, you have to do more than taste it. You’ve got to gather it in and make it a part of you.”

Adrian put the bag of flour he’d retrieved from the pantry on the counter and nudged the boiling pot, watching the potatoes gently rock and nestle together. “If you hate it, that’s fine. But you should try it the right way before you decide.”

She ran a finger around the base of the glass. “I guess I never thought of wine, or any food, really, as something to take my time with.”

“Don’t feel bad. A lot of people rush through what they eat and drink—they don’t take time to smell it, to feel it in their mouths, to really experience it.” He drew his wineglass up to his face, letting it brush against the rough stubble on his chin before inhaling. “Taste is the last sense you use on the things you eat and drink, although everyone thinks it’s the only one.”

Her expression softened, surprising him. “Okay, I’ll humor you. You want me to just pretend I’m taking a sip, only smell it instead?”

“It’s not milk with a questionable expiration date.” He gave in to his satisfied smile and leaned in closer, until only a scant stretch of Formica countertop and his dwindling willpower separated their bodies. “Don’t just smell it. Breathe it in. Experience it.”

Teagan’s laugh caught him like a sucker punch to the sternum, but she didn’t pull back to reclaim the space between them. “‘Experience it,’” she repeated, dropping her eyes seductively to the glass.

“Yeah,” Adrian managed, trying to right himself. Damn it, she was killing him with those endlessly long legs parted over the bar stool just wide enough to make him wonder what else she could do with them. “Let it take care of you a little.” He motioned to her glass, knowing his words would hit home.

“Screw you,” she muttered, but he caught the twist of her sardonic smile as she raised the rim of her wineglass and inhaled. Her eyes shuttered closed, cinnamon-colored lashes sweeping low over her face, and even though his self-protective instinct screamed at him not to, he impulsively moved closer.

“See? You can smell the flavors before they even hit your tongue. This merlot is rich, complex. And it tells you all about itself before you drink it.”

Teagan kept her eyes closed and breathed in again, her bottom lip pressing slightly against the rim of her glass, and she gave a small nod and sigh combination that shot straight to his cock.

“Breathing it in enhances the experience. It makes you want it more.” Adrian braced himself against the narrow stretch of countertop between them, palms hot on the cool surface. He leaned in close enough to feel the heat coming off of her, to smell the earthy scent of rosemary where her neck met her ear. The irony of it hit him full-on.

Just like the wine, when he breathed her in, it only made him want her more.

She raised the glass, tipping the ruby liquid along its curve until it reached her lips. Adrian watched her, completely entranced by the newness of the experience on her face, as she took a sip and cradled the glass in her palm. A drop of wine lingered on her bottom lip, staining it a perfect, sensual red. God, Adrian wanted to have that bottom lip for breakfast, to trace it with his tongue and relish the flavor of her in his mouth. He didn’t just want to kiss her, but to taste her, to savor her.

Kimberly Kincaid writes contemporary romance that splits the difference between sexy and sweet. When she's not sitting cross-legged in an ancient desk chair known as "The Pleather Bomber", she can be found practicing obscene amounts of yoga, whipping up anything from enchiladas to éclairs in her kitchen, or curled up with her nose in a book.

Kimberly is a 2011 RWA Golden Heart® finalist who lives (and writes!) by the mantra that food is love. Her digital Line series is all about the hot cops and sexy chefs of Brentsville, New York. She is also the author of the Pine Mountain series, which follows small town singles as they find big-time love. Kimberly resides in Virginia with her wildly patient husband and their three daughters.