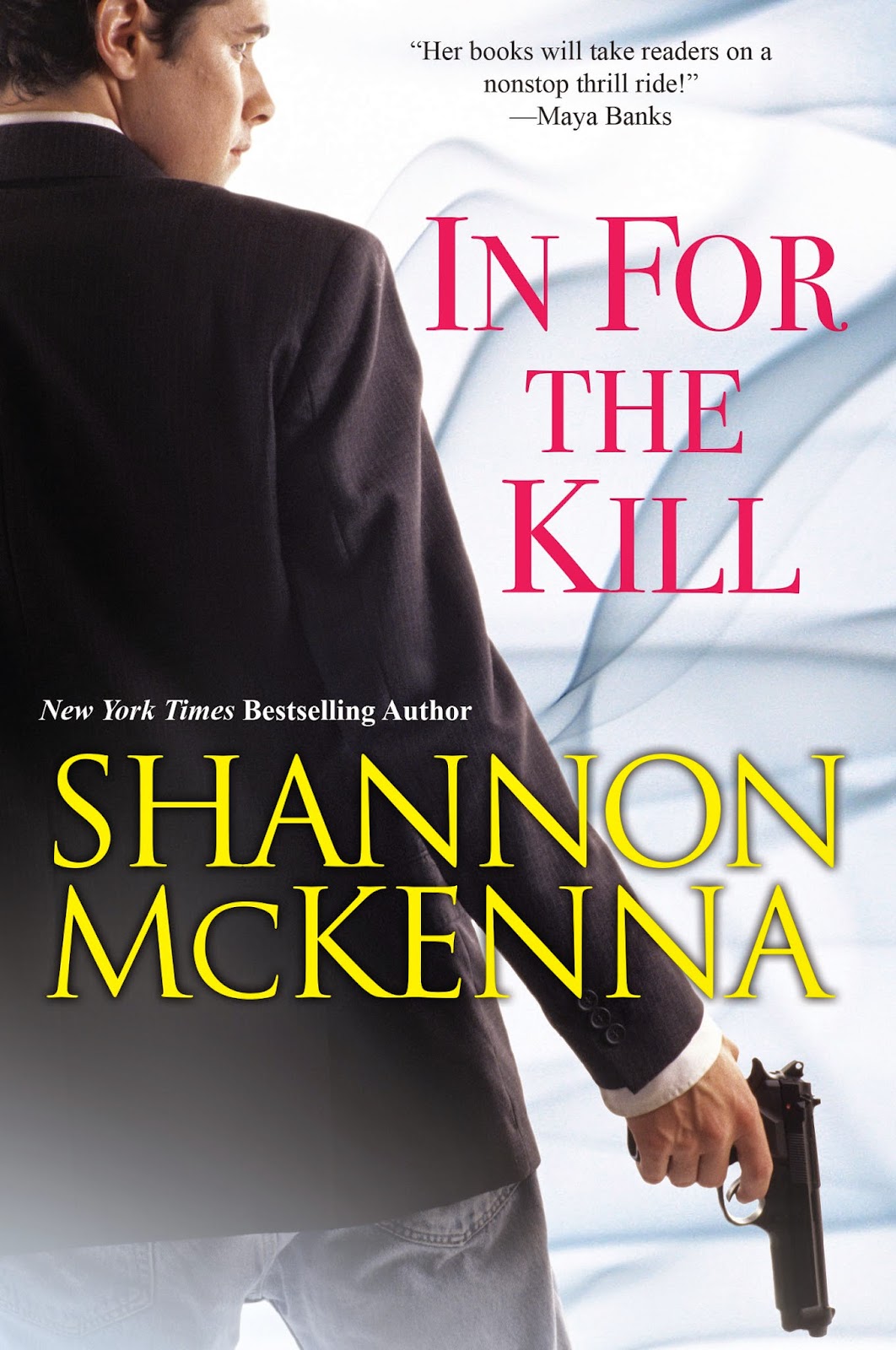 The risks ex-cop Sam Petrie has taken have turned his life into a train wreck. So he has nothing to lose by doubling down as the elusive Svetlana Ardova’s unwanted bodyguard on a potentially deadly trip to Italy.

Ever since the McClouds rescued Sveti from certain death, her crusade against modern slavery has blazoned a bulls-eye on her chest, but when one of the threats against her almost hits the mark, Sam’s protective instincts go into overdrive. Every lethal obstacle and trap they encounter ups the stakes—and the undeniable heat between them.

Now they’re spiraling in on a deadly and explosive secret—one that could either redeem them or destroy them . . . and the closer they get, the shorter the fuse . . .

Her eyes dilated. He wished he had the super-senses they said Miles had now. His heart pounded too hard to hear hers, certainly at that distance. He started to close that distance, and

she skittered back a pace. It took all his willpower to stay motionless, leaving none to hold back the incredibly ill-advised question. “If you don’t want to talk about death threats, then tell me about your love life.”

Her mouth tightened. “I would rather not.”

“Tell me about lover boy. How long have you been seeing him?”

“You mean Josh? I’ve known him ever since Nick rescued me from Zhoglo. He’s a good friend.”

Her chin tilted up a notch. “You’re being invasive.”

“Yeah? Would you feel invaded to learn that he’s hitting on two girls on the catering staff, in between groping slow dances with you?”

Her gaze dropped, but she did not look as startled or upset about that revelation as she ought to. “You have no right to judge.”

“Wrong,” he informed her. “That ten minutes in Ranieri’s home office two years ago. No matter how long ago, no matter how you’ve ignored me since then, that ten minutes gives me the right to give a shit. Tell me about Cattrell. Are you fucking him?”

“No!” The denial popped out, vehement and breathless.

“Planning to?” he persisted. If this was going to be the definitive crotch kick of reality, then bring it on.

“You’re not involved with him at all,” he said.

“And it doesn’t bug you that he was fondling the waitstaff.”

“No, not anymore,” she said softly. “I’ve known for a long time that he doesn’t have the feelings for me that I’d, um, hoped.”

Hoped? Sveti had hoped, and the guy hadn’t delivered the goods? God, Cattrell must be brain damaged not to hit on that.

“He was touching you as if you were lovers,” he said. “But you’re not an ass-grab kind of girl. You asked him to do that for my benefit. He was a safe date, in case I came to smoke you out. Your human shield.”

Her color rose. “Wow, Petrie. You may be surprised to learn this, but you are not, in fact, the center of all my thoughts.”

“Tell me if I’m right,” he persisted, though he was already sure.

“Get out of my way!” She tried to push past him, toward the door.

He grabbed her. He knew he shouldn’t, but the part of him that knew had no say. The rest of him clamped on to her, nerves jangling at the sweet shock of contact. Laced up into that tight cage of crimson satin, her heat and scent overwhelmed his senses. She strained away from him. Provoking a dangerous, animal urge to drag her close. Pin her down.

“You treat me like I’m a criminal lowlife, out to rape and pillage,” he said. “I’m one of the good guys, Sveti.”

“We’re all bad, then? You lump me in with Arbatov? Zhoglo?”

The mention of the two mafiya vors energized her struggle. He clamped her tighter against his body. Her heartbeat was so frantic and birdlike. She felt so fragile. But she wasn’t.

“I can’t believe we’re talking about my love life when that monster is in the ballroom with my friends and their kids, eating tempuradipped zucchini flowers! He’s committed horrible crimes against innocents!”

“You’re not the only one who tries to protect the innocent.”

She sniffed. “Yes, of course. The police are so very noble.”

She looked down, abashed. “That is true, and I apologize,” she said. “This is silly, Sam. I promise, I won’t be rude to the criminals. I won’t get myself or anyone else killed. Let go. Please. I’ll be good.”

Now she was trying sweet reason. Who cared. She might have gotten a handle on her self-control, but he most definitely had not. His grip did not slacken as he put words to the thought forming in his head. “You know what your problem is, Sveti?”

She tilted a winged dark brow. “I imagine you’re going to tell me?”

“Your love life, the thing with Josh. Me. It’s the same issue. You think sex is frivolous. The real deal is the big bad story of your life. Ogres trying to cut your heart out and sell it. The last-

minute rescue from a grisly death. The hell you went through gives your life purpose. It defines you. The rest is fluff. It doesn’t deserve your full attention.”

“And you think you deserve my full attention, Sam?”

“Yeah,” he said baldly. “And you deserve mine. My full, undivided attention, all over every inch of your body, for a prolonged period of uninterrupted time.”

She shrank away. “I don’t have time for games.”

“Yeah, getting buried in a concrete bridge piling, that’s Svetlana Ardova’s idea of a good time. You must be a lot of fun at parties, babe.”

Ooh, hostile. “You have to let the past go,” he told her.

“Do I?” She shook with a bitter jolt of laughter. “Really! Wow, Sam, thanks for the insight! Like it’s that easy! You have no idea.”

“You’ve still got to let go,” he repeated stubbornly. “The evil vor, the dungeon, the whole fucking horrible mess. You survived. It’s over. The end. Stop dragging that ten-ton weight around.”

“You don’t know shit about it! You can’t say that to me!”

“Of course, nobody can say that to you. That’s why your love life is so hot and happening. All those unsayable things start to choke a guy after about ten minutes.”

“Let go of me, goddamnit!” She flailed furiously.

“But I can say the unsayable. You already think I’m scum. I don’t have to pretend to be anything but a dickhead. Ahhh. Freedom.”

“I never said you were a dickhead,” she whispered.

Happy news, but he wasn’t getting cocky about it just yet.

“Where do you get courage to say unsayable things?” she asked. “All the men I meet are afraid of me. So what makes you so brave?”

He shrugged. “I don’t know. Just dumb that way, I guess.”

There was a floor-length mirror. He tugged her across the floor until they were reflected in it, right down to the pointy toes peeping out beneath the hem of her skirt. She made a distressed sound and fought her arm free to fumble for a tissue, with which she tried to wipe mascara.

She somehow managed to look haughty while mopping up her nose with a tissue. “No, you do not. But you are very intense.”

“Call me Sam.” He bent to smell her hair and she arched away, a tremor rippling through her body. “You don’t have to be afraid of me.”

Laughter vibrated through her. She mouthed the word. Bullshit.

His hand slid over her warm curves, shadowy dips and hollows. He wanted to eat up her delicate scent. Devour it in one breath. Miles could break down those pheromones into their chemical components and list their molecular formulas. But for Sam, it wasn’t chemistry.

It was magic. Crazy, balls-deep enthrallment.

“You just won’t give me a break,” he murmured against her throat. “And I know why. You want to know my theory about you?”

She flinched away as he cupped her jaw, letting her delicate, wispy ringlets tickle his wrist. Insubstantial as a puff of breath.

“I’m telling you anyway.” He nuzzled the whorl of hair below her ear and dragged his lips over the edge of that crimson birthmark. “That day in Bruno’s studio. It was too good for you.”

A burst of laughter shook her. “Really?”

“It made you forget,” he insisted. “For a little while, it was just you and me in the room. No evil vor, no organ pirates. No past. No future.”

“Marco was there. In his crib,” she corrected, primly.

“Whatever. You’re so wound up in this scary story of almost getting your heart ripped out. It defines you. It freaks you out, to be cut loose from that. It makes you feel lost. Scared.”

“Petrie, do everyone a favor, and don’t take up psychology.”

“You lost yourself,” he persisted. “I could help you find it again.”

The frown line between her brows deepened. “You’re so arrogant.”

“That day when I touched you. You came so hard. I dream about it at night. Wake up shaking. Drenched in sweat. So fucking hard.”

She shook her head. “Please,” she whispered.

He rubbed his cheek against that loose, gleaming topknot. “It scared you, baby. You thought you were going to die. But you won’t. I’ll take care of you. You won’t fall to pieces. Or if you do, it’ll only be for a few seconds, and I’ll hold you all together. I’ll hold you so tight. I’ll keep you so safe.” He tasted her, trailing his lips down to her collarbone.

She looked up to meet his eyes. He went very still. The raw pain blazing out of them jolted him right out of his seduction schtick.

“What makes you think so?” he asked gently.

He processed that. “So we’ll work on it,” he offered. “I felt a lot of potential, back there in Bruno’s office. We’ll fix it. No biggie.”

“No biggie, he says.” Her voice was strangled. “Don’t try to rescue me from my past. You’ll just hurt yourself. It’s bigger than you are.”

“How would you know how big I am?”

She shot him a glance and snorted, reddening.

“English is not my first language,” she said haughtily. “Don’t try to trap me in word games. I will never get the joke.”

Shannon McKenna is the New York Times bestselling author of numerous romantic thrillers and several novellas. After a bizarre assortment of jobs, from singing cocktail waitress to medical secretary to strolling madrigal singer, she decided that writing hot romantic suspense suits her best. She lives with her husband and family in a small seaside town in southern Italy. Write to Shannon at her website www.shannonmckenna.com.