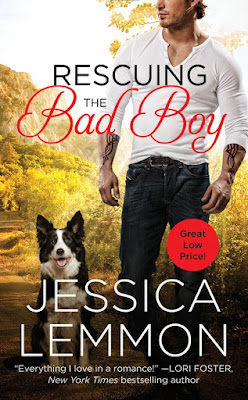 "Not going to be able to stay away from you now, Scampi." - Donovan Pate

NOT ALL SCARS HEAL

For Donovan Pate, the lake town of Evergreen Cove is a minefield of tough memories—including the day he had to let go of Sofie Martin. Years later, he still can’t forget the taste of her lips and the feel of her killer curves. He knows he’s too damaged, that he should stay away for her own good. But what the head says and the heart wants are two very different things…

Seven years ago, Donovan broke Sofie’s heart. Now her career depends on playing nice in order to pull off the charity fundraiser of the decade. She vows to keep things professional…yet working by his side every day doesn’t make it easy to fight temptation, and it isn’t long before she finds herself falling for this bad boy all over again. But loving Donovan means helping him face his past–so they can fight for a future together.

When I pick up one of Jessica Lemmon's books, I know that I'm going to get a sweet, heartwarming romance with a kick of sexy. Her heroes are wounded, not necessarily looking for love, but their hearts are always open. And not to mention, they're also extremely easy on the eyes (and imagination). Jessica's heroines are always strong, independent women with a heart of gold. I fell in love with the first book in the Second Chance series, so my love for Rescuing the Bad Boy came as no surprise. Jessica's characters are written with such warmth that I couldn't help falling in love with Sofie and Donovan. My heart broke for Donovan. His past made him jaded towards the world. He's so hell bent on being alone, he wasn't prepared for the whirlwind of emotions he feels towards Sofie, both seven years ago and now. She slowly brings him back to the land of the living and it terrifies him. Sofie doesn't back down when it comes to Donovan. She'll push him and fight him until he opens his eyes. When he does, their love is magical. I can't wait to see how that love blossoms as they become background characters in the rest of the series.

I adored Rescuing the Bad Boy. Jessica's characters brought sunshine on a gloomy day.  I just had so much fun reading this book and I'm so looking forward to Connor and Faith's book. Until then, I must start Jessica's Love in the Balance series. The mini reunion with characters from that series sparked a fire under my Kindle. I must read them soon!

Her soft touch landed on Donovan’s arm, and the anger shuddering inside him shifted into an ache. She stepped closer, the warmth between them radiating enough heat to set him on fire. But like the fireplaces he built, he could handle it. He could handle the heat from her, not because he was impervious, but because he was strong enough to soak her in and not burn to ash.

She turned his arm where paint was drying. She swiped at it with her sleeve. “I made a mess.”

He’d forgotten about the paint. “Don’t… I can… There is a shower in the…” He lost his train of thought when she turned those emerald green eyes up to him. He watched her delicate throat work as she swallowed. His eyes traveled up her neck and landed on her mouth. Needing her mouth, he lowered his face, watched her eyes grow dark and wide, watched her lift her chin to meet him.

Heat. He wanted more. If only to test his own strength.

He moved his lips gently against hers, but resisted holding her to him. She held onto him though, grasping his forearms with both hands, her fingers wrapped around his elbows. Pressing her body against his, pressing her tits against his ribs.

Hell, sounded like an invitation to him. Deepening their connection, he thrust his tongue into her mouth, reached around, and grabbed her ass with both palms. When he squeezed, she sucked in a breath.

“Not a complaint, Scampi.” He squeezed again. “Perfect.”

Still moving his hands over her backside, he said, “First thing I noticed about you at the Wharf.” He’d been plating up a chicken scaloppini when the manager walked in to show around a few new servers. Two he couldn’t remember, and Sofie. Bent over the plate, he’d peeked between the metal shelves framing that perfect ass . He’d stood to get a better look, and she’d pegged him with those moss-greens.

“Second thing I noticed was your eyes.”

Her lips parted slightly. “And the third thing?”

He kissed her. She tasted incredible. “The first time you talked to me.”

She rolled her eyes. “And what did I say?”

She didn’t think he remembered. She was wrong. “‘Can I get a side of cock?’”

Laughing, she shook her head.

He smiled back at her, unable to help himself. “Then you cleared your throat and said, ‘cocktail sauce’.”

Shaking her head, she said, “Worst abbreviation ever.”

She blinked up at him, studying him, like she was trying to piece him together. He didn't want her to. Once she pieced him together and had the whole picture, she wouldn’t like what she saw.

He kissed her again, keeping his hands on her body.

“Are you testing my boundaries?” she asked, her tone teasing. He recognized that comment from the night he rescued her from Torsett.

“Me either.” At all, actually.

She shook her head, more in thought than in argument. “I don’t think I have any boundaries with you.”

He was beginning to think he had none with her, either.

A former job-hopper, Jessica Lemmon resides in Ohio with her husband and rescue dog. She holds a degree in graphic design currently gathering dust in an impressive frame. When she's not writing super-sexy heroes, she can be found cooking, drawing, drinking coffee (okay, wine), and eating potato chips. She firmly believes God gifts us with talents for a purpose, and with His help, you can create the life you want.