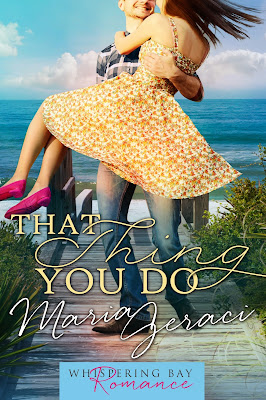 Allie Grant doesn’t believe in second chances. She does, however, believe in the power of a permanent paycheck. So when a tipster reports that the soon-to-be demolished senior center in her hometown is haunted, Allie hightails it to Whispering Bay to get the scoop that could secure her dream job at Florida! magazine. What she finds, though, is far scarier than any ghost. Cue her ex-boyfriend, sexy construction foreman Tom Donalan.

When Tom catches Allie poking around his construction site, he quickly realizes his former high school flame is just as feisty as ever. And, heaven help him, her irresistible, mile-high legs still take his breath away. But Tom isn’t about to delay the building’s demolition because of a silly ghost story.

With neither of the stubborn exes backing down from their opposing positions, sparks fly. And, underneath the surface, the fire of their old attraction burns as hot as ever. When strange things start happening with increasing frequency around town, even a tough skeptic like Tom is tested. The question is, can Allie and Tom stop fighting long enough to get to the bottom of Whispering Bay’s ghost problem—and the more important matter of mending their broken hearts?

Quick! Someone tell me how I have never read one of Maria Geraci's books before now? As usual, I started That Thing You Do late one night and quickly finished it at an ungodly hour. I regret nothing! I may never learn, but I don't regret a thing. This book was a-mazing. Small town romance... Second chance romance... Friends to lovers romance... Matchmakers with the best intentions... That Thing You Do had it all wrapped up a pretty package with an adorable cover. Allie and Tom stole my heart. When I read the blurb and as I started to read the book, I was a little afraid of what Tom did to Allie that hurt her so badly. Out of everything that could have happened, I think what did happen actually made me love him a little bit more. He's not one to run away from responsibility. He may have gone about it the wrong way (especially where Allie was concerned), Tom still did what was expected of him and I'm glad he had a second chance to right his wrong. Allie had me in tears for most of the book. The girl is something else. Allie went through an incredibly heart-wrenching event as a kid and has carried the burden with her ever since. It shaped her into the woman she is in the book. She's strong-willed and a tad on the stubborn side. Heh! I adored the two of them together and I can't wait to get little glimpses of them as we move onto Lauren and Nate's story.

As the first book in the Whispering Bay series, That Thing You Do was the perfect introduction. The characters were lovable, not just Tom and Allie. The background characters warmed my heart just as much. The writing was wonderful. The pacing was perfection. I loved how Maria wove the past with the present. We get glances at the young love between Tom and Allie as we learn how happened that fateful night and how it shaped their relationship in the future. I'll happily devour the next two books in the series. And then I'll be sure to go back to pick up Maria's previous books.

...now if only I could get the song That Thing You Do out of my head...