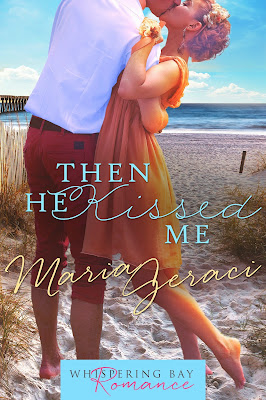 "Sometimes I do exactly what's on my mind." - Nate

Nate Miller may have been a nerd in high school, but now he has a beautiful girlfriend and is set to take over Doc Morrison’s medical practice. Still, the good folks of Whispering Bay find his no-nonsense approach more than a little unsettling, leaving his future in town a great big question mark. And things go even further downhill when his well-intentioned marriage proposal goes awry.

Lauren doesn’t need a man to complete her, yet when she finds herself set up on a date with Nate, she can’t help but notice how sexy and confident he is. In fact, every time the former introvert kisses her, she sees fireworks. But, only a big love will make Lauren change her mind about commitment. As Nate attempts to win Lauren over, a real estate co-op threatens Lauren’s business—and Nate’s ex still has a thing or two to say about their previous relationship. Now Lauren has to decide to go big or go home, in business, as well as in love.

Maria... I have a bone to pick with you. Just when I finally got That Thing You Do out of my head, I get Then He Kissed Me stuck. That's okay. Keep giving me these adorable books and it's all good...

Good golly, I flipping loved Then He Kissed Me. It left me in a giggling mess. I adore Lauren and Nate. They were kind enough to keep me company as I stayed awake thanks to a lousy cold. They made me swoon. I laughed with them. I teared up with them (especially in scenes with Lauren's dad). Lauren Donalan is an amazing character. She's a great friend to everyone and she's on a mission to put everyone's needs above her own. Of course, she started by getting Tom and Allie back together. Now, as she faces a potential heartbreak, she finds herself falling in love again. Nate Miller is an adorably awkward hero. I wanted to hug him for most of the book. Watching him slowly come out of his shell was so sweet. Slowly opening himself to Lauren after what Jessica did... So very sweet.

I loved everything about Then He Kissed Me, from the characters to the sweet and sometimes sexy romance. Of course, we see a lot more of the citizens of Whispering Bay as the series continues. To say they are a kooky bunch would be putting it lightly. I could picture the line of cars driving to the hospital. The character that, I think, stood out the most of Then He Kissed Me was Nate's sister. That girl was freaking hysterical! She was not shy when letting her brother know how big of a fool he was with Jessica. I was cheering her on, not that she needed the help. As for the romance, it was just as sweet as the first book with a touch more sexiness. Sexy time in Then He Kissed Me had a bit more oomph to it. Then He Kissed Me sucked me from the first page and refused to let me go until the very end. Heck, who am I kidding? I'll be under Maria Geraci's spell until I finish the next book in the Whispering Bay series.

Excerpt from THEN HE KISSED ME

When Lauren glanced back at the screen, the ending credits were rolling.

Nate sat up and stretched his arms over his head.

“What did you think of it?” she asked. Please tell me you like it. It sounded dumb, but she just didn’t think she could be friends with anyone who didn’t get It’s a Wonderful Life.

“It was…good,” he said, and she instantly felt herself relax. If Nate Miller didn’t like the movie, he would tell her so. It was just the way he was wired. “Have you ever wondered what it would be like if you hadn’t been born?” he asked.

She stared at him. “Are you kidding? That’s my favorite game. Okay, here goes: If I hadn’t been born then my mother wouldn’t have anyone to boss around. But more importantly, then Henry wouldn’t have been born, and that would be the world’s greatest tragedy.”

“It’s…just the way you do these one word sentences.” She imitated his deep voice. “Agreed. And then there’s my personal favorite. Absolutely.”

He raised a brow. “Why waste words when one will do perfectly fine?”

They both reached for the last slice of pizza and laughed. She nudged it his way. “Go for it.”

“Okay, I think I will this time.” This time? It occurred to her that he was referring to their dinner at The Harbor House, when he’d given up the last scallop to her. She didn’t know why, but she was ridiculously pleased that he’d remembered.

“Do you want any more kids?” he asked casually, but she got the feeling he was deeply interested in her response.

“I would love to have more, but with the right person this time.”

Lauren sighed. “Tom wasn’t in love with me when we got married.” Nate looked incredulous. So she went on to explain. “Most people in town know we got married because I was pregnant. I mean, you can’t really hide something like that in Whispering Bay. But the story’s a little more complicated than that.”

She went on to tell him how she had unprotected sex with Tom on the night of the senior awards banquet and how she broke up with him the next day, only to discover a couple of months later that she was pregnant. Tom had already moved on to another relationship with his current fiancé, Allie. But he broke up with Allie to “do the right thing” and marry Lauren.

“When I found out I was pregnant I was so scared. I hid it from Momma for as long as I could, but then I had to eventually tell my parents. It was awful. I’ll never forget the look of disappointment on my father’s face.”

“I’m sure he was just worried about you.”

She nodded. “I know, but I’m an only child and it’s hard, having all this pressure to be perfect all the time. I guess the hardest thing was knowing that I would never live up to my potential.”

He looked at her. “Is that what you think?”

“I don’t know. I love Henry and I wouldn’t change anything that happened for the world, but having him so young did limit my choices.” She shrugged, embarrassed that she’d told him so much. She’d never admitted that to anyone. Not even to Tom. “So, yeah, I’d like to have more kids, but if I ever get married again, it will be because I’m crazy in love with someone who’s crazy in love with me.
And only me.” She cleared her throat. “What about you? Do you want kids?”

“Definitely. At least a couple.”

She tried to think of how to broach the subject of Jessica, but there was really no delicate way, so she forged ahead. “Did you and Jessica talk about it?”

“She wasn’t sure if she wanted any. I thought it was because she was still young and had just finished law school. But maybe that had been delusional thinking on my part.”

“Have you…been in touch with her since Valentine’s Day?”

“No regrets or second thoughts?”

She wished she could believe him. Could he really turn his feelings off so easily? Lauren didn’t know if that was a good thing, or a potentially bad thing (for her).

“Okay, your turn,” she said. “What would the world be like if you’d never been born?”

“Let’s see. My mom would still have Lanie, and Doc would have someone else working with him. But other than that…” He shrugged, like he couldn’t think of anything else.

“But what about this precious baby here?” Lauren held a sleepy Hector up in her arms. “Who would have taken him in?”

“I’m sure some other chump would have come up to the plate.”

She smiled, then her smile faded. Just two months ago he’d admitted that in her eyes, he was a bad risk. And he was right. He could hurt her. She could totally fall for Nate Miller and he could turn around and break her heart. But she couldn’t seem to help herself. Ask him, Lauren, I’ll bet he says yes.

“But if you hadn’t been born, who would be my partner for couples Bunco?”

“Two weeks from tonight. The first Friday in May. Dress is cocktail casual, or so I’ve been told. It’ll be my first time going and I find myself in need of a date, although, we wouldn’t have to consider it a date.” She paused long enough to catch her breath. “So, what do you say? Are you game?”

She fought back her grin. “That’s exactly what I hoped you’d say.”