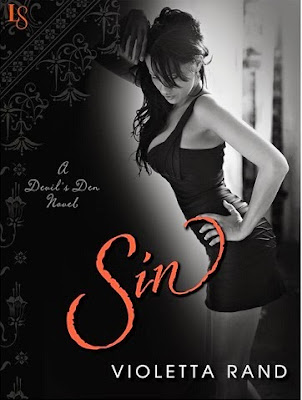 Sin proves that passion goes beyond smoldering desire when hearts dance to their own special beat.

Every woman at the Devil’s Den strip club has a story to tell, and Macey Taylor is no exception. Smart and self-reliant, she’s got a chip on her shoulder, a broken heart, and no patience for a sexy new manager with an Ivy League pedigree and a strict set of rules. Macey prefers to break rules, something she lets Joshua Camden know from the start—even as he ignites a fire in her that goes beyond the hottest club in town.

Joshua is working the Devil’s Den for all it’s worth, learning everything he can about the adult-entertainment game before investing in a place of his own. Macey is a surprise: a woman as strong-willed as she is gorgeous. Joshua wants to get inside her world, to see through her eyes. But he soon discovers that seduction is a two-way street—and expecting redemption without risking his heart may be the greatest sin of all.

Oh, how I have been waiting for Macey's story and here it is! I've been intrigued with her character from the moment she was introduced in the first book. Along the way, there were snippets of her personality, but for the most part, her history was a bit of a mystery. So, I was super excited to start Sin and then devoured it in one afternoon. The book itself started rather abruptly with a short "getting to know you" phase between Macey and Joshua Camden (or just Camden as I like to call him). Macey had just came home from an extended vacation when she finds out that the Devil's Den has a new manager, Camden. The sexual chemistry between Macey and Camden ignites from the moment they lock eyes on each other. With both of their hearts recently broken, they are reluctant at first, but quickly give into their desires and begin a very sexual relationship. I loved Macey and Camden, both as individuals and as a couple. Both Macey and Camden are emotionally guarded thanks, in large part, to their parents. Macey lost her mother at an early age and was left with a father that wanted nothing to do with her. Camden, on the other hand, has both parents, but they are the type to put money ahead of love. Together, they brought out the best in each other. They were able to lean on the other for support and were finally able to open their hearts fully, although that took them by surprise. Both have hearts of gold buried beneath their tough exteriors.

I don't know if Sin is the last book in Violetta's Devil's Den series (I kind of hope it isn't because I think Desire and Dave would make for an interesting story), but I loved it and felt that it was a perfect addition to the series. I loved the raw sexual chemistry between Macey and Camden. Oh my goodness, the man and his possessiveness towards Macey was hot. Although his actions after the big "monkey wrench" was thrown into their relationship made me want to slap him a couple times, his groveling was perfect. I still loved him, though. And Macey, of course. I was hooked from the first page and, even with the abrupt beginning, which was my one point of concern, nothing dimmed how much I loved Sin. 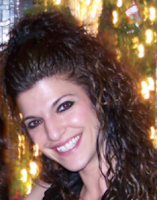 Raised in Corpus Christi, Texas, Violetta Rand spent her childhood reading, writing, and playing soccer. After meeting her husband in New England, they moved to Alaska where she studied environmental science and policy as an undergraduate before attending graduate school. Violetta then spent nearly a decade working as an environmental scientist, specializing in soil and water contamination and environmental assessments.

Violetta still lives in Anchorage, Alaska and spends her days writing evocative New Adult romance and historical romance. When she’s not reading, writing, or editing, she enjoys time with her husband, pets, and friends. In her free time, she loves to hike, fish, and ride motorcycles and 4-wheelers.