Spotlight & Excerpt from For Your Love (Blessings #6) by Beverly Jenkins 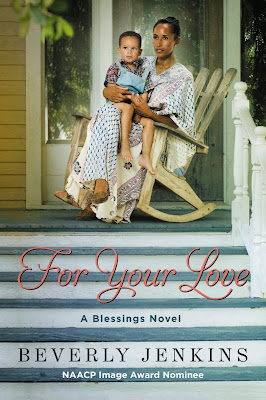 NAACP nominee and bestselling author Beverly Jenkins returns to Henry Adams, Kansas-an unforgettable place that anyone would want to call home-with a story of family, friends, and the powerful forces from our past that can irrevocably shape our future.

Mayor Trent July and his wife Lily are enjoying life as newlyweds and embracing the challenges and joys that come with being adoptive parents to two wonderful boys. But being a father has inevitably forced him to think about his own birth mother. Raised by his grandmother Tamar—and in many ways the good people of Henry Adams—Trent was blessed with a childhood full of love.

But now he can’t help wondering what happened to the scared teenage girl who gave birth to him. And questions that he’s never voiced are now begging to be answered: Who was she? Is she still alive? Why didn’t she want him?

Trent has always believed no good comes from dwelling on the past, especially when you have a loving family, a strong community, and folks who depend on him. But when the past comes to Henry Adams, Trent has no choice but to face it—and the woman who left him behind. The truth will shake his very being and everything he thought he knew about life, love, and the bonds that hold families together…yet can also tear them apart.

Rita Lynn Babcock had a good life. At the age of sixty two she had no health issues, her husband Paul, a cardiac surgeon, still loved her madly, and their daughter, Val was founding partner of an eponymous law firm. Rita was thankful for her blessings but at the moment, her heart was heavy. Two days ago, she’d buried her mother, Ida Merchant.  Except for an indiscretion Rita committed at the age of seventeen, they’d never shared a cross word. Now, Rita Lynn and Paul were meeting with their lawyer in his office to discuss Ida’s will.

The lawyer, Dexter West was an old college friend of Paul’s and he took a moment to look through the stack of papers before him as if to make sure all was in order. The estate wasn’t large. Ida hadn’t been wealthy by any means but she’d been well loved and until her stroke eighteen months ago, maintained her own home and finances.

With Dexter’s guidance, Rita and Paul made the final arrangements for Ida’s earthly possessions, from her house to the ten year old, sky blue Toyota she’d lovingly called Gladys. Her extensive cache of African American history books was donated to the local library, and all the money left in her bank account after her bills were paid would be going to True Saints AME, the church she’d worshipped in and loved for over a half –century. As executrix, Rita affixed her signature to each document Dexter slid her way, and when they were all done, she put her finger tips to the corners of her teary eyes to staunch the flow.

Paul gave her shoulder a tender squeeze and said softly, “It’s okay, babe.” Five years ago, they’d buried his beloved mom, so he understood her grief.

“There’s one more thing,” Dexter said gently. He handed her a sealed envelope. “Your mother gave this to me a few years back.  She asked me to hold onto it until her passing.”

“You should read it.”

His face told her nothing but she had a strong sense of foreboding. She looked to Paul and received a reassuring nod. The letter was one page and penned in her mother’s strong handwriting.  She read the beginning silently but by the mid –point her eyes widened and she whispered in a shocked and broken voice, “No!” The further she read the louder her, “No!” echoed until she was screaming the denial again and again from the depths of her broken heart.