A visit with Sara Walter Ellwood, author of Gambling On A Dream Please join me in welcoming author Sara Walter Ellwood, whose new book Gambling On A Dream releases today! Happy Book Birthday, Sara! To celebrate her new release, Sara is here today to chat about taking creative liberties. An interesting topic for those of you who are aspiring authors.

Take it away, Sara!

Taking Creative Liberties… The Duties of a Texas Sheriff

A few months ago, I read a comment on one of my author loops that bothered me. The author of the comment voiced irritation over how a book she was reading had a Texas sheriff enforcing the law as if he were a police officer. She went on to explain that Texas sheriffs don’t act as police. Needless to say, this struck very close to home, and although I’d researched this before I ever started writing my first western, I wanted to make sure my facts were still correct—even if I did take a little creative liberty with some of those facts.

According to the Texas Association of Counties website (http://www.county.org/texas-county-government/texas-county-officials/Pages/Sheriff.aspx): “The sheriff is the chief law enforcement officer in the county and has a range of duties that include criminal investigations, traffic enforcement, and operation of the jail, including the safekeeping of inmates and operation of the jail commissary. The sheriff also provides security for the courthouse, including the county and district courts, assists with service of subpoena and other process and accepts bail for prisoners in his custody. In a county without a Bail Bond Board, the Sheriff sets bail bond policy for the county. Finally, the sheriff may conduct sales of forfeited property, property being sold at auction for failure to pay property taxes and property sold to satisfy judgments in civil cases.”

Wikipedia (http://en.wikipedia.org/wiki/Sheriffs_in_the_United_States) does state that sheriffs in Texas don’t normally enforce the peace (patrol) incorporated towns and cities, but do police the rural areas of the state. It is true, that in the towns and cities there would also be local police departments where the head of the department would be most likely a police commissioner and/or a chief of police.

One of the most popular tropes in western romance is the cowboy (or cowgirl) sheriff. If an author also includes a suspense/criminal aspect to the story—very likely considering the hero/heroine is a sheriff—there are some things that need to be taken into consideration. One is the need to streamline the number of characters to those that are most important to the story. The second is the demand of the plot.


In two of my fictional towns/counties, McAllister, McAllister County (Heartstrings and my spring 2016 release Heartland) and Colton, Forrest County (The Colton Gamblers), I’ve taken the creative liberty of making the sheriff’s department the sole enforcers of the law, even in the towns, which are also the county seats and the only incorporated municipalities in the counties. I didn’t want to water down the roles of the sheriffs, who are the heroes in my upcoming Heartland, Gambling On A Heart (Colton Gamblers, book 2) and the heroine in Gambling On A Dream (book 3), by adding another layer of law enforcement in the introduction of a police chief who’d have jurisdiction in town.

Here I’m sharing a bit from my latest release Gambling On A Dream, which stars a female Native American sheriff, Dawn Madison, and sexy Texas Ranger, Wyatt McPherson, on the hunt for a murderer…

Dawn pounded on the door of the apartment above a weathered tractor shed at Vaughn’s Farm and Garden Market. “Justin, this is Sheriff Dawn Madison, open up!”

When no response came, she looked over her shoulder at Wyatt. He moved his leather vest away from his shoulder holster and gripped the Colt 45. She took his cue and drew the Glock from her hip holster. With it pointed to the bright morning sky in her right hand, she tried the knob with her left.

The door opened slowly, and Wyatt moved into the dark, rank-smelling interior after he determined the place was clear. He went right into the tiny bedroom; she headed left toward the living space. The action so natural her heart stopped for a split second.

When the stench caused her stomach to churn, Dawn switched to breathing through her mouth. Her eyes adjusted to the dimness, and she scanned the messy room. Beer cans cluttered the tops of an old-fashioned iron sink and an ancient gas stove. Rust splotches pitted the dull white enamel of both.

The door of the 1970s Frigidaire stood open. The light inside flickering over shelves littered with takeout containers and a partial six-pack of Budweiser. A blackened tablespoon, two insulin syringes, and a burned down candle sat on the 1960s era aluminum table. One of the two miss-matched chairs was overturned, and yellowish stuffing poked out of the tears in the sagging greasy couch.

Wyatt’s frustrated voice drew her attention to the doorway into the bedroom. He shoved his Colt into the holster. She rounded the unmade mattress to see what he'd found to make him feel safe enough to put away his gun.

He looked over his shoulder. “Well, we found Vaughn, but I don’t think he’ll be doing any talking.”

The eighteen-year-old lay flat on his back on the putrid carpet, surrounded by dirty clothes. He wore only a pair of filthy boxers. Inches from the bluish fingertips of his right hand lay a wide black piece of rubber and a syringe. Infected track marks darkened the inside of his elbows. But what probably killed him were the three blood-crusted stab wounds in his chest.

His sightless eyes stared at the ceiling, and his normally pale face and the bare skin of his chest had taken on the gray pallor of someone who’d been dead for a while.

She shoved her gun back into her side holster and knelt beside Wyatt. With a long exhale, she said, “You know, the stink when I opened the door should’ve been our first clue. Goddamn.”

Wyatt shook his head and stood. “Looks like the same MO as Larson’s murder.”


“Yeah. Probably killed for the same reason as Chris too. Shouldn’t surprise me. Vaughn’s been a petty dealer and user for years. I thought he was turning his life around after we arrested him in the spring.” She followed Wyatt to his feet, but the action was harder than it should have been. The weight of finding the killer settled squarely on her shoulders. Their only possible lead was literally a dead end. The only suspect was her brother, and she refused to think he had anything to do with this. She unclipped her iPhone from her service belt. “I’ll call it in.” 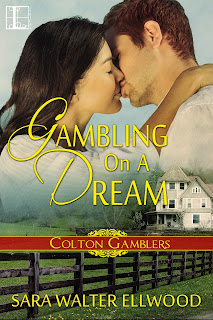 With Everything At Stake….

It’s been years since Sheriff Dawn Madison said goodbye to Texas Ranger Wyatt McPherson. She’s closed the door on the heartache of her past. But when the sleepy town of Colton, Texas, is rocked by a series of shocking murders, Dawn has no choice but to trust the man who broke her heart if she wants to protect the ones she loves…

All Bets Are Off

Four years have passed. But Wyatt hasn’t forgotten the bold, Native American beauty who stole his heart . . . and broke it. Losing her and the life they had hoped to share left him an empty shell of himself. But if he wants to stop the deranged killer terrorizing the innocent kids of Colton, he’ll have to let Dawn back into his life. It’s a risk he’s willing to take, even if heartache is all he takes home… 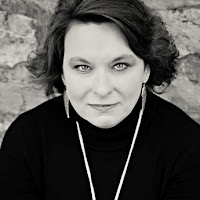 Although Sara Walter Ellwood has long ago left the farm for the glamour of the big town, she draws on her experiences growing up on a small hobby farm in West Central Pennsylvania to write her contemporary westerns. She’s been married to her college sweetheart for over 20 years, and they have two teenagers and one very spoiled rescue cat named Penny. She longs to visit the places she writes about and jokes she’s a cowgirl at heart stuck in Pennsylvania suburbia. Sara Walter Ellwood is a multi-published and international Amazon bestselling author of the anthology set Cowboy Up. She also publishes paranormal romantic suspense under the pen name Cera duBois.