Review of Bind (The Donovan Dynasty #1) by Sierra Cartwright 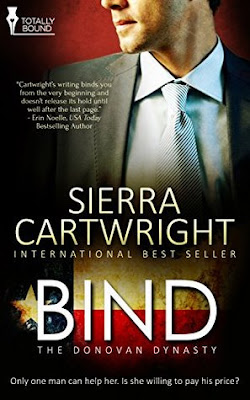 Sierra Cartwright's new series, The Donovan Dynasty, lures readers in with one sexy and powerful family. Bind, the first book in the series, follows Connor Donovan, a man that has had to step up to the plate and help take the reigns of the family dynasty. When Lara proposes a marriage of convenience, Connor agrees with a couple stipulations. You see, Connor is a dominant and he will only help Lara if she agrees to be his submissive. Bind has Sierra's trademark sexiness that'll leave you searching for a fan. The sexual chemistry between Connor and Lara is hot. It was their instant attraction that initially hooked my attention, but as I continued to read the story, it was the subtle blossoming romance that made me fall in love with the book. As much as he tries to fight it, Connor soon finds himself wanting to spend more and more time with Lara. Soon, they both begin to feel things that they never thought possible. I love Sierra's work. Her writing is so very sexy, yet sweet at the same time. Sierra's characters are fantastic. Connor was a sexy addition to Sierra's collection of sizzling hot heroes. Lara had me in stitches more than once, especially with her addiction to a certain tub. Bind was such a fun introduction to the new series. I must admit that I giggled when Sierra "introduced" the connection between this series and her previous Bonds series. That was perfect! I know that the focus of the series is on the Donovan brothers, but I'm secretly hoping the Donovan sister gets her chance. She's a sneaky little devil...