A visit with Lucy Felthouse, author of Sated from the Wild After Dark anthology 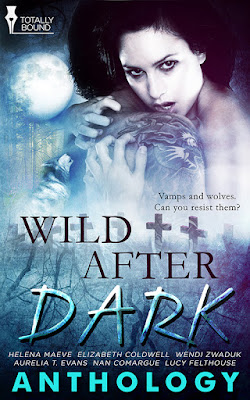 Hello there! Today we are joined by author Lucy Felthouse. Lucy is one of the six authors in the super sexy Wild After Dark anthology from Totally Bound.

Take it away, Lucy!

Why You Should Read Sated

The human woman, Aneesa is gorgeous, sassy, sexy and strong. When I started writing this story, Aneesa did all the hard work for me—she took over and the story ended up coming out in first person, with a very strong voice. She’s fun, and really made me laugh from the very off.

Just to add to the fun factor, her vampire boyfriend, Ace, is also sassy, sexy and strong. And gorgeous, of course. From the very beginning, it was clear to me that this pair were very well suited, both physically and mentally, with their senses of humour and wit bouncing off of each other very nicely, and making for a story with lighter elements, as well as the darkness required by the call for submissions.

Once Aneesa and Ace had established themselves in my mind and started to tell their story, it was obvious to me that the werewolf character I planned to add needed to be different to them. It would be he that added the darkness, the danger, to the story. I can’t say too much more about him or what he does without giving the plot of the story away, but let’s just say he’s a much more serious character than Aneesa and Ace, and yet he still complements them perfectly, making for what I hope you’ll find to be an explosive and very erotic read.

So, if sassy females and delicious alpha males are your thing, then you should definitely consider adding Sated to your to be read list! I hope you have as much fun reading it as I did writing it.

A human, a vampire and a werewolf walked into a bar. Sounds like the start of a bad joke. I can assure you it isn’t. And telling you that, actually, the human and the vampire walked into the bar together, and found the werewolf already there, probably doesn’t make it sound any better. Well tough, because that’s the way it went down.

Ace and I met at a Halloween fancy dress party. I know, I know—cliché of clichés. And yes, he was dressed as a vampire—Albeit a horrendously exaggerated one—all slicked-back hair, über pale skin and visible fangs. In real life, he actually looks no different to you or I. Okay, he is a bit pale. But at the time, I’d laughed at him and asked if he thought vampires weren’t a bit overdone—it was when Twilight was at the height of its popularity—all angsty teens and stalkerish behavior.

He’d laughed right back, a joyous, melodious sound that had heat pooling in my groin—then as suddenly as it had arrived, his mirth disappeared. Then he’d said, “Overdone or not, we’re here to stay. And I don’t fucking sparkle.” 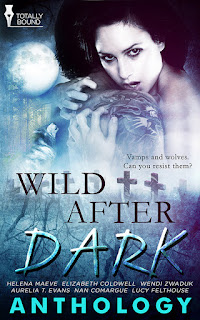 Beyond the Poison Chalice by Helena Maeve

Coveting the enemy is simply to die for.

Claudia Salizar has given blood, sweat and tears to the tenuous armistice between the factions that inhabit St. Louis. She rules the north side with an iron fist, striving to keep the peace between vampires, werewolves and humans no matter the cost. Stumbling across two mysterious intruders who may jeopardize everything she’s worked for is no small inconvenience.

Steal Your Soul Away by Elizabeth Coldwell

Angelique is not like other burlesque dancers—she’s been a vampire for over two hundred years. She meets hot, young sculptor Tom, and his friend, Lucas, a lycan. Desire and distrust mix in an explosive combination as Angelique is drawn closer to both.

Taken in by Wendi Zwaduk

Find what you need at the Store Front. Blood, sex...we have it all just for you.

The Supernaturals have taken over the earth, leaving the humans to serve them. The Store Front is one place for the Supernaturals to find partners for feeding and sexual needs. Vic, a wolf shifter, and Gale, a vampire, have a special human female they love to visit.

It starts as an intervention for a friend. It ends in bloodshed, lust, betrayal and death, as love often does after dark.

When Emily’s husband, Land, calls her to come down to the warehouse district at sunset, she thinks it’s just another job for their para-extermination company. However, he tells her that he’s finally caught Matt, the third member of their team, who was bitten by a werewolf a few weeks ago.

Delia Darker works at her family’s law firm serving vampires and other immortals. She’s suddenly thrown into the nighttime world of music, partying and incredible sex. How can she resist spending the night with Mark Lyons and Caleb Jennings?

A human, a vampire and a werewolf walked into a bar. Sexy is what happens next.

Totally Bound is giving away an eBook of the winner's choice (excluding box sets and anthologies)! To enter, click on the banner below. 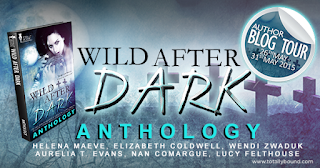