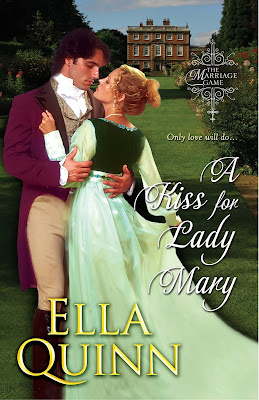 Ella Quinn’s bachelors do as they like and take what they want. But when the objects of their desire are bold, beautiful women, the rules of the game always seem to change…

Handsome, charming, and heir to a powerful Viscount, Christopher “Kit” Featherton is everything a woman could want—except interested in marriage. So when he hears that someone on his estate near the Scottish border is claiming to be his wife, Kit sets off to investigate.

Since her parents’ death, Lady Mary Tolliver has been hounded by her cousin, a fortune-hunting fool after her inheritance. Refusing to settle for anything less than love, Mary escapes to the isolated estate of rakish bachelor, Kit Featherton. Knowing he prefers Court to the country, she believes she will be safe. But when Kit unexpectedly returns, her pretend marriage begins to feel seductively real…

Lady Mary Tolliver heaved a sigh of relief. She’d been at her brother, the Earl of Barham’s, dower house with her grandmother, the Dowager Duchess of Bridgewater, and her widowed aunt, Lady Eunice Phipson, for two weeks now. Thankfully there was still no sign of her cousin, Gawain Tolliver. Perhaps he’d finally given up attempting to compromise her. She’d been taking her regular walks after breakfast for the past week. But this morning she had remembered advice given to her by a friend to vary her schedule as long as Gawain was after her and had decided to go earlier.

She was about a half mile from the house when a familiar male voice asked, “How much longer?”

Mary stopped and scanned the woods. Suddenly, the dark green she’d taken for leaves ruffling in the slight breeze moved revealing a jacket.

Blast it all! It was Gawain, and she’d almost stepped into his trap. She’d known her luck wouldn’t hold. She slipped behind a tree, and listened.

“About another half hour,” a man with a rougher voice answered.

“Have the coach ready,” Gawain ordered. “I want to get away as soon as we grab her.”

She backed up carefully, keeping the dense foliage between herself and her cousin, until she could no longer see Gawain clearly.

“Did you hear something?”

Mary stifled a groan. How far was it to the house, and could she outmaneuver them? She glanced around. It was eight, maybe nine, feet to the old oak tree where, as a child, she’d won many a game of hide and seek. Gathering her skirts, she dashed to it and hid in the hollow part of the trunk. Gawain would have to know exactly where to look to see her. Still, she could not remain in the tree all day. She would have to hope they gave up waiting for her and left, planning to return another day.

“Nah, sir, just a deer or something.”

Several minutes later, Mary shifted and dirt fell around her. This space had been far more commodious when she’d been younger. Something landed on her arm and began to crawl. Stifling a scream, she swatted at it, dislodging more debris. Her heart thudded, making it hard for her to breathe. It was certain her cousin wouldn’t leave until at least the time when she normally passed by. She would just have to run. As they began to converse again, she picked up her skirts and dashed out of the home wood. Once she reached the outer part of the curtilage she raced through the rose garden, staying off the flagstone and gravel paths to the nearest door and darted in.

“My lady,” Cook exclaimed. “You look like the devil hisself is after you.” The old woman narrowed her eyes. “What have you got into? Shake out your skirts before you come in any farther. Is that a dead spider on your arm?”

Mary leaned back against the door, sucking in great gulps of air as she caught her breath. “That might be an apt description.” She briefly considered asking Cook not to tell Grandmamma, but that would only insure her grandmother heard about it sooner. “I’ll be down for breakfast as soon as I wash my hands.”

Ella Quinn lived all over the United States, the Pacific, Canada, England and Europe before finally discovering the Caribbean. She lives in St. Thomas, Virgin Islands with her wonderful husband, three bossy cats and a loveable Great Dane.