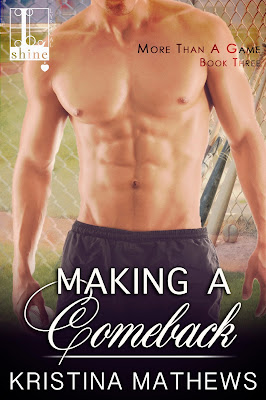 With a divorce in the works, Annabelle Jones heads out to Southern California, the land of sun and starting over. She wants to prove to herself and her young daughters that she still has what it takes to turn heads as a swimsuit model—that she doesn’t need a man to take care of her. Until an accident forces her to rely on the hunky, yet mysterious man next door…

Nathan Cooper is trying to revive his own career. Once a top left-handed relief pitcher, he tried to get over a hidden injury with the aid of banned substances. Not only was he caught and suspended, he was traded and missed out on winning the championship. Now he’s a free agent without a contract, and that means life is ready to play ball… 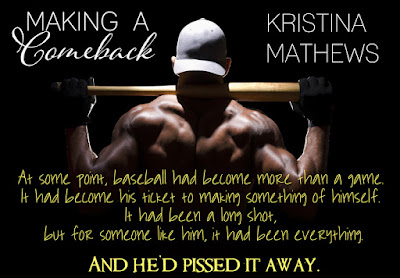 “Hi.” Annabelle stood on his doorstep with a smile and the bottle of healing lotion. “I tried this stuff on my shoulder and it works. It really works.”

“Good. I’m glad.” He was also relieved she wasn’t here for an emergency. “It’s all-natural. Really, not just as an advertising claim. It’s made by a little old lady from—”

“Pasadena?” She interrupted him with a wide grin and a twinkle in her beautiful blue eyes.

“No. Mendocino.” Why did she have to be so great? Funny and sweet and appreciative. Why couldn’t she be more like her ex? A spoiled, rich asshole.

“And have you met this little old lady personally?” She still had a smile on her face. Or most of her face, the left side didn’t quite go up as much as her right, with the giant gash on her face.

He clenched his fists to keep from reaching for her. “Yes. I have. She was at a farmer’s market and she charmed me into buying a whole case of the stuff.”

“Well, I’m glad you did, because it really does help.” Annabelle moved toward him, as if she wanted to come in. Or tell him a secret. “But I can’t reach my back. Would you mind?”

He stepped back so she could come in. She smelled of lavender and rosemary and eucalyptus and something even sweeter.

A hard rock song blasted from his weight room speakers.

“Let me go turn that off.” He moved down the hallway and she followed.

Annabelle stopped in the doorway of the dining room he’d converted to a home gym and laughed. “Is that me? I don’t remember them doing a poster of that cover.”

“They didn’t. I had it done.” It had been ten years ago and he still hung the framed picture in every place he lived. “A buddy of mine worked at this place that could turn anything into a poster for twenty bucks.”

“Twenty bucks, huh?” She gave him a look that might have been disapproving, if not for the way her eyes crinkled at the corners and her lips twitched trying to hold back a smile. “That’s some pretty expensive artwork.”

“I paid another thirty for the frame.” He stood there feeling every bit the twenty-one-year-old who’d been so obsessed with Annabelle he’d convinced his friend to risk his job in making the poster when he didn’t have the rights to the photo.

“Fifty bucks, huh. Quite an investment.”

“I was young. I wanted to class up my first apartment.” He wondered briefly if she would have been interested in him back then. Would she have even looked twice at an up-and-coming ballplayer who thought he was the next hot prospect?

“I was even younger.” She approached the poster he had hanging over his weight bench. There was something almost wistful in her tone. “I was so young.”

He watched her study herself and wondered what she must be thinking. Probably that he was some kind of stalker and she would be calling her lawyer when she got home.

“So you really do use me.” She laughed, turning around to show an amused grin on her face. “Does that help you add cardio to your workouts?”

“Huh?” He was surprised at how lightly she was taking this.

“You know, getting your heart rate up?” Her gaze drew over him, settling just below his waist. “Among other things.” 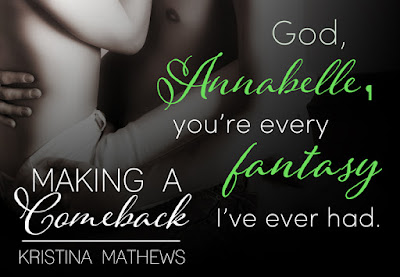 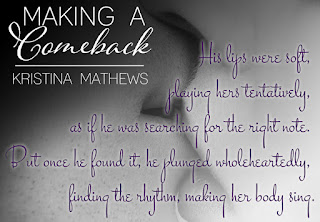 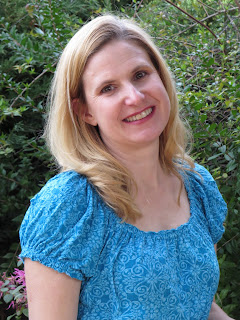 Kristina Mathews doesn't remember a time when she didn't have a book in her hand. Or in her head. But it wasn't until she turned forty that she confessed the reason the laundry never made it out of the dryer was because she was busy writing.
While she resigned from teaching with the arrival of her second son, she's remained an educator in some form. As a volunteer, parent club member or para educator, she finds the most satisfaction working with emergent and developing readers, helping foster confidence and a lifelong love of books.
Kristina lives in Northern California with her husband of more than twenty years, two sons and a black lab. A veteran road tripper, amateur renovator and sports fanatic. She hopes to one day travel all 3,073 miles of Highway 50 from Sacramento, CA to Ocean City, MD, replace her carpet with hardwood floors and serve as a “Ball Dudette” for the San Francisco Giants.