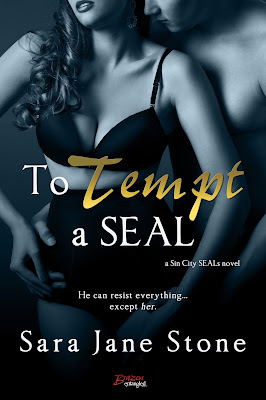 For the first time in her life, social worker Lucia Lewis is ready to live. And the masquerade ball in Las Vegas is just the place to find a ridiculously hot guy to complete her wicked to-do list. The only rule? Her elegant Venetian mask—which conceals the scars that have always held her back from the life she deserves—stays on.

Navy SEAL Cade Daniels heads to Vegas on a mission to keep his best friend's little sister out of trouble. Except the woman he’s sent to find is all heat and flame…and perfectly capable of handling herself. And him. But the moment Lucia's mask slips, the need to heal her, body and soul, is complete and absolute temptation.

But revealing himself could cost him the one thing he isn't willing to risk...his heart.

Honestly, the more I read Sara Jane Stone's books, the more I fall in love with her characters and writing style. I adore her Independence Falls series with Avon and when I saw To Tempt a SEAL, it was lust at first sight. Yes, please! To Tempt a SEAL was such a fun book to read. Not only do you get sizzling hot sex scenes, but you are also treated to an adorable "best friend's sibling" romance. Love 'em! Cade knows that he is in for a world of trouble with his best friend, Natalie, but he can't help himself. The moment he sees Lucia, he was drawn to the shy beauty. Lucia is on a secret mission to fulfill her four sexual fantasies. And boy does she ever! Both Cade and Lucia start off the weekend sticking to the saying "what happens in Vegas, stays in Vegas." But what happens when you don't want it to stay in Vegas? What happens when both start wanting more? Cade's tough "no relationship" mantra dissolves as he gets to know the woman that once hid behind a mask. She her boldness and sexuality starts to blossom, Cade can't help himself. Lucia's never felt cherished and wanted, so when Cade treats her like she is his world, it is easier for her to want more. I loved watching Cade and Lucia grow together. They were so very sweet and kind with each other, as well as so damn sexy. I am so excited to see that To Tempt a SEAL is actually the first book in a new series, something I didn't know as I was reading it, but was hoping it would be. I don't know who's book is next, but I do know who I'm rooting for.

“Don’t tell me you came for the artwork,” a deep, masculine voice said from behind her. She closed her eyes briefly, sucking in a sharp breath at the sound that seemingly had a direct line to the parts of her body craving male attention.

“What else would I come for?” she replied without turning to face him.

“I don’t know about you, but my eye’s been on a table filled with chocolate five feet away,” the mystery man said.

Chocolate. She opened her eyes. Melt-in-your-mouth sugary goodness came a close second to orgasms on her list of wants.

“What kind of chocolate?” She kept her gaze fixed on the bold red brushstrokes running through the center of the first painting.

He chuckled. “I didn’t look too closely. Does it matter?”

“The details are always important.” Like if the man behind her filled out his suit with a body that promised to make her dreams for tonight a reality. “Milk chocolate tastes different from dark. Do they have fillings that melt in your mouth or ones that explode with flavor?”

She felt him move closer. His heat merging with hers. Without the mask, she might have caught a glimpse of him from the corner of her eye, enough to know if the man matched the panty-melting voice.

“You like things that explode in your mouth?” he said, the words a low growl in her ear.

“Yes.” This man could read the phone book and leave her breathless and brimming with desire. But she wanted more than words tonight.

So she turned to face him.

And oh, God help her, she needed a taste of this man. Her lips refused to form the words “but I’m partial to caramel,” because one look and she was partial to him.

Mr. Panty-Melting Voice had a body that begged to be explored, worshipped, and painted. From his square jaw to the way he filled out his tuxedo, he looked as if he was auditioning to be the next James Bond. Maybe he was. This was Vegas, only a hop, skip, and a jump from Hollywood. And in her humble opinion, his short brown hair and green eyes were a lethal combination.

“I’ve been watching you stare at those paintings for the last few minutes,” he said, his full lips offering a hint of a smile beneath his plain black mask. “Without even glancing at the chocolate fountain.”

“There’s a fountain?” She heard the note of longing in her voice. Chocolate, carbs—those had topped the list of diet no-no’s for the past six months. But tonight, everything was on the table.

“Yes. You might have noticed if you had moved from this spot. So I have to ask, are you waiting for your date? A boyfriend?”

“No.” Her breath caught on the one word. This man had to be someone—a movie star, a model, the perfect male specimen—he couldn’t be for her.

But the thought of walking away and finding another man to explore her fantasies? Impossible. In her mind, she would hear this stranger’s voice. She’d spend the next forty- eight hours craving the deep sound, wishing she could listen to him murmur sweet nothings in her ear as they acted out her fantasies—or even better, his fantasies. If she walked away from him now, she would spend every minute until sunrise wondering about his top four, though she had a feeling he didn’t carry around a pink Post-it note with his wicked desires spelled out.