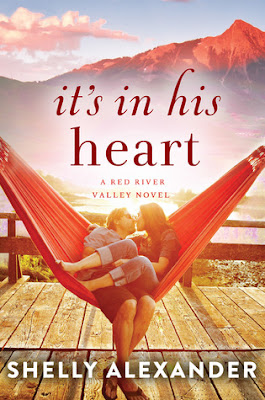 "Jesus, Dennings, you're such a Girl Scout." - Cooper Wells

She has a secret. He has a scandal. And they both have an attraction they can’t deny.

Ella Dennings is furious. Soaking wet, muddy, and furious. All she wants is to enjoy a quiet summer retreat in her Red River Valley cabin. Maybe she can finish healing after the death of her husband, Bradley. Maybe she can even finish writing that third book in her anonymously written bestselling series. But when she arrives at the cabin in a raging rainstorm, who does she find holed up there but Cooper Wells, Bradley’s sexy best friend—a man capable of seducing women within seconds—and a man Ella has never liked.

Coop’s got his own baggage. He’s engulfed in a nasty legal battle, and after selling his home to cover his legal fees, he’s got nowhere to go but the cabin. He and Ella will just have to coexist under one roof...but is their heated animosity boiling over into attraction? And when Ella’s racy new book rocks the sleepy town, will her secret identity spell scandal for both of them?

Shelly Alexander's debut novel, It's In His Heart, was a heartbreaking, yet incredibly sweet romance between two characters that aren't looking for love, especially not with each other. Ella Dennings needed a change in scenery. After the death of her husband, Ella can't stand living in the city that holds so many memories. She packs up her life and heads out to spend the summer in Red River Valley. What she thinks will be a summer of solitude, quickly dissolves when she discovers that her husband's best friend is staying at the cabin they shared. Cooper Wells also needed a change of scenery while he's locked in a legal battle. People he thought were his friend's turned their backs on him as Coop lost his practice. Together in Red River Valley, they overcome first impressions as they grow closer. Time will tell if their hearts have healed enough to have a future together...

I had a little bit of a difficult time with It's In His Heart. I'm not exactly sure why, but I had a little bit of apprehension when I first started the book. In the end, I actually really enjoyed it. Maybe a little on the predictable side, but very enjoyable. I loved Coop. He was adorable and a bit slow on the uptake. And I thought his transformation was fantastic. On the other hand, I had some moments with Ella where I did not like her. Not necessarily with her as a character because I did like her transformation as well. Watching her struggle with the loss of her husband made me a bit emotional. There were, however, a few times where I didn't like what she said to Coop when they are at each other's throats. Other than the couple of times where I wanted to throttle Ella for her words, I was rooting for them from the beginning. I loved them together. I loved watching their hearts mend and meld as the book progressed.

Congrats on your debut novel, Shelly. I'm looking forward to see what you have up your sleeve for the second Red River Valley series.

A 2014 Golden Heart finalist, Shelly Alexander grew up traveling the world, earned a bachelor’s degree in marketing, and worked in the business world for twenty-five years. With four older brothers, she watched every Star Trek episode ever made, joined the softball team instead of ballet class, and played with G.I. Joes while the Barbie Corvette stayed tucked in the closet. When she had three sons of her own, she decided to escape her male-dominated world by reading romance novels and has been hooked ever since. Now, she spends her days writing steamy contemporary romances while tending to an obstinate English bulldog named Lola.