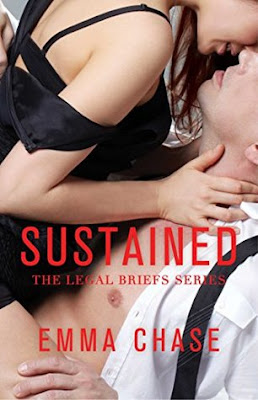 "I'm a lawyer. Asking questions turns me on. Having them answered is pretty hot too." - Jake Becker

A knight in tarnished armor is still a knight.

When you’re a defense attorney in Washington, DC, you see firsthand how hard life can be, and that sometimes the only way to survive is to be harder. I, Jake Becker, have a reputation for being cold, callous, and intimidating—and that suits me just fine. In fact, it’s necessary when I’m breaking down a witness on the stand.

Complications don’t work for me—I’m a “need-to-know” type of man. If you’re my client, tell me the basic facts. If you’re my date, stick to what will get you off. I’m not a therapist or Prince Charming—and I don’t pretend to be.

Then Chelsea McQuaid and her six orphaned nieces and nephews came along and complicated the ever-loving hell out of my life. Now I’m going to Mommy & Me classes, One Direction concerts, the emergency room, and am knee deep in a damn compost pit.

Chelsea’s too sweet, too innocent, and too gorgeous for her own good. She tries to be tough, but she’s not. She needs someone to help her, and defend her…and the kids.

And that—that, I know how to do.

Oh, my word. How have I not read one of Emma Chase's books before? I've seen her first series on Goodreads and Amazon many times. I've even added Overruled, the first book in The Legal Briefs series, to my TBR list when it came out a couple months ago. Now that I've read Sustained, I freaking loved it so much that I bumped up all of Emma's books to my must read as soon as possible list. Sustained was such a fun and entertaining book, I finished it in just a few hours. I should know by now that it is never a good idea to start a new book after a certain time, If I am really into it, I will be up for hours because I can't put it down. That happened with Sustained. I started it at around 11:30 Monday night and I was reading up until 3am. Then I spent the most of the following day with the "one more chapter" syndrome until I finished it. To say I was a book zombie for most of Tuesday would be an understatement. I loved everything about Sustained. Emma's writing is flipping hysterical. The characters were fabulous. I loved that it was entirely in Jake's POV. As much as he claims to be free of shackles, he sure does fall hard and fast for Chelsea and the six little rugrats she calls her nieces and nephews. He's sucked under their spell from the moment he meets all seven of them. For a twenty-six year old, Chelsea is thrown into the deep end when her brother and his wife are killed. She is incredibly strong to become their guardian, although she does feel as if she's drowning more than once. Together, she and Jake make a great team. Absolute perfection!

Now that I've fallen under Emma's spell, I'm hooked. Everything about Sustained rocked my Kindle. And can I just say that I want Rory and Raymond to have their own books in a few years. Those two were hilarious and I loved them. I'm actually excited that this was my first Emma Case book. Now I have her other books to keep me company until Brent's book comes out next January. Woot!

By day, Emma Chase is a devoted wife and mother who resides in a small town in New Jersey. By night she is a keyboard crusader, toiling away the hours to bring her colorful characters and their endless antics to life. She has a long standing love/hate relationship with caffeine.

Emma is an avid reader. Before her children were born she was known to consume whole books in a single day. Writing has also always been a passion and with the 2013 release of her debut romantic comedy, Tangled, the ability to now call herself an author is nothing less than a dream come true.